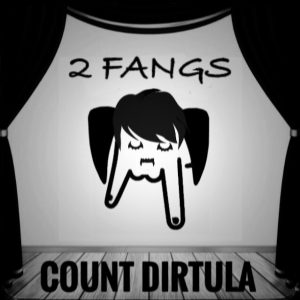 Gather round, mortals – we have a captivating story of the ages for you. Unsure of where he’s truly from, nor how long he’s spent on this earth so far, Count Dirtula has been a performing artist for as long as he can remember. Dirtula has spent much of his eternity developing an affinity for a variety of artistic forms, though music remains his favorite.

And to answer your question – yes, he is in fact a vampire.

“I live within the shadows mostly, but honestly it’s best to say that I reside inside of you. For the blood that flows through your veins, keeps me alive for decades to come. And in return, I create music and art that flows through your mind and soul, and feeds your needs to be entertained. You feed me. I feed you. We are all monsters, you see?” – Count Dirtula

We can’t be sure of his past releases, as Dirtula tells us that any of his works prior to his current release have been destroyed to protect his anonymity. But we can tell you about his most current work, an album titled 2 Fangs. This project is a collection of multiple eclectic styles, blending theatrical, orchestral moments with a variety of rap and rock sounds. The result is an album that knows not the limits of time nor restricts itself to the genres within it – it’s a storytelling masterpiece, combining styles from both modern times and days gone by, making it accessible to both the humans and the supernatural among us. 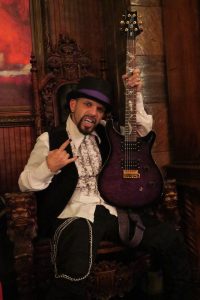 The intro (Our Story Begins) brings us into the story at hand in a captivating, thespian way. Painting an intricate picture of an intriguing and powerful character, the narrator brings 2 Fangs to life with his animated speech. We’re then quickly swept into the first full-length track, Shall We Dance, blending a ballroom waltz with rock percussion and modern vocals that dance between hip hop and pop stylings. The lyrics across the album are often extraordinarily poetic and witty, and they’re on excellent display in this track:

“In the foyer the band plays an entrancing tune.
The Violas veraciously dance with the lutes.
Like an orchestral love story with a tragic conclusion.
You’ll be both smitten and smite in the same afternoon”

Dirtula leans further into the modern sound with rap/rock hybrid track Murder in the Thirst, detailing the many contrasting elements of immortal pleasures versus human ones with an edgy, heavy delivery. Here we learn that Dirtula has been convicted of murder and is sentenced to die, but true to his form, this is not his first rodeo and he’s fairly unbothered by the outcome of this situation.

Title track 2 Fangs gives us a look into Dirtula’s origin story, as he recalls the night he was bitten and transformed into a vampire himself. The production choices on this track’s vocals really sell the transformation – the first two verses are definitively modern rap in style, but in the last verse as Dirtula realizes his new identity, his delivery changes with his story, leaning more into a classical, melodic, spoken-word delivery. It’s an excellent storytelling tool that is used brilliantly here – it seems it pays to have all of eternity to refine your songwriting abilities.

Can’t Get Enough (Your Blood) gives us mere mortals a glimpse into the all-consuming thirst that plagues the day-to-day of a vampire. This driving rock tune’s pounding rhythms and repetitive chorus seem to echo the thumping of human hearts. Bloody Mary drives even further into the modern direction, with its hard rock feel and rapid-fire rap that is perhaps the most impressive on the album. The track is the clear apex of the album, building with a firey intensity that appears to end with a stake through the heart for Dirtula. But as the album concludes, the narrator leaves us on a cliff hanger, suggesting there’s much more to the story than we’re being told… for now.

A standout on this album is Moonlight Soiree, a jazzy, hypnotic number. This track makes it crystal clear that we’re all afraid of the wrong kind of monsters. It’s humanity, perpetrating crimes against itself over and over, that is the most terrifying and authentic source of evil in our world. From allowing the homeless to die in the street to child abductions to death by fire – there is no limit to the atrocities humans are capable of. The spoken word bridge shines an icy, critical light on these issues:

So, while you’re tucked in at night, fearing the boogie man under your bed.
The real monsters are hiding in plain sight.
Your doctors, lawyers, pastors, priests committing the most atrocious crimes every day against their own kind.
Fear not the monsters of fairytales. Humanity is the most evil of all!”

It’s easy to get caught up in the fantastic, supernatural world of Count Dirtula and his stories. But this is an important lesson – don’t be afraid of the creatures that go bump in the night. The real monsters are very likely far closer than you think.

An orchestral journey through the stories of an immortal, delivered in a way us humans can certainly appreciate and relate to. A sweeping collection of genres that blend together in an exquisite way. There’s something on 2 Fangs for nearly everyone – for lovers of exquisite lyrics, of theatrical stories, of hard-hitting rap, and of the best elements of modern rock. We hope to be lucky enough to witness another release from this talented, eternal artist that is Count Dirtula in our lifetime. And we encourage you to dive in and experience his world for yourself… if you dare.

BELOW:  Check out our full artist interview with Count Dirtula, listen to 2 Fangs, and connect with his website and social media platforms, watch his music video, and find his booking & contact information. Please support Count Dirtula by visiting him online, and playing, downloading, and/or purchasing his music, or attending a live show! And, as always, thank you for supporting real music!

Check out our interview with COUNT DIRTULA:

Listen to 2 FANGS by COUNT DIRTULA: