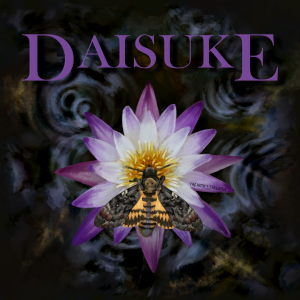 Metal artist DaisukE has only one focus – the music. While they choose to keep their true identity hidden so as not to detract from their work, what we do know is that DaisukE spent months writing and recording their debut release, a concept album titled The Moth and the Lotus.

Dynamics are at the heart of The Moth and the Lotus. There are moments of pensive thought alongside moments of explosive power. DaisukE knows how to use the absence of sound and the subtlety of lighter instrumentation to contrast the firey, commanding moments of rapid-fire electric guitar and guttural vocals. There’s plenty of well-composed guitar riffs, intricate percussion moments, and complex composition to be found across the project as well.

A stand-out track on this album is Death-Head Metamorphosis. Initially released as the album’s first single, this track has an interesting duet-style dynamic in the vocals, and the back-and-forth dichotomy of two opposing forces seems to permeate the entirety of this song. Despite the heavy and dark messaging in this track, there is poeticism in its lyrical presentation:

“The ache of my being
This shameful obelisk I call my home
A monument to all that I don’t want to be
But I’ll build my God
And revel in this holy chrysalis
But I have sinned, for I covet what I see”

This debut album from DaisukE is a fine example of artistry in a genre where it is not often found. Executed with thoughtfulness, intensity, and a keen understanding of balance, The Moth and the Lotus will resonate with metal fans who appreciate the rawness of the genre alongside the purity of creativity. Listen to The Moth and the Lotus for yourself below.

BELOW:  Listen to The Moth and the Lotus and connect with their website and social media platforms. Please support DaisukE by visiting them online, and playing, downloading, and/or purchasing their music, or attending a live show! And, as always, thank you for supporting real music!

Listen to THE MOTH AND THE LOTUS by DAISUKE: