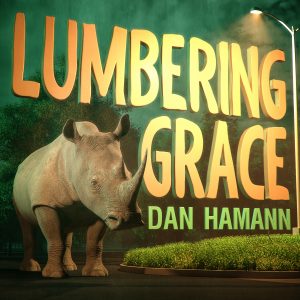 Seattle-based singer-songwriter Dan Hamann has spent a great deal of his life working to blend music and comedy. He studied music in his youth, and his first foray into the arts was as a part of a touring music/comedy duo he was involved in during college. From there, Hamann spent ten years in the local theater scene, before returning once again to comedic songwriting.

Hamann tells us that this most recent project of his was created in place of his large yearly performance; when the pandemic put a stop to that he decided to turn to the studio instead. The resulting album Lumbering Grace is Hamann’s first fully-produced work. And while it may be comedic in nature, both the quality and quantity of musicians Hamann was able to include on this project is quite serious – and quite impressive. There are 64 different instruments performed on this album by 26 different musicians from 12 different countries. In Hamann’s own words, “If I’m going to do this, let’s DO this!” And by every metric, we would say that he has, in fact, done it. Lumbering Grace is as heartwarming as it is humorous, a truly relatable collection of honest and genuinely funny songs that entertains on every level that there is.

With the absolutely dynamic and powerful intro that we’re given by way of the horns section and particularly bluesy undertones from the keys, it would be easy to assume This Shirt Don’t Feel Right is just the compelling beginning to a soul-fusion album. But then the lyrics – carried by Hamann’s boisterous, theatrical voice – quickly reveal that this is something more than that. By the end of the second verse, you’ll be fully engrossed in the message – who hasn’t worn an old outfit a half size too small and regretted it all day long? It’s a great blend of exceedingly impressive musicianship and the kind of storytelling that resonates with everyone in the room.

Hamann is a self-proclaimed lover of “genre-hopping”, and that is on full display in this project. Each track seems to sit in its own bubble of style, fearlessly blending and combining instruments and tones without any worry of working within expectations. The haunting, dark tones of Block Captain would likely be found nowhere near the eccentric and lighthearted timbre of Mighty Illusion on any other project. But here, on this cinematic story scape of an album, it feels entirely effortless track after track.

Writing stories that we can all relate to seems to be a particularly strong point of Hamann’s. The Dog Song is practically a battle cry for pet owners, echoing a sentiment every person who has ever owned a dog has undoubtedly found themselves thinking: “For the love of God, shut up and lie down.” Pico de Gallo is another great example of this, and also perhaps the only song in the known universe about the particular subject of scooping up too much dip with your chip. But despite its uniqueness as a topic, it is nonetheless the kind of moment that has a bit of universal understanding among people. You’ll laugh when you hear it because it’s like Hamann is talking about you.

There are a few more somber moments across the album – equally as smart in their construction, but a bit more nuanced in their meaning. Perhaps the best example of this is in Blue. The orchestral arrangement following the intentionally static intro is a great storytelling tool, and the descriptions of each different blue thing are wonderfully vivid. But after line upon line of fascinating descriptions, the last verse is perhaps the best:

“And I know in my heart,
If I’d never met you
I’d have spent my whole life
Having only seen blue.”

There’s little more endearing than a quirky love song, and Spider Bridge is as quirky as they come. In line with the likes of John Prine’s “In Spite of Ourselves“, we’re given the entire picture of the relationship – the romance, the banter, the struggles, the personality. It’s practically a rom-com in four minutes. But when you pull back the layers of comedy surrounding an irrational fear of spiders, there are some incredibly poignant points being made. Hamann says it best towards the end of the track:

“Look, she finds them irrationally scary
Because they move weird and they’re hairy
And she’s scared of them nearly to tears
And I say to you,
This world could use a lot more Holly Sue
Cuz that’s how she treats something she fears“

Did we mention that this all sits upon a stunning classic country style ballad arrangement, complete with the perfect amount of pedal steel and violin? Hamann is full of surprises, and not a single topic nor genre is off limits.

There’s something a little bit magical here on Lumbering Grace. Maybe it’s the sharp wit and unapologetically funny writing, maybe it’s the absolutely killer lineup of musicians playing on this project, maybe it’s the realness of it all, the little relatable piece of humanity that seems to shine through on each track and leaves a lasting impression on each listener – or maybe it’s a little bit of each of these. Dan Hamann really has something special brewing here, with his unique worldview and uncanny ability to tell stories – both the complex and the mundane – in a way that is truly captivating. If you’re even remotely appreciative of the blending of music and comedy by way of incredibly well-crafted songs, do yourself a favor and set aside some time to sit down with this one. You can thank me later.

BELOW:  Listen to Lumbering Grace by Dan Hamann and connect with his website and social media platforms. Please support Dan Hamann by visiting him online, and playing, downloading, and/or purchasing his music, or attending a live show! And, as always, thank you for supporting real music!