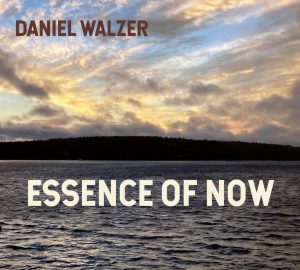 Indianapolis-based artist Daniel Walzer is a true jack of all trades. As a multi-instrumentalist, composer, and audio engineer, along with his formal percussion background, Walzer’s resume is as lengthy and impressive as his list of credentials. He’s worked on over two dozen albums, his music has been featured at the New York Electroacoustic Music Festival, the International Computer Music Festival, New Music on the Bayou, TUTTI New Music Festival, and labels including Janus Music and Sound.

The complex blending of genres on this project is apparent from its opening measures. In Metalaqua, we’re treated to an intriguing mix of classical composition delivered by unquestionably modern instrumentation.  The melodies, the call-and-response phrasing that permeates the track – they’re clear beacons of the compositional side of Walzer’s skillset. But the electric guitar, the synths, the uptempo pop-tinged percussion section – these modern elements seem to blend seamlessly with the more traditional structures of the track.

This sort of cohesive blending is at the center of this album as a whole. In Unity, a modern rock drum beat is the supporting structure for a host of particularly jazzy chords, which are later joined by a brief arrangement of strings, then synthesizers, then an electric guitar solo. On paper, these kinds of combinations sound disjointed, but in Walzer’s execution, the work moves seamlessly from section to section, moving in and out of tense, dissonant moments into refreshing resolutions like waves on the ocean.

The Test has one of the most interesting juxtapositions on the album. At first, it seems as if the main riff may be leaning in a country/western direction, until a few chromatic notes appear and clarify that this is most definitely of eastern influence. It continues to walk this line for the entire first half of the track, blending both eastern and western instruments with melodies of the same. Then it eases us gently into a much softer, piano-led section, radiating serenity and gentleness as it fades away.

We also love Marauder for its anthemic ballad feel at the start, its slow, sweeping melody and booming percussion giving way to an intricate display of saxophone work. The music-box-esque melody at 3:09 is a particularly nice touch, nostalgic and simplistic in its beauty. Nebraska is also a standout, brimming with energy and bouncy (yet subtle) instrumentation, until directions are changed entirely at around the halfway mark and we’re treated to one of the album’s catchiest melodies over rich layers of bass and synths.

We love Stand Up for its two most unexpected components; its unexpected energy and unexpected collection of instruments. In the first 30 seconds, there are clear references to rock, funk, Latin, jazz, and EDM, if not more. Walzer is perfectly comfortable writing parts for instruments that give each track texture while still remaining true to the influence he’s looking to highlight. It’s the commitment to each instrument’s expected style that puts Walzer’s work head and shoulders above his peers. This kind of blending that stays firmly on the side of unification despite the non-traditional assortment of instruments is a challenge both in composition and production, but it feels effortless in this track and across the project.

Instrumetal music that pushes the boundaries of expectation. A classical foundation but truly modern execution. Essence of Now will resonate the most with those who enjoy complexities and intricacies in composition and extremely high-level execution on both the performance and production fronts. The bold and artistic work of Daniel Walzer is an extraordinary example of what can happen when an experienced ear blends the traditional with the contemporary.  The resulting work is inventive, inspired, and brilliant.

BELOW:  Listen to Essence of Now and connect with his website and social media platforms. Please support Daniel Walzer by visiting him online, and playing, downloading, and/or purchasing his music, or attending a live show! And, as always, thank you for supporting real music!

Listen to ESSENCE OF NOW by DANIEL WALZER: