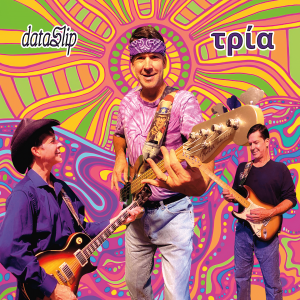 Below, you can read our interview with artist Bradley Martin of dataSlip and listen to their album Tria . Check out our full music review of Tria, HERE.

Q: Great to be speaking with you, Bradley! You’re currently based in Virginia’s Shenandoah Valley. What is the music scene there like?

A: Slowly emerging from the COVID setbacks. It has been hard to meet new musicians and that has spurned me to be the best 1 man band I can be. I play guitar/bass/keyboards and I produce in my well equipped studio.

Q: Being a one-man-band requires quite a bit of musical prowess. Has music been a lifelong passion of yours?

A: Yes of course. My parents had a old stereo record console that we would play those wonderful LP’s on as a kid and they seemed like magic and a portal to another dimension.

Q: You’ve assembled an impressive list of contributing musicians for “Tria”, including Jim Riley of Rascal Flatts and Country Music Hall of Fame member Brent Mason. What was it like working virtually with these world-class players?

A: I usually work directly with Bill Watson producer/studio owner of Nashville Trax and he records the drums or guitars to my notes and demos and click track with rhythm playing and sends me those files to mix in to create a complete song. I also work directly with Air Gigs for drums (Brian Petry) and Soundbetter for vocals (Scott Foster Harris)

Q: Did you have any other bands or solo projects before dataSlip, and is the solo approach to writing and recording something you’ve always preferred?

A: I have been in many bands that have broken up for various reasons. I try to work with local musicians to record their original material so they can play live or at least have a record of their music. A band I was in before dataSlip is Six Towers band with my family and we released a CD in 2017.

Q: How long did “Tria” take to record?

A: Most of the songs were recorded in the last year or 2, but “60 Miles to Paradise” was record 5 years ago for example.

Q: dataSlip’s music could be defined as activist-country/rock. What inspired you to write in this particular genre?

A: A big, ole acoustic guitar for my 7th birthday. It is long gone, but a picture of me with it exists somewhere!

A: With my non-touring studio band the best possible explosion would be a famous musician license 1 or more of my songs. I.e Gordon Lightfoot cover ” LeLawala” or Lynyrd Skynyd cover “60 Miles to Paradise”

A: Yikes–anyone? Ronnie Van Zant. Long gone, but a true genius at lyrics and singing. He never wrote down any lyrics to his songs, all in his head.

A: Lynyrd Skynyrd “One More From the Road” Fantastic live album. I spent many nights hearing Rossington/ Collins duel on lead guitars and when the Compact Disc came out.. wow!

A: The Needle and the Spoon. Incredible anti hard drug song from Skynyrd with biting lyrics and a great wah-wah solo from Allen Collins. I loved to play along with this song when I was learning guitar.

A: I’d like to ask the readers of this interview to name my next Album!

<< Go to our full music review of:  Tria by dataSlip

Listen to TRIA by DATASLIP: