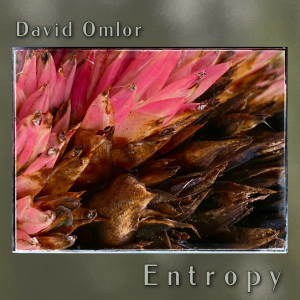 Singer-songwriter David Omlor might describe himself as an average guy, but the music he’s created on his most recent album Entropy proves that he is anything but. Beginning his music career in the 80s in Philadelphia, he currently resides in Florida and performs with the band Benjamin Road when he isn’t working on solo material.

Entropy, like so much of the best music that was written in the last 12 months, was born out of a quarantine lockdown. Omlor collaborated with musicians across the U.S. while writing and recording these songs, with an end goal of emerging from this dark and turbulent period with hope and optimism. A single free-form poem composed late one night kickstarted this particular project. From there, Omlor has drawn on personal struggles and complex pandemic-related emotions, creating dynamic and compelling tracks that are relatable explorations into some of the past year’s challenges for both himself and for us all. 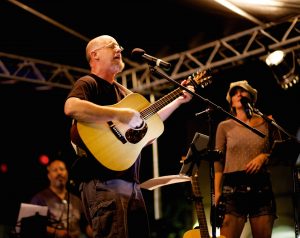 The album starts with the light and relaxed Let You Know, and the echoes of the start of the pandemic are heard quite clearly – who didn’t spend the early days in isolation “just trying to make a good thing”? The laid-back attitude of this track bolsters this sort of “go with the flow” energy that this track is channeling.

This is followed by the stoic and somber Truth, a gorgeous arrangement of piano and acoustic guitar as the base of this number. Omlor gives this song a real sense of authenticity with his vocals – nothing showy or overdone, just a straightforward, strong, and soulful voice that carries the weight of these tracks. The smattering of tasty, bluesy guitar riffs and the rich layers of harmonies make this song a stand-out on the album.

We also love Percy’s Song. Born out of a combination of a play on the Frankenstein story as well as Omlor’s own appreciation for his wife’s steadfast support through his darkest hours, this is a melancholy and wildly creative track. It’s some of the most compelling lyrical content on the album, haunting but beautiful all the same:

We also love the concluding track Overflow. Omlor tells us he wanted the feeling of “being lifted out of darkness” embedded right into the production. This track begins as a lo-fi piece and slowly transitions into studio-quality audio, creating a sense of growth and change in a positive direction. This kind of thought-provoking production is quite the rarity and incredibly intriguing to listen to. Not to mention the inspirational message and theme of overcoming dark times makes this a perfectly optimistic closing track for this project.

On this album we find two versions of It Ain’t Over, and while they’re both brilliant and have a bit in common, the tracks have a distinctly different feel depending on how the music was composed.

The first resulted from an experiment Omlor conducted with his bandmates. He tells us “I would write and record a song and each musician would then create their own parts without any knowledge of what the others were doing. We would put all the parts together at the end and see what we ended up with.” In listening to this track, you’d have no idea it was created this way as it is a remarkably smooth piece of music, with a swanky blues foundation and hints of pop-rock overtones in the chorus.

It Ain’t Over V2 was conceived in an equally interesting fashion – when conducting the initial experiment for this song, one of the contributing musicians Andy Bresnan asked for a version of the track with vocals alone to work with. He went on to build an entire arrangement around the existing vocal line, and the results are exceptionally different than the first version. (Dare we say better?) Bresnan built a version of this song that feels like Joe Cocker on vacation. The vocals maintain their grit from the original track, but they’re backed by a dazzling display of classical guitar, strings, trumpets, and marimba. Simply listening to these two tracks back to back is fascinating on its own, but this second version is just a pure showing of raw compositional skill on Bresnan’s part.

This is the kind of album that’s a true joy to come across. In making Entropy, not only was David Omlor willing to experiment – to step far outside the bounds of traditionalism and expectation – but he did this while also bringing his own heartfelt stories into the fray and presenting them in a truly relatable way. Top that all off with a phenomenal lineup of musicians behind him, and there’s just so much to like about this project. If you’re looking for something that will resonate with you as well as surprise you, something thought-provoking as well as genuine – give Entropy a listen, and thank me later.

BELOW:  Listen to Entropy by David Omlor and connect with his website and social media platforms. Please support David Omlor by visiting him online, and playing, downloading, and/or purchasing his music, or attending a live show! And, as always, thank you for supporting real music!

Listen to ENTROPY by DAVID OMLOR: