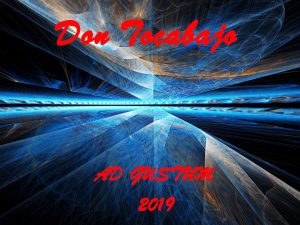 German bass player, composer, and producer Don Tocabajo has known for a long time that composing music was in the cards for him. Purchasing his first guitar with his childhood savings, it didn’t take long for him to discover that the bass guitar was where his musical heart truly resided (in fact, his name directly translates to “Don who plays the bass guitar” in Spanish). He’s most recently been working on his solo project and has released three albums, including Bass 4.0, Big Bang, and his most recent release, Ad Gustum.

Meaning “to my taste” in Latin, Ad Gustum is an instrumental album with notes of funk, rock, Latin, and metal. Each step of the process – from composition to recording to mastering and everything in between – was completed by Tocabajo alone. But you’d never know that this was a one-man show to listen to it, as Ad Gustum is a vibrant, energetic, and funky collection of tracks that  was awarded “Best Instrumental Album” at the 2019 German Rock & Pop Awards – and rightly so. 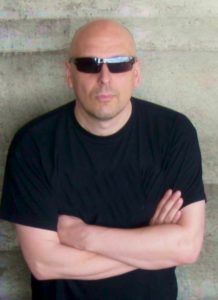 The album opens with the spirited and endlessly funky Let Me Touch You. The rapid-fire speed of the bass, the punchy horns section, the relentlessly driving rhythm – this track radiates energy and sets the tone for the entire project. And when the heavy guitars make their appearance around 30 seconds in, it quickly becomes clear that this is a eclectic, exceedingly rare, and yet excellently executing melding of genres.

Revuelto leans even further in a funky direction at the start, a particularly bouncy bass line driving the majority of the track early on. The intricate percussive rolls are highlighted wonderfully here, adding decisively tasty Latin flavor. You also start to get a sense of Tocabajo’s compositional style by this point in the album – he writes complex melodic phrases to lead, and layers them with more simplistic lines to add body and balance to the track, but he’s not afraid to let each section take on a totally unique feel (case in point, the Asian-inspired guitar breakdown that closes out this song).

The title track Ad Gustum starts on a heavily electronic note, and trends in a rock direction the whole way through. A particularly interesting feature that is seen across the project but is showcased so well here is the bongo-esque percussion combined with the heavy electric guitars. In many circumstances, it would seem like the extreme differences between two elements would probably result in being unable to combine them. But in this track, the light percussion provides texture and intricacies that work well with the demanding and driving nature of the heavier guitars. It’s wildly unusual and thoroughly enjoyable.

Agridulce is heavily percussion lead, a definitive Latin flair permeating this track even as the expected arrival of a funky bassline occurs. This track explores a number of more dissonant sounds, veering away from predictable major melodies in many sections. But it’s done with a careful hand – at no point does it become hard to listen to, something that occurs regularly when composers veer into less tried-and-true territory. The fact that it remains melodious and easy to follow throughout is a testament to Tocabajo’s compositional skills.

Sweet Waste is another unapologetically funky track, with complex horn melodies, and a very traditional funk feel to start. And while each funk-driven section has its own melody and feel, we’re regularly treated to a respite from all that funkiness, broken up by the multitude of guitar parts and percussion rolls as transitional elements.

Alles Togo closes out the six track album, with an introductory bassline that verges on progressive-alt-rock. This track is unique in its overall feel, a bit darker and more ominous than the previous songs in this project. But it still contains all the elements we’ve come to expect from a Tocabajo song – the horns are there, but with more of a drone than a vibrancy. The bassline is funky, but the riffs performed are of a more minor variety. This shift in direction opens the door to other types of compositions for Tocabajo, highlighting his ability to compose with intention and direction.

Bold, expressive, and musically explosive. Bass-lead instrumentals that dive and dip into so many different styles that you’d expect cacophony, but are treated instead to a wonderfully melded collection of complex tones and melodies. It’s tempting to call a work like this experimental, if only due to the very atypical combination of genres on this project. But in many experimental works, there is struggle – sections that don’t work, combinations that need further refinement – and those issues simply do not exist on Ad Gustum. It’s so very clear that Don Tocabajo has boldly gone headfirst in the direction of the sound he’s looking to create, and in pursuing it without fear or commitments to expectation, he’s created a composition that can be defined in perhaps just one word: brilliance.

BELOW:  Listen to Ad Gustum, and connect with his website and social media platforms. Please support Don Tocabajo by visiting him online, and playing, downloading, and/or purchasing his music, or attending a live show! And, as always, thank you for supporting real music!