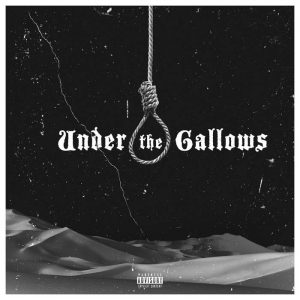 The debut release from hard rock duo Under The Gallows has been a long time coming. Members Brandon Gallemore (vocals, rhythm guitar) and Sam Thiebaud (lead guitar, vocals) originally met each other in high school. As with many childhood friendships, the two grew apart as they grew older, until they finally reconnected two years ago in Denton, TX. The old friends quickly got to making music together and earlier this year officially formed the band.

It wasn’t long before Under The Gallows was in the studio working on their first album. Recording with a producer that was originally an audience member for a few early shows, they began production in February of this year and released their self-titled debut in July. The album is an impressive first work, defined by its raspy, soulful vocals, intricate guitar work, and dark but passionate energy on each and every track.

The album opens with Your Way, and the band wastes no time bringing their strengths to the forefront. Brandon’s vocals are a great mix of rough and ragged yet still plenty melodic, a rare treat in this genre. Sam’s guitar work is also immediately on full display, with complex riffs with influences from both metal and rock styles appearing regularly throughout the song in a very free-form style. These two features are consistently highlighted across the album, and although there’s plenty of other things to enjoy as well, these are the elements that draw the listener back in track after track.

Insomnia is a more somber track with mellower energy, a bit of melancholy feel in every aspect of the track’s instrumentation. The vocals really shine here, ripe with feeling and intent, carrying the emotional weight of this track through to the explosive final minute. The slow build to the intense peak at the end is a great production choice.

The flow of the album is notable, walking the listener through Under The Gallow‘s varying tones within their genre in a way that makes a lot of sense. For example, there’s a touch of Americana energy on Everyone Dies, the major chords and uptempo rhythm giving the track a brighter feel than many of the others on this record. The juxtaposition breaks up the record nicely, and it also speaks to the range of the band. This is followed by Pigs, which is definitively darker but still maintains a moderate energy and the slightest hint of that Americana feel, before working on into darker tracks like Leave the Piece. It feels like the tracks were arranged in an intentional order rather than just thrown together, and we appreciate that attention to detail.

Charlie is another stand out track and a great closer. Putting Brandon’s impassioned vocals and Sam’s freeform guitar solos back on full display, they both have plenty of time to shine. The guitar work at 3:53 is especially nice – Sam shows off his shredding skills on many occasions all over this project, but combining that with some more intentional, melodic phrases makes it clear that his skills are far beyond just superficial.

If you listen past the end of Charlie, you’ll come across a bonus track – and we highly recommend you take the time to find it. A simple but absolutely captivating number, this track features solely vocals and acoustic guitar, a surprising find on a true rock record. But frankly, that’s all this song needs. It appears that Sam sings the lead vocals here, and his performance does not disappoint, lending a raw, bluesy, gritty edge to the track. This, paired with astonishingly intricate guitar riffs as the backbone of this song, makes this a thoroughly fun listening experience.

Strong vocals, emotive songwriting, impressive guitar chops, and a definitive identity through sound – there is so much to like about this debut release from Under The Gallows. This is a band who has let their desire to find their niche within their genre guide the creation of this record, and that freedom of expression shows that they’re an incredibly capable group with a bright future. The band has spoken of plans to release another album by the end of the year, and you better believe we’ll be keeping an eye out for it.

BELOW:  Listen to Under The Gallows and connect with their website and social media platforms. Please support Under the Gallows by visiting them online, and playing, downloading, and/or purchasing their music, or attending a live show! And, as always, thank you for supporting real music!