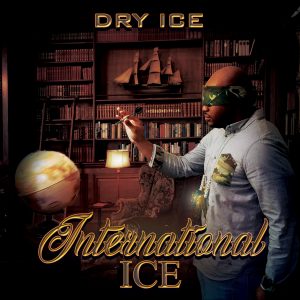 Describing himself as an army-brat while growing up; Tallahassee, FL hip-hop artist, world-traveler, reality internet-TV show host, and CEO, Dry Ice (a.k.a., Alvon Jackson), caught the travel-bug early enough in life that it became a permanent ailment.

Using the moniker his boys gave him as a cool-headed kid running the streets, Ice joined a hip-hop group during his brief attendance at Florida A&M University, ultimately giving him the taste of the entertainment lifestyle he was waiting for.

Now, years later, Jackson is the CEO of his own entertainment company, Believer Entertainment, whose current project is the travel-based reality-style internet-TV show called, Give Us The Strength (G.U.T.S.). The show’s premise is admirable:  Open people’s hearts and minds by showing them the world.e

Needing a sound-score for the show—and just happening to have solid mic skill—were all the kismet needed to give birth to Dry Ice’s debut hip-hop album, International Ice; a project he describes as, “…hip hop’s first travel oriented mixtape.” We think it’s a creative and killer concept.

“We all have to share this beautiful planet. We might as well enjoy each other’s company while we are here.”

Isaiah 54-17 is your classic status track; a grimy braggin’-and-boastin’ cut with little more than a dope bass-line and a few keys…

“Ma don’t be worryin’ ’bout me, no weapon that’s formed against me shall prosper…” 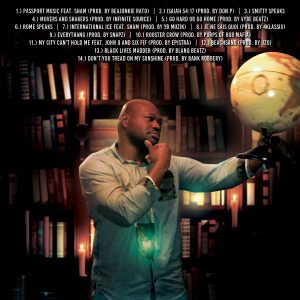 Je Ne Sais Quoi has a smooth Pharrell-esque vibe. More than any other track on International Ice, this one belongs on the summer-time radio in some hemisphere, somewhere. Be sure to stick around for the tricked-out guitar solo at 2:03.

“…an extra special shout-out to all the black women that’ll get their hair wet… You hold a special place in my heart. Let’s go to the beach.”

In response to the times, Black Lives Madder offers Jackson’s articulate and ice-cold examination of his experience of the Black Lives Matter movement. As a hip-hop fan, the writing and flow are as veteran as you may ever encounter. The track is over 4 minutes of verbal samurai assaultisms…

“This is black lives matter, you won’t like me when I’m angry
Stick my neck out for the cause, you have to hang me
We been through pain, we treated inhumanely
Cuz my skin hue plainly still offends you daily…”

In Conclusion…
At its heart, International Ice is a collection of articulately expressed observations, performed by a practiced and witty MC, about the world he loves and travels upon. In the grand tradition of hip-hop, Jackson is sometimes clever and sometimes wise, sometimes verbose and sometimes honest—and always skilled in the delivery. In terms of sound quality, superb production has created an end-result whereby each track is radio-ready. It’s an impressive effort for an internet-TV reality show, and we think it could do even more.

BELOW:  Check out our full artist interview with Dry Ice, listen to music from Dry Ice’s album, International Ice, connect with his website and social media platforms, and watch his reality TV show, Give Us The Strength. Please support Dry Ice by visiting him online, and playing, downloading, and/or purchasing his music. And, as always, thank you for supporting real music!

Read our artist interview with Dry Ice (a.k.a., Alvon Jackson):

Watch Dry Ice’s reality TV show, Give Us The Strength: