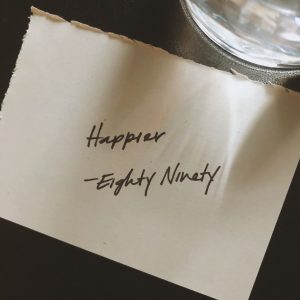 Eighty Ninety consists of Brooklyn-based brothers Abner James (vocals, production) and Harper James (guitar, production). The duo is known for their intimate songwriting and minimalistic production in a style they call “808s and telecasters”, often choosing to let the emotion of the song dictate their instrumentation choices rather than any set genre conventions.

Their most recent release conjures images of loss and loneliness, themes that so many of us can relate to during these unprecedented and isolating times. The band says of the inspiration for the track: “There are so many people we love and miss that we can’t be with, and a lot of late night calls to try and bridge that distance.” But the song also carries a message of hope and knowing that while sometimes letting go is the right thing to do, it’s okay to hang on for just a little longer.

The song itself is delicate in production but the instrumentation that is present feels very intentional, with an understated yet firmly driving beat that keeps the song moving. The vocals from Abner are airy and graceful, lending an authenticity to the lyrics that could otherwise feel forced. His gentle vocal stylings pair so effortlessly with the mixed emotions evident in the underlying message.

The lyrics in this track are as concise as they are insightful – a challenging accomplishment in songwriting that feels perfectly natural in this song. The lyrics in the outro are especially powerful, a slight twist on part of the refrain that puts the melancholy punctuation on the end of the sentence:

“I can’t hear you, you’re breaking up
I know we’ll never have the life we’ve been dreaming of,
Just promise me that you’ll fall in love
But that you’ll wait til the morning.”

The chorus is the melodic high point – another nod to Abner’s ethereal vocals, but a performance that is accessible and immediately memorable. In fact, the up-and-down nature of the melody in the main hook seems as if it’s a symbolic representation of the message in the track – it’s the “I hope you find what you’re looking for” optimism so sharply contrasted with the downturn of the “I wish this wasn’t ending” undercurrent.

Happier is an emotional, honest effort from Eighty Ninety. They’ve set the bar high and cemented themselves as a group to watch this year. In fact, you might say we’re happier now for having come across this duo, and we’re greatly anticipating the releases to come.

BELOW:  Listen to Happier and connect with their website and social media platforms. Please support Eighty Ninety by visiting them online, and playing, downloading, and/or purchasing their music, or attending a live show! And, as always, thank you for supporting real music!

Listen to HAPPIER by EIGHTY NINETY: