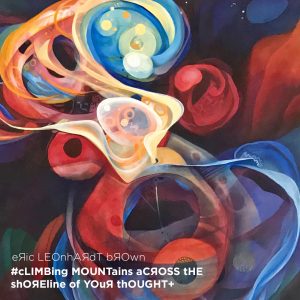 Yellow Springs, Ohio’s Eric Leonhardt Brown is a singer, songwriter, poet, and producer who—with three decades as a musician under his belt—has been creating music for the majority of his life. As a young boy, he would sing with his mom at church, and bury himself in his parents’ record collection, naming Pink Floyd’s Dark Side of the Moon as a “formative” experience. (A good sign for you and me.)

A few years later, in high school, Eric formed his first rock band, Nude Canoe, who would go on to experience much local success, including 3 studio albums. Then, throughout the 90’s, he wrote, recorded, and performed with various acts, and released several volumes of poetry.

As time passed, other projects included: 2005’s Simply Beautiful, and 2016’s Inversion—an epic multi-genre project that arguably set the stage for Brown’s latest release, 2017’s Climbing Mountains Across The Shoreline Of Your Thought, an album which Eric himself describes as, “a conceptual interface about a character, Spooky Gladstone, and his personal struggles to maintain his humanity in an increasingly detached and digitized world.” The mammoth 33-track project is a fine example of the craft of independent music-making, the expression of free thought, and art made without monetary aforethought.

The album opens with a 40-second spoken piece, Itsownreality…

“I feel very frazzled, disconnected and flustered. When I want it, I think, oh my god, everybody in this world is rich and successful and beautiful …accept me! What am I doing with my life? (laugh) It’s its own reality. But I think that’s it. It’s its own reality, and I can’t …I can’t handle it very well.” 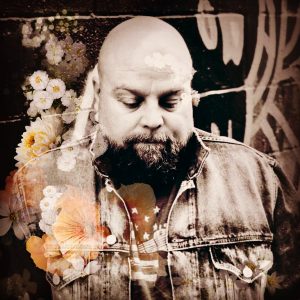 Commentary on our culture’s increasing trend toward an ultra-superficial reality continues on ;pretty)…

The alt-trip-hop number, **catharsis**, could be telling the tale of random thought sequences that occur during a young millennial’s revolution in consciousness. Stick around for the Gorillaz-esque beat that drops at 2:33.

With a techy Leonard Cohen-vibe, #Arcticcircles, creates what feels like a sonic interpretation of the collision that occurs between one’s commercialized concept of death—and one’s intuitive knowing of the immortality of consciousness.

Statements and ideas on consciousness aside, {{gigabytes-Dreaming-in-Futile-Shades-of-Amber}} has a funky, jazzy flow. Plus, the keys riff in the last 10 seconds is super cool.

“I’m not afraid of dying. I think I’m afraid of having to suffer to die.”

Our Favorite Track:
If you can imagine the mixing a Bee Gees track with a Pink Floyd track, the end result might sound a bit like, At-Govt.sat., a funky shot at big-brother with a pleasingly nasty guitar solo that spans the track’s entire second half.

Hey, who doesn’t like a little sarcasm thrown into a grimy rock riff? Check out, #Avatar.

Possibly the most “conventionally” arranged track on the album, ^^whenspookywastrending^^ sounds like a collaboration with Beck and NIN.

The album begins to take a noticeably more hopeful turn on, S.P.O.T., whose rhythm track reminds me of 1995’s Beautiful by the Smashing Pumpkins. The song is a curious, rhythmic composition with an enlightened edge…

“We see at night
A world lit up
By candlelight

A refreshing, minimalist, instrumental, Valhallaallahlav, sounds like something off the Braveheart soundtrack.

Using satirical irony, as well as veteran musicianship and production, Eric Leonhardt Brown’s Climbing Mountains Across The Shoreline Of Your Thought offers strong commentary on society’s ultra-fragmented, neo/tech-based style of communication; which seems to have—at least in part—created an arrested development in how our species learns to not only communicate, but also:  relate to one-another, perceive and express empathy, and interpret and relate to reality in general.

The album, as a whole, is a matrix-like, sonic-dream-sequence, shedding light on a reality where the comically unimportant has somehow become important—and the wildly irrelevant has become paramount. What it boils down to, is that this album is not made only for the sake of the music; there’s more—much more. And, at the end of the day, its meaning will depend not only on who you are, but also how you see your life.

Whose lovechild…?
A spattering of influences, which include elements of Pink Floyd, Gorillaz, Beck, NIN, and more…

BELOW:  Check out our full artist interview with Eric Leonhardt Brown, listen to his album, Climbing Mountains Across The Shoreline Of Your Thought, connect with his website and social media platforms, watch his music video, and find his booking & contact information. Please support Eric Leonhardt Brown by visiting him online, and playing, downloading, and/or purchasing his music. And, as always, thank you for supporting real music!

Check out our full artist interview with Eric Leonhardt Brown:

Listen to Eric Leonhardt Brown’s album, Climbing Mountains Across The Shoreline Of Your Thought: