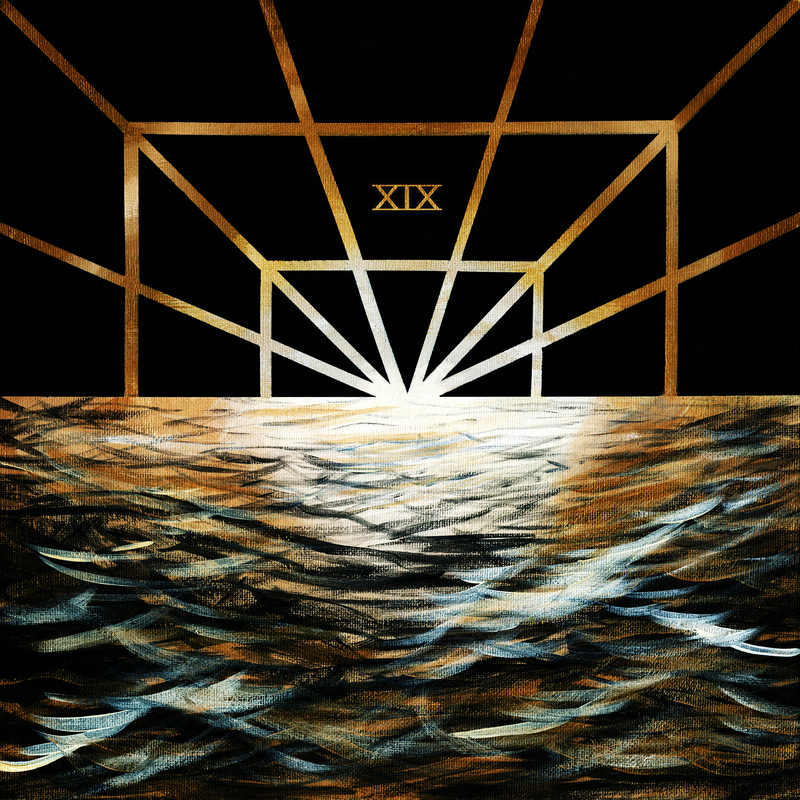 Preceded by 2016’s Palace Law, (a righteous debut all on its own—be sure to check out “Weathered By The Storm”), this latest effort—you just might find—is a rock album of epic proportions; a worthy and superior effort to appease the Rock Gods’ selfish and filthy desires for more…just as it should be.

“Wading down a river of reverb, the current begins to intensify. You’re thrust into THE SKY BENEATH, the anthem to your next high-speed chase through the cosmos behind the wheel of a stolen ’78 Trans Am with the windows rolled down.
Badass.”

I would also like to apply my previous description to Make It Right, but I’ll try to elaborate a bit more. Hard-Funk meets Grunge in what, lyrically, appears to be an artistic and articulate depiction of the perpetual wrestling match that exists between one’s celestial origins—and one’s carnal desires. (Think:  Chili Peppers meets Toadies.) It’s radical, so let us treat you…

“…breaking my back to climb this endless
Pyramid scheme
Some poor bastards way of life is
Making you bleed
Into the pale in which we feed. We
Do it raw
No heat is needed for this feast, just
Play along
I feel my head split from the pressure
Live your life
It’s far too hard to stand and wait
Come on child don’t hesitate, the world is large and the man is wrong
Stand up high
Remember what it takes to tell a lie
For why? A self respecting person sheds its skin

I love it. I see it in myself. It’s greed
I know just where I need to go just to let this be
Make it Right…”

OUR FAVORITE TRACK…
Picking a favorite track on this album is sort of like picking your favorite Dorito out of the bag—I mean, come’on, right? That said, it’s my job, and the powerful contrasts in Pretty Ones do the trick. Jesus, this is a great song. Three songs in, Wiltse’s vocals are clearly for real—and I mean—FOR REAL. Once again, the production on the bass and drums has me nostalgically thinking about old-school Chili Peppers. And, the writing supplies an intriguing bit of rock-prose on our superficial culture…

“…I might not be endowed with brains but I got brawn and that’s alright
Screenplay won’t get you laid, get paid, sit back just get your hands off pride

Lord, I said that the pretty ones won’t survive past one day
Just as I thought I figured out this life
I’m watching all these times pass by…”

The album’s title track, The Sky Beneath, offers a rare instrumental in this age of over-lyricized radio-fluff. While you will have to decide for yourself, we believe the track ultimately serves as the calm before the storm known as:  The second half of the f#*$ing album. (Buckle up.)

The all out rock’n’roll bloodshed & carnage that is, The Hunter, could just as easily be our favorite track on the album, and is instantly reminiscent of early 2000’s Hoobastank.

Be sure and stick around for Slow Stabbin’s straight-raunchy solo at 3:22.

Is It Getting Faster In Here:  Think:  ZZ Top meets Buckcherry. (Yup, you heard me right.)

The funk returns in the album’s closer, Arrestor. The riffs are skillful and show the band’s chemistry and trust in one-another. The dynamics are as magical as anything else on the project. All in all, this track in particular showcases the group’s talent—specifically their ability to dance in—out—and between—any rock sub-genre they choose, effortlessly.

IN CONCLUSION…
Exquisitely performed, recorded and mixed. Artistically written. Conceptually unique. Look, it’s this simple:  at only 6 weeks into the new year, we already have our first legitimate contender for 2019’s Album Of The Year. Honestly, at the least, I can hardly imagine a better rock album being released this year. The feat would take an extraordinary amount of work. Which is to say, Fathom XIX’s second studio album, The Sky Beneath, is indeed an extraordinary rock album. Repeat:  Extraordinary. From drums, to ax, to bass, to oral-timbre, each member exorcises demons in this 42-minute-long display of rock-mastery.

And so it’s worth mentioning that, as music journalists, we at The Ark of Music get flogged by an onslaught of music on a continuous basis—and delightfully so. To such an extent, that we rarely have the time to listen to a body of work for an extended period of time beyond our review process. This album represents a rare exception, and will grace our media-players for weeks to come. Beyond the fact that we’re excited and hopeful for the ramifications to the genre which this album represents, we are, quite simply, grateful for the listening experience. There it is.

BELOW:  Listen to Fathom XIX’s new album, The Sky Beneath, and connect with their website and social media platforms. Please support Fathom XIX by visiting them online, and playing, downloading, and/or purchasing their music, or attending a live show! And, as always, thank you for supporting real music!

Listen to THE SKY BENEATH by FATHOM XIX: