Limerick, Ireland-based artist Fergal Nash has been refining his craft for the majority of his life. Starting on the guitar at the young age of 10, Nash has been expanding and recording his own musical catalog for over two decades. He’s a one-man-show in the studio (which is no easy feat), playing and recording all of the instruments heard on his albums completely by himself.

Nash has released three records to date – Take It Over (2013) and Pieces of Everything (2015). In late 2020 his third studio effort hit the airwaves – Golden Sky is a hopeful, invigorating and positive exploration of future possibilities, wrapped in ear-worm melodies and driving rhythms – it’s a collection of songs that gets toes tapping just as well as it inspires.

Nash tells us that the songs on this record were largely written many years before Golden Sky was released, and the obvious care and attention that went into choosing his strongest works does not go unnoticed. The album opener, Top of the League, is a great example of this. It’s a solid introduction to Nash’s sound – powerful electric guitars, a driving rhythm, and inherent positivity and motivation around every turn. 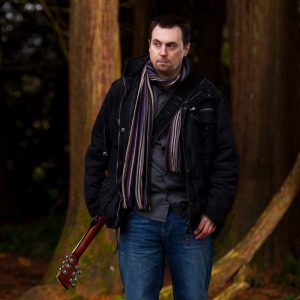 Around The Town has a particularly catchy hook, backed by the inclusion of some keys and punchy guitar riffs to keep things moving – we can see why this was the lead single off this record. On The Front Foot brings a very similar energy and works just as well – the bright acoustic guitar intro and unapologetically major tones are flanked by some particularly insightful lyrics: “There are never guarantees, of champagne everywhere we eat, but chances must be taken to survive”.

The metaphorical meaning in The Scent of Spring works just as well as its literal interpretation. The message of looking forward to better days and the sweeping out of old debris is compelling and empowering, but we can’t help but find ourselves looking forward to winter’s impending end in hopefully just a few more weeks while this one is playing.

While there are several ballads on this record that show off Nash’s artistic range beyond the uptempo numbers, we love Harmless for its soft, swinging feel. “They’re only demons anyway,” the vocals assure us, encouraging us to ignore the naysayers and forge forward. Even on his most subdued tracks, Nash continues to uplift and empower his listeners.

Many of the best stories in music are based on real-world events, and on Golden Sky, this also seems to be the case. They’re Calling For You is a tribute to Nash’s late mother, who passed away in 2018. Simply executed, this song contains little else aside from acoustic guitar and vocals – but this production choice allows the story at hand to be the star of this track. This song presents an insightful and reflective look back on the time Nash spent with his mother, and the emotion that went into this lovely tribute is unquestionably present in every measure.

We’re living in crazy times, and all of us could use as much uplifting energy in our day-to-day as we can get. With its inspirational messages and catchy melodies working right alongside the heartfelt and emotional ballads, Fergal Nash has given us a wonderfully authentic taste of positivity and grace on his latest record. This is a bright and encouraging work that radiates its own glowing beacon of light into these dark days – if that sounds like something you could use right about now, we suggest you give the very aptly named Golden Sky a listen.

BELOW:  Listen to Golden Sky by Fergal Nash and connect with his website and social media platforms. Please support Fergal Nash by visiting him online, and playing, downloading, and/or purchasing his music, or attending a live show! And, as always, thank you for supporting real music!