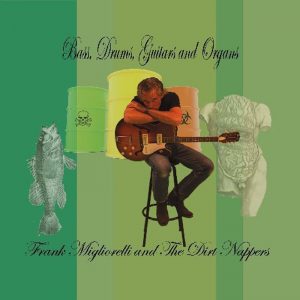 At The Ark of Music we’ve seen a plethora of amazing artist careers. Few, however, can compare to the career of one, Frank Migliorelli. He’s created what has been called a “library of music” for various advertising agencies. His music has appeared on network television, video games, and numerous educational programs for Scholastic and others. And, he is the onetime owner of Rave On Records, who oversaw such acts as New York City blues duo, Satan and Adam.

Having carried that torch for so long, few have so completely earned the “been there, done that” credo, which brings us to now. After years of creating music for others, a few years back, Frank decided it was time to make his own. Wasting no time, Frank Migliorelli & The Dirt Nappers were formed and, drawing deeply from the influences of rock, pop, roots, rockabilly and soul, released their debut effort, City Eastern Serenade in 2015.

“When you’ve done everything from writing music for little kids, ad agencies and half-naked guys in bow-ties, you want to step back and try something different.”

With it’s dreamy, easy-going melody, backing vocal harmonies, and 70’s style guitar licks/tones, When She’s Walking By Your Side immediately reminded me of the great Roy Orbison. The composition as a whole is like a fresh breath of cool, sunny-morning air.

Our Favorite Track:
Even in the midst of deep, make-or-break introspection, I’ve Been On My Knees somehow maintains that glowing Mellencamp-esque optimism that I’ve quickly learned is a calling card of this bunch… 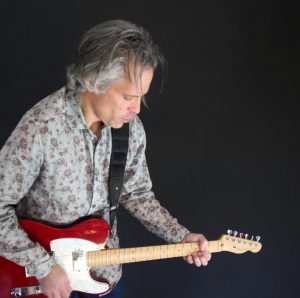 “So I finish out, this cigarette,
Let it steal my last dying breath
I’ve been on my knees…”

It All Falls Down On Me is the third track on the album, and, if you haven’t noticed, it’s also the third song we’re digging. (I’m not sure if this has previously occurred in The Ark of Music’s rich—though relatively brief—history.) What this album’s creators have already shown is how invaluable the decades of experience can be. Razor sharp production, effortless-sounding melodies, and a wonderfully, logical style of mixing are all on the table…three songs in.

Rockin’ In The Moonlight‘s subtle jazzy, cocktail lounge vibe bring to mind, songs like Sinatra’s, I Get A Kick Out Of You. It’s smooth, chill and fun, and how about this:  it’s exactly what the world needs right now. (There, I said it!)

Frank Migliorelli & The Dirt Nappers’ latest album, Bass, Drums, Guitars & Organs, represents a rare instance of near flawless fundamentals. So, allow me a bit of latitude here, because what more can I say, really? You take a group of uncommonly creative players who have—for all intents and purposes—mastered their respective instruments, put them in the studio together—with a quintessential veteran of the biz as your front-man—and the end result is something a bit magical:  a collection of songs which are light in spirit, and go easy like a cool, welcome breeze.

Whose lovechild…?
Hints of Petty and Orbison are everywhere…

Share Frank Migliorelli & The Dirt Nappers with your people: