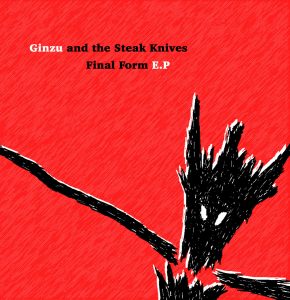 Wanting nothing more than to melt their fan’s faces with heavy riffs and pounding beats, the boys never take things too seriously. In fact, when we asked them what they’re trying to “say” with their music, the response was, “…not trying to say anything at all…”

“Do you like getting your skull caved in by heavy riffs? Do you like these riffs to be stuffed into short catchy songs like a shotgun blast to the face?”

—Ginzu and the Steak Knives

Recently, they released their 5th project as a band, Final Form E.P, a hair-raising, eardrum-pounding, 5-track experience that lasts just under nine minutes.

Crow Hand hits the ground with thick, frantic riffs; then breaks and rebuilds the tension at the 00:38 mark. One minute and fifty-three seconds later, you’re left wondering what the hell just happened.

Our Favorite Track:
The first half of Malamute hauls ass in a very 80’s/90’s hairband style, then transforms and concludes in angsty, metal fashion.

The 42-second Street Fighter 2 is more like a single thought put into actuality via punk-metal. This is millennial art, people. No rules.

The wondering mini-epic Bones has overtones of Metallica’s St. Anger.

Whether wailing about a shark attack or some other random sea monster, the album’s final track, King of the Sea, sees the Ginzu boys at their most creative. Razor sharp tempo changes abound in Final Form’s longest track of 2:45. 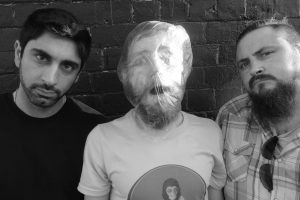 While experiencing Final Form E.P, at first, I got the feeling that the Ginzu boys include lyrics for their fan’s sake—you know, to make them happy because your “supposed” to have lyrics—but would rather ignore their mics and just thrash on each of their respective weapons of choice for the duration every song—every show. But then, I realized that’s not true at all. They’re just inspired by simple things:  stories, video games, toys, cartoons, girls, the desire to have fun musically kicking people’s asses—and god knows what else. I’ve said it before, and I’ll say it again here:  Sometimes music is best when it’s not complicated. Most of the time, I don’t want to feel like I have to “figure out” what the hell a song is about (a 90’s grunge phenomenon that drove me nuts).

That said, don’t get it twisted, there was no cheating or skimping on the production and mixing, which are as good as it gets. All in all, I’d say Ginzu’s goal of creating “Short, loud, catchy songs. Punk, metal, and doom riffs that will smash your face, and beats that will melt your brain” has been a wildly successful endeavor. With all but one song being under two minutes long, it is the perfect album for the modern-day, millennial attention-span. If you’re into new-punk, you’ll absolutely love this record.

Listen to Final Form E.P, by Ginzu and the Steak Knives:

Share Ginzu and the Steak Knives with your people: