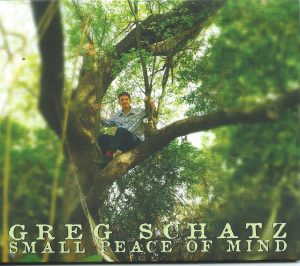 With a sound and style simultaneously informed by the likes of Jelly Roll Morton and The Kinks, to no surprise, his live show schedule is as packed as his album anthology—the result of a lifelong affair with the mistress of music. New Orleans-based (by way of upstate New York) singer/songwriter, multi-instrumentalist (piano, accordion, upright bass) and composer, Greg Schatz, began performing his original music as a teenager.

A few years, and six full-length albums later, his anthology includes the solo projects: Where the River Meets the Railroad Tracks (2012), and Everything That You Wanted (2015). Schatz’s latest release, Small Peace of Mind, is his third as a solo artist, and represents a sort of evolution or break-away from his usual songwriting process, as the piano—rather than the accordion—has now become his central instrument.

And, with a wildly talented core of players (aptly named, The Friggin’ Geniuses) consisting of Doug Garrison and Paul Santopadre (drums), Alex McMurray and Dave James (guitars), and Dave Stover (bass), what you have is inevitably entertaining.

Opening with, Fire In My Heart, the influence of The Kinks falls in your lap. With keys, organ, grimy guitars, and do-whop-style background vocals, this smokey piece of nightclub rock feels like something that belongs on the Pulp Fiction soundtrack. 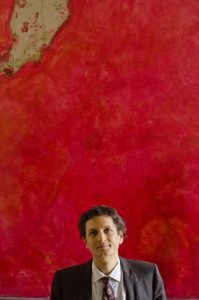 The Devil That You Know has an early-era Dylan-esque sound with a twist of country-twang. The composition is lively and full of texture.

“How it got this way, no one knows
Everybody wants to meet, but they just can’t go
Days are dark, the sun it shines at night
Right is wrong, and wrong is right
Welcome to crazy town…”

The smooth, though still plenty lively, Roll Like A River, again brings to mind the likes of Dylan particularly in the writing…

“Now I’m much older, guess I should be wiser too
Still trying to figure out what I did with all that time
Still so much to do before I die
Don’t wanna let the world just pass me by

The jazz-bluesy, Falling To Pieces Again, offers a surprise instrumental break which is on par with each of its vocalized predecessors. BE SURE to hang-out long enough to hear perhaps the sickest fiddle solo I’ve ever heard. At around the 3:30 mark you can toss out your electric guitars boys…I said damn son!

“I know a guy with an old pickup truck
It doesn’t run so well, but he don’t give a… …darn”

—Greg Schatz, Drive It Till The Wheels Come Off

In Conclusion…
Cleverly humorous, accessible lyrics unite with a host of instrumental breaks and showmanship in order to create an entertaining 12-track collection in Greg Schatz’s third solo album, Small Peace Of Mind. With the vocal candor of Dylan, and the rustic musicianship of The Kinks, these songs are—at the very least—entertaining; and at the very best, something about which one could become fanatic.

BELOW:  Listen to Greg Schatz’s album, Small Peace of Mind, and connect with his website and social media platforms. Please support Greg Schatz by visiting him online, and playing, downloading, and/or purchasing his music. And, as always, thank you for supporting real music!