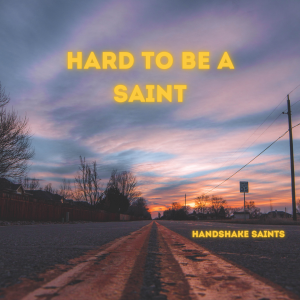 The Handshake Saints – a rock band out of Northwest Arkansas – have aptly defined their style as a “decidedly modern twist on a vintage sound“. This concise descriptor couldn’t be more accurate, as the group’s bright take on a familiar classic rock tone is all over their debut single, Hard to Be a Saint.

The group formed in 2019, and consists of Aaron Mullins (piano), Roger Norman (drums), Phil Cristofaro (bass), and Josh Masten (guitar). Their influences are broad, ranging from Otis Redding to The Beatles to Tom Petty, but the resulting sound from this group is uniquely their own. Hard to Be a Saint is most prominently defined by a funky, bouncing bass rhythm, a distinctly 70’s guitar tone, the light but ever-driving percussion, and an impressive vocal performance that has a distinctly retro cadence. The track most certainly leans into the “vintage sound” that the band embraces, but the well-balanced production does bring a modern element into the song.

The lyrics here are akin to so many of the great tracks of days gone by – straightforward phrasing, driving all of the listener’s attention to the refrain. However, the story is unique. The hook sums up the entire message into one simple line – “It’s hard to be a saint with all those sinners running free.” That said, the simplicity in the lyrics allows the cohesion of the band to be the star of this track – clearly, these are performers who are used to playing off each other, and their chemistry comes through loud and clear in this composition. 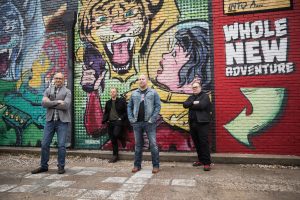 The polished sound of Handshake Saints on their debut single makes it hard to believe that this is just their first release as a group. With their strong and familiar melodies, their individual performing abilities, and the insightful songwriting skills, Hard to Be a Saint is an excellent combination of musical nostalgia and a sharp new original sound. With an EP slotted for release in early 2021, we look forward to hearing more compelling music from this talented foursome.

BELOW:  Listen to Hard to Be a Saint, and connect with their website and social media platforms. Please support Handshake Saints by visiting them online, and playing, downloading, and/or purchasing their music, or attending a live show! And, as always, thank you for supporting real music!

Listen to HARD TO BE A SAINT by HANDSHAKE SAINTS: