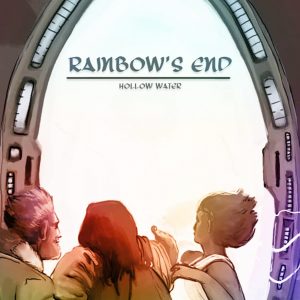 At the very core of the Aberystwyth, Wales based progressive rock outfit known as Hollow Water is the duo of:  Alan Cookson (keyboards), and Huw Roberts (guitar). The two have been making music together since 2012. According to Alan, the band’s unique name was inspired by the awesome and unpredictable power contained within the natural world’s hollow water occurrences of whirlpools, water spouts, cylinder waves and others.

In true indie-art fashion, Rainbow’s End is a concept album with a sci-fi theme, which even includes an eight page comic book (drawn by Aidan Kelly), the story-line of which introduces three acquaintances who form a team in search of a legendary everlasting rainbow which never fades.

This concept album’s intention becomes abundantly clear as the journey launches with Day In Day Out, and Mirror’s Frame, two tracks with a light, hopeful spirit about them. This pair of adventurous compositions—which are interlaced throughout with performance-art skits—grab a listener’s attention with tempo changes, ripping guitar solos, and jazzy sax work.

Our Favorite Track:
Rainbow’s Begin sets off with waves of soaring synth as a strong grounding rhythm builds beneath. The soundscape is very compelling, and the track as a whole is a testament to progressive-rock’s future as a genre.

The Quantum Mechanic and the Map Collector’s opening is immediately reminiscent of 70’s alt/synth rock groups such as Rush and Styx. Just when you might think you’ve got a handle on Hollow Water’s sound, this track shows you otherwise, as it flawlessly alternates between etheric synth and scale-climbing electric guitar solos. And don’t forget the lyrical quest of our 3 travelers… 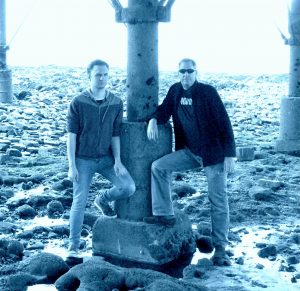 Rainbow’s End and Trick of the Light combine for almost 15 minutes of epic, sonic tale-telling! In particular, the latter impresses with beautifully constructed Pink Floyd-esque guitar solos. Cookson and Robert’s ability to piece together SO MUCH in these tracks speaks to their vision and persistence, as well as their ability to get the best from their collaborators.

Immortal Portal surprised me. I heard the echos of pioneer electro-rockers Filter and Nine Inch Nails influencing the hell out of this cut, drenched with saw-tooth synth, and long, crying, electric guitar bends. The song signals our 3 travelers’ discovery of a time portal that just might be able to take them to a place where rainbows do indeed last forever…

“Illusion of the light.
No change of time, no means of flight,
We can leave this earth behind,
Out of sight and out of mind”

In regards to We Changed. This World Didn’t, the final track, I only want to make one simple request of you…check out the nearly 2 & 1/2 minute guitar solo that occurs between 1:26—3:44. This, people, is how you complete a record. And, while our three journeying heroes may not have found exactly what they were looking for, I suspect they were not disappointed…

“We came back to earth, what did we find?
Nothing had changed, was it just in our minds?
It was still raining, but every colour was there
We were like heroes there, for a few nights and days
But we are different, we have all changed
Now our whole purpose has become exchanged
Seek out other dimensions, we know are all out there
Find keys in every corner of this world and theirs”

From an artist’s perspective, Rainbow’s End represents an impressive mountain of raw creativity. The amount of intense focus required in order to write each piece, acquire the musicians and organize their respective role(s), as well as visualizing and actualizing the artwork, is no small feat by any artist’s measure.

From a fan’s perspective, the plethora of rich musical colors and textures, and the intriguing, thematic journey running throughout, provides an experience that is—at the very least—entertaining as hell, and—at the very most—might just be brilliant.

I salute Hollow Water’s effort to create something so incredibly unique, particularly during a period of time when the “popular” choices are anything but. Ultimately, taking the trip through The Rainbow’s End is an inspiring experience, and very much worth your time.

Whose lovechild…?
A gentle mixture of 70’s style synth/alt-rock, including hints of Pink Floyd, Rush, and Styx.

Below, you can listen to Hollow Water’s album, Rainbow’s End, and connect with their website, social media, and streaming/download platforms. Please support Hollow Water by visiting them online, and playing, downloading, and/or purchasing their music. And, as always, thank you for supporting real music!