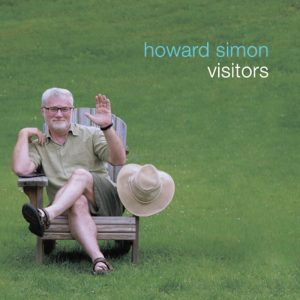 His goal is lofty, though worthy. His intentions are rare, though honorable. You see, Howard Simon isn’t just making handsome noise with that guitar of his. He wants to touch your life. He wants to reach that soft, warm spot somewhere underneath your sternum. And, in an age encumbered by meaningless, one dimensional pop drivel, Howard makes music with the hope that you’ll really feel something.

With classic folk influences like Bob Dylan, Paul Simon, and John Martyn, the San Francisco-based (by way of Cleveland) Simon has put in work across the country from Chicago to Santa Fe, Los Angeles to Sacramento, and more. Though playing and writing music as a teenager in the ’70’s, his eventual duties as a father and a husband put a pause on music for some twenty years. Returning to his guitar craft in 2004 set off a cascade of events that would eventually lead to meeting his producer in 2012, and his debut album, The View From This Horizon in 2014.

His latest release, Visitors, was something Simon says he wanted to make for fun, and to show that this late-bloomer has plenty more left in the tank.

In The Devil Every Day, Simon temporarily puts down his acoustic guitar in favor of an electric ax, and makes it work. The track has a cool, smooth 70’s vibe reminiscent of The Doors and Blue Oyster Cult.

“It ain’t retro if you never stopped doing it.”

Where You Are, a song Howard wrote in his 20’s, shows that this artist’s brilliance for the tender has long been with him. The piece takes its time, expanding slowly with vocal harmonies, and a lovely piano solo at around 3:06.

Our Favorite Track:
Normal Life is a tastefully simple, smokey jazz number, complete with that quintessential organ and muted trumpet.

“I want people to write their own stories over mine; to find in my songs a memory or an aspiration in the listener’s own life…” 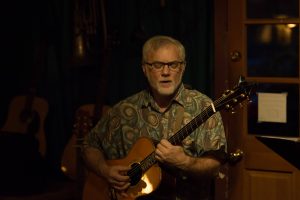 A Simon & Garfunkel-esque influence rings gently in, Sweet Words And History, through not only its intricate guitar work, but perhaps more-so through its writing…

Using the legend of delta blues master, Robert Johnson, to weave together a tale of love and forgiveness in the album’s final track, Three Horses, Howard Simon’s storytelling and finger-picking simultaneously find themselves at an apex…

The depth of Simon’s writing, as well as his skilled finger-style and flat-picking, are both uncommon and commendable. Ultimately, it is this combination which makes his sophomore effort, Visitors, a lovely and warm compilation of tales that sound and feel dreamy and fictitious—and at the same time—historically relevant.

Whose lovechild…?
A gentle mix of Great Lake Swimmers and Paul Simon…

BELOW, you can listen to Howard Simon’s album, Visitors, and connect with his website and social media platforms. Please support Howard Simon by visiting him online, and playing, downloading, and/or purchasing his music. And, as always, thank you for supporting real music!