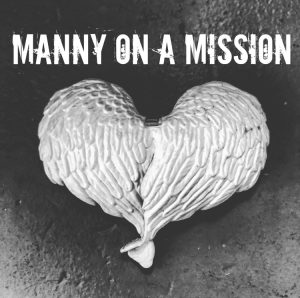 Q: Great to be talking with you Kyle! Your roots are in Mississauga, ON, and you’ve performed all over the Toronto area. How has being so close to one of Canada’s most musically rich cities influenced your music?

A: I think that most of my musical influences actually didn’t come from the Toronto area but closer to where I actually grew up which is the Mississauga/Streetsville area. My best friend’s brother had a band growing up and they would always let us tag along to watch practice and shows and I think watching them made me want to be in a band. Also, I got to watch so many bands that have become huge names in Canadian music start out playing little venues. It was a privilege to be so close to Alexisonfire performing that they were actually spitting on me.

Q: Manny on a Mission was started in 2005, and you alone have managed all of the instrumentation, vocals, and recording. Do you prefer the creative control that comes with working alone or might you look to involve others in this project down the road?

A: I mean when it comes to live performances I have always involved my friends and let them be involved with the creative process. But it will always be my baby. The thing when I started out I was playing in other bands with my friends and Manny on a Mission was just kind of my creative project I could work on at home when I was bored. But the other bands always kind of broke up or didn’t work out and I just kept going with Manny on a Mission that it eventually just became my number 1 priority.

Q: While the recordings are all completely self-directed, you do have other musicians who accompany you during live shows. Does this influence the feel of your music when you perform?

A: I think most of the songs at their root are the same but there have been little things here and there that the other guys in the band would add or suggest that have leaked into the performance or later the recording. For the most part I’ll admit I can be possessive of my music but I do try to be flexible to other people’s ideas. 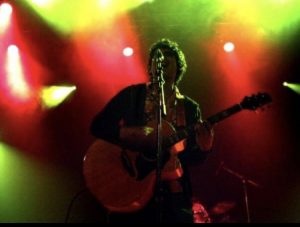 Q: This most recent release, the self-titled album “Manny on a Mission” is composed of re-worked versions of older songs you’ve previously recorded. How did you decide on which songs to include?

A: Part of it was taking songs that I have written that we’re lesser know and giving them new life. I wanted those songs to be heard. Another part of it was listening to the old songs and maybe having second thoughts on some of the stuff I did. Maybe thinking something that was electric would have sounded better acoustic. Different things like that.

Q: How long did “Manny on a Mission” take to record?

A: To be honest not that long. When you already have the lyrics written and the blueprint for the songs already in place, the rest comes naturally. Not having to write new lyrics saves a lot of time. I think that’s a part of the writing process that I take a lot of time doing because I really want every word to count.

A: Well my first instrument was a bass guitar which I don’t personally have anymore but I know that it resides in my friend’s basement. He might still use it I think. But my first six-string guitar I actually gave to my girlfriend as a gift when we were 20 and we ended up getting married so even though it’s technically hers now I guess it is hanging on my wall in my basement.

A: While I certainly don’t expect that to happen if by some miracle I could get to a point where making music brings in enough money that I could live comfortably that would be a dream come true.

A: Ahhh. Dashboard Confessional – The places you have come to fear the most. That doesn’t mean I think it’s the best of all time. Just my favourite.

Q: Your favorite song of all time? (Again, only one)

A: I hate pants and I look really good with a moustache.

A: Ok I think I should take this opportunity to just name a bunch of people whether big or small had a part in making this band exist for 15 years. Some of these people I haven’t spoken to in years but I want them to know I haven’t forgotten them… Lindsay H or M…one or the other…that’s my wife. Peter W, Sarah P(W) Steve D, Richard T, Megan and Graham D, Greg P, Kim C, Caitlin K, Ryan S, Bren S, Jen G, Lindsay V(I), Keith K, Danielle D, April B, Matthew S, Keri P, Sam J, Courtney A(RIP), Alex W, Melissa M, Peter D, Dave T, Kaitlyn S, Sarah M, Rachel M, Clint M(RIP), Josh H, Matthew H, My parents, my brothers (Mike, Allan, Casey…there might be more but those are the only ones I know about), my entire extended family who have come to see me play countless times… And I’m sure I have forgotten tones of people and If I have I am sorry and thank you to all these people. Oh and I’ll thank Molly who is fictitious but definitely helped me.

<< Go to our full music review of:  Manny on a Mission