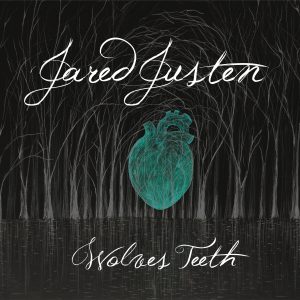 Justen is based in Minneapolis, MN, and has been playing guitar for over a decade and writing songs for nearly as long. An introvert by nature, his personality often influences his music, alongside his desire to maintain a focus on simple, guitar-driven acoustic stylings. On Wolves Teeth, it seems that he has definitively achieved that goal.

The album is defined by a few key elements – simple, reverberant acoustic guitar picking, poetic lyrics, and Justen’s particularly unique, breathy, evocative voice. The album opens with All That You Are, starting out mellow and as simplistic as can be, while building into a more driving and fervent guitar rhythm. While much of the project has a melancholy timbre, Vanquish All brings it particularly to the forefront, as does the somber It’ll Be Alright. My Insight showcases a brighter tone from Justen’s guitar, breaking up some of the darker tones nicely.

In fact, the intricacy of Justen’s fingerpicking is one of the high points of the record. He’s clearly a skilled guitar player as demonstrated on tracks like Alone Out Here and Prove The Only, but it’s also clear that he knows how to demonstrate restraint in his playing. Not every track has busy instrumental lines, despite how easy it would have been to write them that way in order to fill the space. Instead, Justen embraces the silences and spaces between the notes, and he makes them a part of his work.

The closing & title track Wolves Teeth ventures a bit more into multi-instrument territory, and it’s a nice complement to much of the preceding simplicity. The very light production – just a bit of percussion, bass, and keys – combined with the effect of the whistling wind paints quite a dramatic picture. You can practically feel the iciness that this track strives to create.

Refreshingly simple and poetically executed – for modern underground indie-folk fans, there’s plenty to enjoy on Wolves Teeth. It’s no question that Jared Justen is a skilled guitar player and songwriter, and this album is a great testament to his skills on both fronts. It has us looking forward to more straightforward, evocative acoustic music in future releases.

BELOW:  Listen to Wolves Teeth and connect with his website and social media platforms. Please support Jared Justen by visiting him online, and playing, downloading, and/or purchasing his music, or attending a live show! And, as always, thank you for supporting real music!