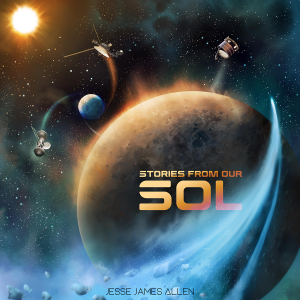 We were absolutely star-struck by Jesse James Allen‘s 2021 release Cassini: A Musical Tribute. And we weren’t the only ones – this album went on to win the Vega Award for Best Original Music as well as two LIT talent awards for Best Synthesizer Performance and Best Sound.

Now we’re being treated to what Allen has called the musical precursor to his previous album. Stories From Our Sol is, as described by the composer, “a theater of the mind space odyssey, based on 10 historic missions from NASA, ESA, and the Soviet Union.” While succinct, this description but scratches the surface of the moving, deeply artistic, and illustrative music that is found throughout this album and all of Allen’s work.

If you haven’t already, we strongly recommend taking a listen to the previous album and then listening through Allen’s explanation of how these two works are thematically related. It gives an extraordinary amount of insight and depth to the project, as well as some wildly impressive clarity into the workings of the mind of this remarkably talented composer.

“While these early explorers were not human, they were built with human hands, programmed by human minds, and were operated by extraordinary teams from many nations who shared the essence of all great explorers. These are the “Stories from our Sol”, a tribute to mankind’s first steps to the stars.” – Jesse James Allen, Stories From Our Sol

The opening prelude sets the tone for the entire work, a light and otherworldly arrangement moving softly under helpful narration. Then we dive headfirst into guided space exploration. Luna 3 is as dramatic as it is cinematic, capturing the essence of a lunar mission that’s hardly publicized but no less fascinating than the likes of Apollo 11. Mariner 10 is a touch melancholy, perhaps with a bit of longing, a reflection of the isolation of both the solo probe the track is titled for, as well as the isolation of the planet it visited, Mercury. Within these first two tracks alone, it is abundantly clear that every element Allen includes in his work serves to further the story, to paint the picture a touch clearer. Considerable skill and foresight in the quantity it takes to do such a thing are rare, but we find it in droves on this album.

Viking 1 is a standout for its slight shift into a more classic rock direction, pulling on elements of music that were popular in the ’70s when the mission discussed was executed. It has an anthemic feel blended with more modern electronic elements that underscore the excitement and – at the time, newness – of obtaining the first-ever photographs of the surface of Mars. The absolute tapestry of synths moving within this instrumentation give it intense depth and creates serious intrigue.

We also love Voyager II for its highlight of Neptune, a planet often overlooked when pop culture and outer space collide, and Dawn for drawing attention to a dwarf planet, Ceres, that few realize exists with an electric yet mystifying arrangement.

There is an unending supply of astonishingly purposeful and pensive musicianship and composition across this album. But after listening through Allen’s explanation of themes and the connection to his previous work, combined with the incredible arrangement present on the pieces themselves, both Pioneer 10 and Galileo are the standout tracks on this album. Here he reprises musical themes from his previous release, and modifies them to further tell the stories of the specific space missions at hand this time around – it’s beyond intense, beyond moving, beyond powerful. The build-up to the moment signifying the drop of the probe into Jupiter’s atmosphere in Galileo creates the quintessential feeling of uncertainty and chaos before a melodic reprieve of hope and discovery. It’s truly the perfect musical vessel for such an event. This track an entire sci-fi movie in six minutes of sound and an outstanding melding of art and science at the highest level.

The work of Jesse James Allen is nothing short of awe-inspiring brilliance. The expert narration, the nuanced instrumentation, the near-perfect production; this is deeply thoughtful, conceptual, evocative music that is as truly unique as it is awe-inspiring. For those with even the slightest curiosity about the happenings beyond our atmosphere, let Allen bring the world of space exploration to life for you on Stories From Our Sol.

BELOW:  Listen to Stories From Our Sol and connect with his website and social media platforms. Please support Jesse James Allen by visiting him online, and playing, downloading, and/or purchasing his music, or attending a live show! And, as always, thank you for supporting real music!

Listen to STORIES FROM OUR SOL by JESSE JAMES ALLEN: