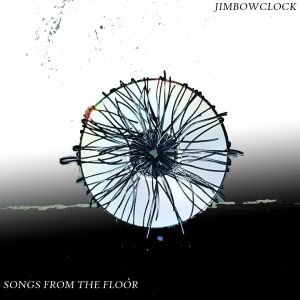 Amherst, VA native Evan Quarles has been knee-deep in artistic expression since he was a young child. Now a student at The Savannah College of Art & Design, Quarles threw out his TV in order to spend more time writing, and he is releasing what he’s written under the artist name (and childhood nickname) Jimbowclock. His new album is titled Songs From the Floor, and it is an eclectic and insightful look into the trials and tribulations of this songwriter.

Tired of the lack of discipline and drive from other musicians his age, Quarles has become a true one-man-band. He writes, records, produces, mixes, and masters his own work. He even designed his own cover art. The result is music that is very tightly tied to its creator. Songs From the Floor depicts the struggles he and those around him have faced – as Quarles put it, “It’s an album for people who can’t get themselves off the floor right now.”

“Everybody has limitlessness musically now. You can do whatever you want. I wanted to strip that away, anything I wanted to do, I had to use my body, my bones, my blood. I am a walking limitation. So my music is limited, but it’s me.”  – Jimbowclock 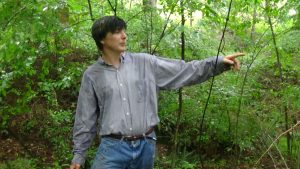 Hi is an ethereal, bluesy track fraught with emotion. Quarles sings of a friendship that’s ended and seems beyond repair. The recurring guitar riff is catchy, and the addition of the harmonica and the layered vocal harmonies towards the end increases the intensity and helps drive the feelings of disappointment and longing home.

The double vocal in Am I The One is precisely on trend with what’s popular in the alt-indie-folk space right now. The chorus melody is catchy and leans just a bit more in the direction of pop than some of the other tracks – though it’s truly hard to define a genre for this record as a whole, as Jimbowclock has pulled from blues, rock, alternative, folk, and maybe even other styles. But this is far from a bad thing – his many influences have created something very unique.

Spider’s Web draws an interesting metaphorical comparison between a relationship and a spider’s web – the relationship was something two lovers were trapped inside and broke free of, only to be unable to ever return. Quarles laments this, singing:

“I wish we could go back to when we were happening
I would tell you everything we could change
But would it really change?
Now I’m all alone and it feels so strange.”

A familiar sentiment for some. but phrased in such a way that we can all relate. This is the mark of a good songwriter.

The first half of The Bathroom Window is more similar to spoken word poetry set to music than a song, but the story that is told is beautifully illustrated. The song speaks of a woman who knows love and abuse as the same entity, and her jealousy of those who have what she is desperately seeking. In the most striking line, Quarles says:

“She got herself a cat for Christmas.
The company of a lover she knew she missed this.
But a black eye and broken septum she did not.
Can you have one without the other she thought.”

The lyrics are fairly concise, but the story is delivered in full – a challenging feat for even tenured songwriters. Quarles has painted a vivid, crystal clear image in a few short lines. We can feel this woman’s pain as we listen along.

Lyrics that inspire and draw you in. Bluesy tones full of emotion and authenticity. Jimbowclock has a unique style that will have you trying to pin him to a genre and failing, but his inability to fit into a standard mold does not take away from what he’s created – in fact, it adds to it. Songs From the Floor is full of great lyrics, genuine feeling, and a vivid image of the people and stories that surrounded Jimbowclock during its inception, in a way that is definitively his own. Check out Songs From the Floor below:

BELOW:  Listen to his album Songs From the Floor and connect with his website and social media platforms. Please support Jimbowclock by visiting him online, and playing, downloading, and/or purchasing his music, or attending a live show! And, as always, thank you for supporting real music!

Listen to SONGS FROM THE FLOOR by JIMBOWCLOCK: