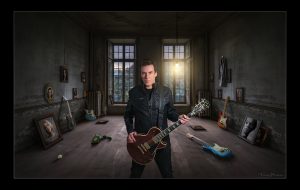 Northern Ireland guitarist Joe Hodgson knows a thing or two about painting pictures with sound. Growing up in a rural part of Ireland, music quickly became his escape from the bleak political and social unrest of the day, becoming a major influence on him and his future career. Hodgson moved to London and has spent the last several decade performing in studios and bands, writing, touring, and recording, before returning home to work on his solo career. In 2020 he previously released two singles, The One That Got Away and Bareback Blues, both of which were well received. Hodgson is capitalizing on his momentum with the release of his full-length album Apparitions.

Hodgson says of the album, “I’ve tried to create something visceral and accessible that communicates not just with guitar aficionados, but also with the everyday person on the street.” It seems as though he’s achieved his goal, as Apparitions is a evocative, dynamic, and expressive work that needs no lyrics to resonate with the soul.

Hodgson truly uses his guitar like a voice across the wide majority of Apparitions. From the fun and funky intro track of Cantata 147 / Fly Your Flag to the driving rock rhythms of Disruptor, Hodgson’s guitar narrates the stories and feelings so vividly on display. With such a high level of playing, you won’t find yourself missing the lyric component on these tracks. These instrumentals stand proudly and impressively on their own.

Another highlight is the artistic range on this album, covering such a wide variety of styles that ensures there’s something for everyone here. For example, The One That Got Away sports a delicate, clean intro that blooms into a more urgent and energetic piece as it progresses, but you also have the high-speed, expertly intricate, high-octane number 10 Feet From Chaos. Portrait of Portia Jayne has some prog-alt-rock sensibilities, and Til the Last Breath is a light handed, melancholy showing of restraint and vulnerability. While it still feels definitively like a rock album at its core, the exploration and inclusion of many other genres both broadens the project’s appeal and speaks to Hodgson’s abilities.

Both The Player and Redneck And The Snowflake are also stand out tracks on the album, the former for its punchy melodic lines and hints of surf-rock energy, and the latter its twangy country tones and foot-stomping beat. And with 15 tracks in total, there is plenty of virtuosity to unpack and enjoy across the record.

Losing You Again is an excellent closer for this album. A little jazzy, a little sultry, a touch bluesy and a whole lot of soulfulness – the guitar’s “voice” is remarkably strong in this track. With the additions of some delicate strings and some expertly placed intricate guitar riffs, this track has a somber but not dejected energy – an easygoing, heartfelt, perhaps slightly solemn look back on past memories.

Texturally brilliant and ever-evolving, an ardent display of a lifelong culmination of skill. Apparitions is brilliant instrumental work from Joe Hodgson. For fans of powerful, rock-tinged music that creates complex imagery with sound alone, and seamlessly blends in a multitude of genres into one cohesive, flowing composition, Apparitions is well worth the listen.

BELOW:  Listen to Apparitions and connect with his website and social media platforms. Please support Joe Hodgson by visiting him online, and playing, downloading, and/or purchasing his music, or attending a live show! And, as always, thank you for supporting real music!

Listen to APPARITIONS by JOE HODGSON: