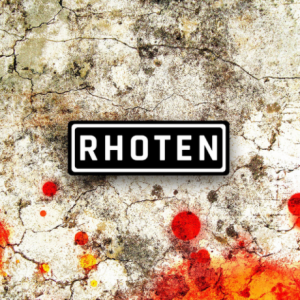 Rock artist Jon Rhoten has been refining his craft since the age of 15, heavily influenced by both indie alternative music as well as British Rock. His sound combines these elements, resulting in something that lies between Brit-rock and alt-punk, a wholly unique but equally as successful pairing of genres. He’s just released his first album, titled Rhoten, and this 4 track project was written, performed, produced, mixed, and mastered all by Rhoten himself at his own studio. Rhoten tells us his goal with this project was to create something he thinks his fans would genuinely like, and we think he’s absolutely succeeded in doing so.

Opening with Undone, all of the genres that have affected Rhoten’s writing and production styles are quite quickly visible. It’s as if some of the heavier material from The Beatles’ catalog were to meet Green Day. There’s an undeniable alt-rock edge, but it’s smoothed out a bit by the dreamy backing vocals and keys. This track in particular has a great driving energy, a bit of military march beat, and a complex chord progression that keeps you listening closely all the way through.

Sing My Song is based in acoustic guitar, and does a great job of showcasing the raw, gritty nature of Rhoten’s vocals. They’re a very listenable mix of raspy and soulful, and they give this track (and the album as a whole) a good dose of authenticity. The message in this particular song – perseverance through challenges, tied closely to a personal story of Rhoten’s first performance – is both wholesome and relatable.

We lean further into the rock angle with Pathetic, with its crunchy electric guitars, punchy bass, and cutting lyrics. The hook is particularly catchy in this track – we think you’ll find “so you think I’m so pathetic, it’s just you” stuck in your head long after this song has finished playing. The electric guitar solo in the second half of this track is another great touch, a display of distorted, technical skill.

The album closes with The Space That Binds, which Rhoten tells us is a tribute to his psychedelic use days. So the spacey, dream-like nature of this track should come as no surprise. It’s an intoxicating blend of guitars, keys, and a softer vocal tone from Rhoten, giving this track intense 70s vibes across the board. It’s an experimental and bold listening experience that has a cinematic arc to it, and it makes for a great conclusion to this album.

Overall, Rhoten is an incredibly enjoyable listen and a clear showing of talent. Knowing that this entire album was born out of the skills of just one individual is impressive on its own, but the fact that each component is still so well-executed makes it doubly so. It seems that Jon Rhoten has a knack for any element he puts his mind to in the music world, because everything from the songwriting to the production to the performances on this album works wonderfully together. For a debut album, you couldn’t ask for more, and this has us looking forward to hearing more releases featuring Rhoten’s unique blend of styles down the road.

BELOW:  Listen to Rhoten and connect with his website and social media platforms. Please support Jon Rhoten by visiting him online, and playing, downloading, and/or purchasing his music, or attending a live show! And, as always, thank you for supporting real music!

Listen to RHOTEN by JON RHOTEN: