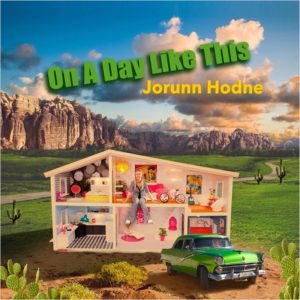 The town of Stavanger, Norway’s very own Jorunn Hodne grew up surrounded by music, though not in a conventional sense. The former journalist was raised in a home where both parents were part-time musicians:  her father a lead-singer in a prison band, and her mother a funeral singer.

Perhaps it was her parents’ rather sobering musical settings which lead to the creation of Jorunn’s fun, free-spirited artistry. Singing since she could walk, performing professionally for the past fifteen years, and writing and producing her own songs for the past ten, her library of work includes 2010’s Trespassing, and 2012’s Move On.

Regarding her latest album, On A Day Like This, Jorunn says, “I attacked this project with playfulness and got a group of disgustingly talented musicians who were ready and willing to make this crazy thing happen. We recorded 12 songs in six hours. Give that a thought; it’s ridiculous. But magic happened, and you can hear from the recordings that we had great fun in the studio.”

“I attacked this project with playfulness and got a group of disgustingly talented musicians who were ready and willing to make this crazy thing happen. We recorded 12 songs in six hours. Give that a thought; it’s ridiculous.”

—Jorunn Hodne on recording her album, On A Day Like This 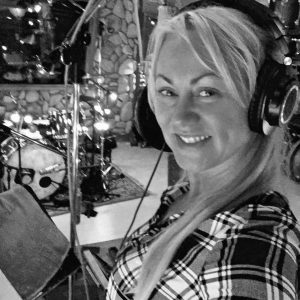 The album’s lead off and title track, On A Day Like This, sets the tone with crystal-clear production, textbook composition, and Jorunn’s rather Shania-esque vocal prowess, which all combine to create a rather infectious celebration of life, if for no other reason than the fact that we’ve made it this far…

Our Favorite Track:
A track which could easily crossover into the pop-rock genre, I Wanna Sing Along, has a classic nostalgic feel. Keys and harmonica add a sonic spice, and Jorunn’s vocals are, once again, fundamentally solid. (She makes singing sound easy.) And, at only 2:50, the track sticks around just long enough to make you want to hit repeat.

The cathartic country ballad, Come With Me, offers the redemption of real love, as well as a lovely and harmonious vocal effort.

With just the right touch of digital delay, When I Say Nothing‘s electric guitar hook is delicious, and sends the song off into an ambient place that the word “Country” just can’t quite contain. Also: Do I need to brag about Hodne’s vocals again? Because…I will.

Dedicated to a dream and a town, Nashville, is splendidly written, and delivers the dream with class…

“I wanna live in the moment from now on
If you don’t take a chance right now, the moment is gone…”

Jorunn Hodne’s, On A Day Like This, is a 10-track showcase of one legitimate singer/songwriter talent. Her timbre, while being both clear and attractive, also feels effortless and relaxed; and it is that very chilled vibe which has inevitably carried-over and created her audience. As far as her band of “disgustingly talented musicians” goes…I don’t know that I could have described them any better. Each song comes-off as finely polished as anything else playing today. And, considering the entire album was recorded in a mere 6 hours, in the end analysis, it seems Hodne was spot-on.

Whose lovechild…?
Shania Twain with a dash of Kelly Clarkson…

BELOW, you can listen to music from Jorunn Hodne’s album, On A Day Like This, and connect with her website and social media platforms. Please support Jorunn Hodne by visiting her online, and playing, downloading, and/or purchasing her music. And, as always, thank you for supporting real music!

Listen to music from Jorunn Hodne’s album, On A Day Like This: