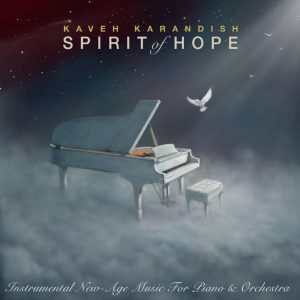 In the world of composer Kaveh Karandish, the reach and effect of music know no earthly bounds. Born in Shiraz, the Persian city of poetry and music, Karandish immigrated to California when he was just 23 years old, spending the majority of his time studying music in many forms at various prestigious institutions. Now residing in Florida, Karandish has published his latest composition, Spiring of Hope, and it is a stunning, emotive collection of instrumental music.

Karandish’s love for orchestral compositions was made evident by the time he was a teenager and has since collaborated with many musicians from all over the world. He arranged an original composition “Eternity” for the Irvine Valley College wind symphony in 2001 and collaborated with Orchestra Surreal for a concert featuring his original music in 2003. His most recent work, Spirit of Hope, is a true showcase of his aims with his compositions – a blending of western and ethnic sounds, creating a modern twist on contemporary Persian music that transcends genre and instead embodies a style that is inherently unique. 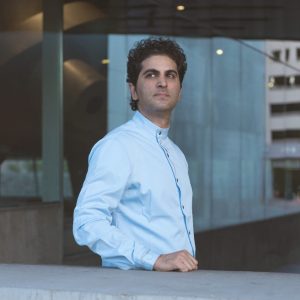 Sunset Sparrows has a dark and dramatic piano intro, delicately dancing between minor and major phrasings – in fact, it suggests more than just trace amounts of influence from Karandish’s middle eastern roots. These roots trace their way through this track, and although the modernity is unshakeable, the ethnic feel is almost equally omnipresent, though still totally accessible to those who are exclusively familiar with western music.

The addition of saxophone in Infinite Horizon gives the track an entirely unexpected jazzy tone, but not without hints of the grandiosity we come to expect from Karandish across the album. The percussion amplifies the unexpected with a rhythm that seems to hint at Latin influence.

Sacrifice of Soyembeyika starts with a dramatic, head-turning string intro, and is joined by haunting female vocals across the track. The combination of western and ethnic tones, alongside widely varied instrumentation paints a picture that could easily be of a sacrificial ceremony taking place. It’s foreboding and intense.

The melodic choices in Awakenings are complex and involved and do true justice to the musical styles that Karandish has combined. The soaring string parts offer a very modern feel to melodies that feel old and storied. The listener is gifted all of the intricacies of a piece of traditional classical music, but without any of the predictability.

The album opens with its namesake track, Spirit of Hope. An absolutely haunting, delicate piano introduces the music, followed by a classical guitar with a similar timbre. The track ebbs and flows with each passing melodic phrase, brightening and growing in intensity as it progresses. The interspersed presence of a flute adds a light, mysterious overtone that greatly adds to the track’s overall feel – grandiose, complex, yet still graceful in expression and execution.

A true fusion of cultures through music. A mosaic of melodies that sing praises of both the old and new. Kaveh Karandish has created track after track of soaring masterpieces on Spirit of Hope, each planted firmly in familiar western sounds but branching enthusiastically into a variety of other genres and tones, and his contemporary and Persian influences shine through again and again. For those who enjoy classical music but crave unique and fresh combinations of instruments and melodies, Spirit of Hope is absolutely worth a listen.

BELOW:  Listen to his album Spirit of Hope, and connect with his website and social media platforms. Please support Kaveh Karandish by visiting him online, and playing, downloading, and/or purchasing his music, or attending a live show! And, as always, thank you for supporting real music!

Listen to SPIRIT OF HOPE by KAVEH KARANDISH: