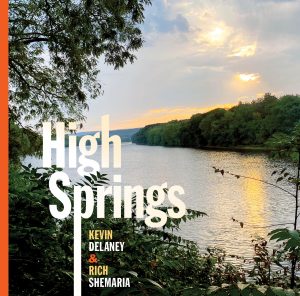 Below, you can read our interview with artist Kevin Delaney, and listen to his album High Springs. Check out our full music review of High Springs, HERE.

Q: Great to be speaking with you, Kevin! How did you and Rich get started performing together?

A: First off, great to be chatting with you, Jess, and thanks for your interest in our music! Rich and I live across the street from each other, in Upper Manhattan. And while hanging around our local café, we bonded over a mutual interest in helicopters, insomnia, and other people’s dogs. We come from very different musical backgrounds, but as a solo acoustic singer-songwriter I wound up opening for Rich’s super-amazing jazz group a few times. And one day Rich said, “Hey, those are cool songs, let me write out some charts, and we’ll back you up next time.” It’s been spiraling out of control ever since.

Q: You are based in one of the most musically rich cities in perhaps the world. What is it like working as a musician in New York?

A: Well, the quality of the musicians on our album speaks for itself! There’s just so much talent here. Rich himself is the composer in residence at New York University and has a deep background in jazz and classical music. Most of the other musicians live within a few blocks of us. They teach, play on Broadway, perform in orchestras at Carnegie Hall and Radio City, do studio work, all kinds of great stuff. As for me, I’m just a hack guitar player who somehow fell into this songwriting racket.

Q: You mention a long history of performance prior to this collaboration. How did you get your start as a musician, and what other projects have led up to this release?

A: I played in some long-forgotten but quite cool New York bands back in the day — Soviet Threat, 1000 Violins, FX, Project Xylophone, the Stumble Bros. — and performed at iconic clubs like CBGB, Maxwell’s, and Trax. Eventually, I sailed off in a more acoustic direction. But even while playing in loud, somewhat aggressive rock bands I never lost my love for Dylan, the Beatles, Nick Drake, Leonard Cohen, Joni Mitchell, Neil Young, all the great singer-songwriters. And I always thought a song should stand on its own with just one guitar and one voice (said the guy who just put out an album with an insanely great arranger/composer and nine other musicians).

Rich has had a stellar career. He’s worked with everyone from Tom Scott and Michael Brecker to Stevie Wonder and Lady Gaga. And seen his compositions performed in Finland, Shanghai, and Mongolia, to name just a few of the more exotic locales.

Q: How long did “High Springs” take to record?

A: We spent well more than a year on it. The pandemic was still a big factor when we started, so its beginnings were somewhat tentative. We recorded nearly all of it in Manhattan apartments, with a MacBook and a Neumann mic. Though the drums were laid down in the Long Island basement of Tom Swift, our wonderful mix/mastering engineer. He undid a lot of the damage from my somewhat limited recording skills and took out the charming New York ambiance of steam pipes and police sirens. In the end he was like a third producer.

Q: You and Rich have remarkably different musical backgrounds. What was the collaboration process between you like for this album?

A: Other than cursing out Logic, Sibelius, and ProTools, none of which like each other, it was a joy. We had a great friendship before we ever worked together. And similar surreal senses of humor. So, we spent as much time laughing as we did making music. Our budget was quite limited, so the DIY ethos prevailed, at least until Tom Swift arrived with some much-welcomed adult supervision. We experimented a lot — especially when Rich got inspired to bring in his expansive orchestral arrangements on a few numbers — and we worked through many challenges as they arose. I especially loved seeing Rich get fired up when one of my songs touched him in some way. At that point the ideas would just fly!

A: I started on a Hagstrom III, a cheap but pretty good Swedish electric guitar that I bought with my paper-route earnings on Long Island. I loved it! Though my family and neighbors may not have felt as kindly towards it. Rich grew up in L.A. where he played some no-brand guitar before his parents bought him a late ’60s yellow Fender Mustang bass with a racing stripe. I’m a guitar geek — and today own far too many, at least from my wife’s perspective — so I remember useless details like that. Rich is also rumored to have some serious trombone chops buried away somewhere. But he moved over to piano in a big, big way when the sheer breadth of his composing and arranging talents sought a wider outlet.

A: We’re not averse to getting insanely wealthy! But really, we put a lot of emotion into these songs. And we’d love to just reach some people and move them. I hope that my lyrics connect in some universal, emotional way. And I feel things like Rich’s stellar intros on High Springs, Out There, and Your Fragile Heart deserve to be heard. Would be great if something found its way into an indie film or offbeat series!

A: I think Rich would agree: Groucho Marx. He was a pretty good guitar player and owned a 1930s Gibson L5 archtop! Though he does not actually throw it off a canoe in Horse Feathers — at the last second, they substituted a cheaper model.

A: OK, that’s not fair. Not in the least. We both have super wide-ranging tastes. But I probably wore the grooves off multiple copies of Dylan’s Blonde on Blonde, especially the songs Visions of Johanna and Sad Eyed Lady of the Lowlands. Such poetry!

Rich would kill me for picking just one, ‘cause like me he’s influenced by so so much. But I know Sgt. Pepper looms large. It got him thinking about the power of arranging at an impressionable age.

A: Again, impossible to answer. But in this particular moment, John Lennon’s Across the Universe comes to mind. A stunning melody and visionary lyrics, with deeply spiritual insights on the nature of creativity. Ten minutes from now, I could pick something completely different.

Rich likes to say that his favorite piece of music is whatever one he’s creating at the moment. (I often feel the same — though sometimes two weeks later I’ll listen back and ask, “what the hell was I thinking?”) And while Rich can analyze the intricacies of a symphony by Dvorak before a college class, he continues to be mystified as to why Paul and Ringo’s simple backing on She’s a Woman grooves so beautifully. Music is all about the magic and the chemistry!

A: Well, despite including Elvis at 19, a pretty dumb but rocking song about driving all night to Memphis in a gas-guzzling vintage Cadillac, the album also features Long Walk to a Slow Train, a harangue about climate change (without ever mentioning the words climate change). So, it balances out at carbon neutral.

A: Well, again, the quality of the musicians who joined this project still blows my mind. They gave their all as pros, but with deep soul and a commitment to creating something beautiful and moving. Not to mention, each was kind-hearted, patient, and super fun to work with. There are particularly stirring moments from Gil Dejean, our bassoonist, Suzanne Gilman, our violinist, and Jim O’Connor, our trumpet/flugelhornist. Kaoru Hinata’s flute was beautiful, and Gena Taylor’s cello mellifluous and moving. Jerry Devore and Josh Bailey, our killer rhythm section, make sure it rocks, rolls, swings, and grooves throughout.

I hope the collective spirit of creativity and warmth comes across to listeners! We feel our mix of folk, rock, jazz, and classical makes for a unique listening experience. But in the end, it’s all about the emotion. As Elvis said, “it either moves me or it don’t.” That’s all that counts.

A: As a songwriter, it’s very exciting to see what began as a simple riff or lyric fragment that popped into your head one day, transformed into such sublime productions and arrangements. So, I’m deeply thankful to Rich and all the other brilliant musicians — for taking my songs to places I hadn’t imagined. I sincerely hope that the music touches all who hear it and brings just a bit of light to a troubled world.