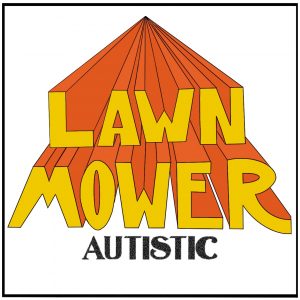 The Long Beach, CA-based solo project of Patric Moonie “has the sole intention to have fun“. The band named Lawn Mower features sister Claire Moonie on piano, Chad O’Connor on drums, Jon Summers on lead guitar, and Patric Moonie on the rest. Lawn Mower is a respite from Moonie’s day job and an outlet for his creativity, and it’s clearly visible in the execution of this project. Their recent album Autistic is a blend of gritty, unapologetic alt-rock that’s wholly unafraid to pursue its own distinct sound – a true mix of edgy and consumable.

The record opens with the title track – Autistic is a solid introduction to this group’s feel. It’s relaxed and unpolished, but very much in a listenable way. The arrangements across this album are often the focal point – in the opener, the introductory acoustic guitar into the driving electric guitars offer a seamless and strong invitation to dig deeper into this project.

This is followed by Pill, which leans more in the punk direction in its instrumentation and rhythm. It’s fast-paced, led by a back-and-forth guitar riff, and only clocks in at just under 2 minutes in length – short, sweet, and to the point.

The off-the-wall guitar intro in Heal You almost sounds like a warm-up exercise, followed by a bass solo of similar construction. The track builds into a dissonant, grungy number with an air of darkness and anger around it, the chromatic riff that permeates the track serving as the primary source of that feeling. 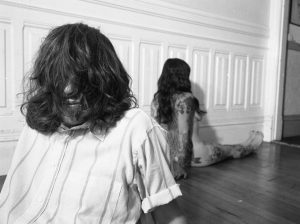 The closing track She Says is a monster at 8 minutes in length. It’s got a bit of a cinematic structure, with a long, slow build full of peaks and valleys along the way (the groove that opens up at the 1:38 mark really shows off the chops of the band members – fun and funky). It morphs into something spacey and psychedelic after the 4-minute mark, and gradually devolves into a cacophony of sound through its conclusion. Listening through this track in particular gives perhaps the clearest picture of what Lawn Mower is working to achieve – difficult to define and fearlessly pursuing whatever sounds and styles that appeal to them in the moment, their music is whatever the hell they want it to be, full stop.

The groove and twang in Uncle Sam create especially by the slide guitar sets us up sort of a CCR meets punk rock energy in this track, and they double down on that with the political undertones in the lyrics here. Across the record, the lyrics embrace both edginess and bluntness, absolutely unafraid to create scenes that are, at times, a bit unnerving (i.e. Yellow). But every now and then we get a glimpse of something a little more artistic, maybe even poetic at times, and this track has a few lines that fit that bill:

It all comes back to the initial statement from Moonie – this is a band creating an album for their own entertainment at its core, and it shows. Autistic radiates the lackadaisical energy, bold tones, and experimental styles that can only be written by a band that is truly working for itself. This is the total and complete opposite of the commercialized pop tunes dominating today’s radio – the raw authenticity and devil-may-care attitude of Lawn Mower are palpable in every track. If you’re into dissonant, boundary-pushing, entirely experimental, melodic, jammy punk-alt-rock, this project is a hidden gem.

BELOW:  Listen to Autistic, and please support Lawn Mower by visiting them online, and playing, downloading, and/or purchasing their music, or attending a live show! And, as always, thank you for supporting real music!

Listen to AUTISTIC by LAWN MOWER: