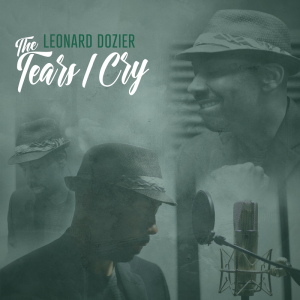 Below, you can read our interview with artist Leonard Dozier and listen to his album The Tears I Cry. Check out our full music review of The Tears I Cry here.

Q: Great to be speaking with you, Leonard! You’ve told us your love of performance began at the age of five – how much of an impact did music have on you throughout your childhood?

A: I think finding basketball and, in particular, Magic Johnson threw me off of the track of this musical discovery I had around age 5. I am an 80’s baby so the music of Phil Collins, Lionel Ritchie, and others really caught me very early before I found my love affair with basketball and Magic Johnson. Ironically, it was Magic who put me back on that track. You see, if Magic said he ate a certain type of cereal then I ate that cereal and when he mentioned his love for Luther Vandross, that changed everything for me musically. I was about 11 years old then.

Q: You’re originally from Pleasantville, NJ. Do you think growing up in close proximity to one of the country’s greatest music cities (NYC) had an effect on your musical career path?

A: It certainly did in my late teens as I was entering Fordham University in NYC. A longtime music collaborator got me hooked up with a local manager and the goal was getting signed by one of the big labels in NYC. I actually ended up getting a record deal through a subsidiary group to Polygram before they merged and became Universal. Lost my deal in the merger but having NYC as a backdrop undoubtedly put my musical aspirations in front of everything at that time, including a budding acting career. After all, I was a theater major at Fordham.

Q: Many of our readers might be familiar with your work in the voice acting world, as you’ve worked with the NBA, NASCAR, IPNOS, JAARS, and many others. You are also a two-time Broadway-World nominated actor. As someone so deeply entrenched and successful in the arts, do you find parallels between your acting-based work and your music-based work?

A: Absolutely, voice acting and acting, whether it has been on stage or film for me is about finding truth. As a songwriter, I tell the truth. Some of the songs on this new album have such jarring truth-telling in the lyric. I would also say that process has shaped my ability to tell the truth as a singer. I don’t worry about vocal dynamics so much (though I try to explore every bit of my range) as much as I seek truth and that musical and emotional prosody through my performance.

Q: You’ve compiled a particularly impressive production team for “The Tears I Cry”. What was it like working with Chris Davis, Bill Jolly, and Carl Culley all on the same release?

A: Chris, was that one guy, because of his work with artistic influences of mine such as Brian Mcknight, Will Downing, Phil Perry and others, that just had the pulse of adult contemporary music, especially in the urban arena. Chris has also been nominated for two Grammys. In reaching out to him, I didn’t even think he’d open my e-mail and yet he did and we produced my first real radio single “Sheltered In With You” which is on the album. A few months later we followed up with a Christmas single “Christmas Kind of Way” which hit the smooth jazz holiday charts. Working with the “Big Dog” (Chris Davis) has really allowed me to flex a bit in the smooth jazz world, which I would have never imagined. Then, came Bill Jolly. Now, you ready for this? I knew Bill’s name but never met him. A mutual friend of ours, said to me in a phone conversation: “You remind me of Bill Jolly.” That led me to Bill’s website and the rest was history. The guy’s resume is incredible and what struck me was his musical versatility. Deep in my musical blood, if you will, is a mix of singer-songwriter cells from the likes of James Taylor, Dan Fogelberg, Stevie Wonder and then there is some soft-funk in it as well, combined with some real jazz flirtation. Bill’s work encompassed all of that. Even more, there was undeniable chemistry between us…a peanut butter and jelly kinda chemistry truly. Finally, found Carl after a pretty intensive search for producers who were immersed in the 80’s sound (remember I am an 80’s baby lol) that you are hearing more and more of now. In fact, John Mayer’s most recent album really encouraged me to embrace this. Found Carl and once he heard the song, he knew instantly where to go with it.

Q: How long did “The Tears I Cry” take to record?

A: Considering Covid and then surgery pushed this album back by a year (and yet without both of those incidents the album would probably be a very different album) I knew with all of my lingering complications from surgery in June of 2021 that I had to find time and strength to really commit for about two months to the album. One song (“Sheltered In With You”) was already recorded. The incredible timing of the challenges to both my physical and mental health couldn’t have lined up better with my decision to pour into the album. I went in hard for about two months. A part of that was also listening to my body and mind along the way.

Q: You’ve told us that this is a deeply personal project for you, conceptualized after an unnecessary surgery left you with lasting complications. Can you elaborate on the difficult journey that brought forth this album?

A: In January of 2021, I was diagnosed as having a paralyzed left diaphragm that had moved up into my chest, ultimately pulling up my colon and reducing a good bit of my left lung volume. Just imagine that for a second. I have had a twenty year career as a performer, almost certainly with this condition since all indications are that it is congenital. No breathing or functional issues ever. Yet, surgery was done to reposition my physiology and open up my left lung. Little did I know that unless there are respiratory issues from this condition, surgery is unwarranted. I learned this after what was a painful surgery from other specialists in the field. Sadly, the surgery was also unsuccessful so anatomically I am essentially the way I was before surgery. It sucks. I have physical limitations and challenges now that I never had. Consequently, it has begun to wreak its havoc on me mentally. That’s saying a lot considering I am gifted with inherent optimism and have deep-rooted faith. Yet the combination led to me to confront the pain in my life, which then obliges you to confront the pain on the way to the new pain you are experiencing and you end up with a lot of tears. That’s what led to this album.

A: In a perfect world, I’m all over radio, music is streaming, songs are licensed to TV shows and I’m on a national “The Tears I Cry” tour, right? Sadly, if all of this were the case, I’d be unable to do it all because of my physical challenges and limitations I have now. So my musical career exploding at this point in my life would be more people discovering me in any regard…and surprisingly that is starting to happen little by little. It’s truly life-affirming.

A: Unquestionably, David Foster. I don’t think he knows that he and I are destined to work together lol…

A: Wow! This is tough. This might be one of his more obscure albums but it’s Brian Mcknight’s “I Remember You.”

A: “Suddenly” by Billy Ocean.

A: I might be the first actor in history, as has been said to me, to play a character, the AME founder and civil rights icon Richard Allen, on film, TV, stage, animation, and in audiobook format. If that is indeed true, that is some distinction. Also, I have narrated the last seven Super Bowl recaps for “NFL Films Presents.”

A: A shout out to my wife for her support and love during some unexpectedly difficult days at times. I also want to just send hugs and love to all of those who are broken, beaten, hurting, and grappling with all of life’s ills.

A: Thank you Ark of Music for what you do to keep the interest in artists, especially those that may not be as well-known, alive and well.

Listen to THE TEARS I CRY by LEONARD DOZIER:

leonarddozier · The Tears I Cry