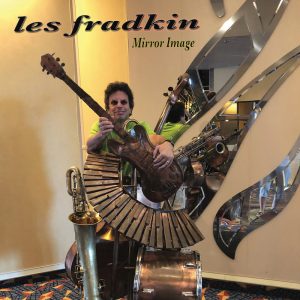 If you’ve been keeping up with our recent dive into Bongo Boy Records’ indie music video TV program, you might have gotten a preview of work from prolific and accomplished artist Les Fradkin. Performing over 1500 shows across the length of his career, Fradkin has released over a dozen projects in recent years, including Escape From Earth (2018), which received 3 Grammy nominations. However, you might be most familiar with his work as one of the original cast members of the Broadway show Beatlemania.

Fradkin’s most recent release is an EP titled Mirror Image. He’s perhaps the true epitome of a one-man band – at least, the Wikipedia community thinks so, listing him alongside greats like Steve Winwood, Paul McCartney, and Stevie Wonder who have all also played every instrument on some of their releases as well. This sets a high bar for his newest work, but to no surprise, Fradkin unquestionably delivers. Mirror Image is an introspective, inspiring collection of music that paints the world through a realistic lens of faith and hope.

The EP begins with Turn To The Movement, the track featured on Bongo Boy Record’s TV program. It’s a powerful opening to what unfolds into a powerful EP across the board. It cuts to the heart of the work in the very first hook, advocating for the listener to “turn to the light” and embrace the truth. But it’s balanced – the almost bouncy lilt to the track takes the edge off a bit, softening the intense message with a dose of musical lightness. 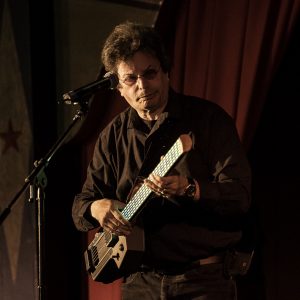 The ethereal intro of Remote Control is haunting, giving way to a soft dark rock rhythm. This track explores a darker theme, warning of leaders with malicious intent who gain control of our lives. The pounding, repetitive beat in this track is the perfect vessel for the message of monotony and anxiety.

Fradkin believes that the vocal tracks and instrumental interlude of Critical Mass “came to him from a divine channel“, and we would be hard-pressed to argue with that. While this is but a brief instrumental track, the pure ethereal, celestial timbre of this short interlude is both moving and awe-inspiring.

We also love the futuristic tones of The Lie We Live, blending spirited synths with a memorable memory. This track contains a bold and sweeping depiction of the world with the curtain pulled back – urging us to reject the falsehoods proffered by the elite and forge beyond the illusions to the truth.

Closing the EP is Living in a Black and White World. Previously released as a single, this track has been described as “socially conscious” in regards to current American life and culture, and we’re inclined to agree with that description. Featuring some of the most powerful writing across the project, this is a powerful and unforgiving conclusion to an eye-opening collection of songs:

But like several other works on this project, the juxtaposition between the heaviness of the message and the brightness of the music is fascinating and attention-grabbing. These words are backed by an almost gentle, thoughtful collection of instruments that features flutes, strings, and beautiful vocal harmonies. Listen once for the music, and then again for the message, and then a third time to put it all together in one enthralling composition.

Bold, insightful, and at its core, authentic. Les Fradkin is tackling real human issues in his work from a fresh and unique angle, effortlessly blending his faith-based worldview with music that embraces the analog sounds of days gone by. For those who appreciate a dose of classic pop and rock tones alongside powerful messaging encouraging a brighter tomorrow and denouncing the evils of today, you’ll find yourself right at home on Mirror Image. This brilliant EP will resonate with advocates for social justice across generations and true technical musical enthusiasts alike.

BELOW:  Listen to Mirror Image and connect with his website and social media platforms. Please support Les Fradkin by visiting him online, and playing, downloading, and/or purchasing his music, or attending a live show! And, as always, thank you for supporting real music!