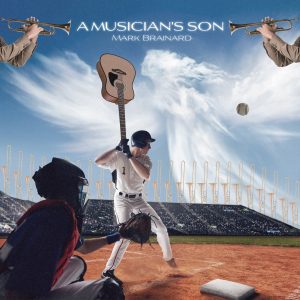 Q:  Great to be speaking with you, Mark! You’ve spent all of your life living in the L.A. area. Do you think being a lifelong resident of a music mecca has affected your work?
A: Yes, it has affected my work in a good way.  Over the years I have networked with several musicians and songwriters, and I feel good about being part of this community. I have made good friends and have been part of many cool musical projects. I wish I could have traveled more over the years, but my day job kept me in the L.A. area.
Q:  You mention your father specifically as a significant influence. How did he help to shape the musician you’ve become?
A:   My father was a professional musician and songwriter from the big band era.  He always told me, the difference between a professional and an amateur is “practice”.   He hooked me up with my first guitar teacher when I was 10 years old.  When he retired from the music industry, he became a lawyer.  Over the years he would book me for entertainment at social gatherings, and send my demos to clients in the music business. He even played bass in my first band.  Both my mother and father saw how The Beatles and Elvis influenced me growing up, and made sure I got their records on my birthdays and at Christmas.
Q:  You’ve been involved in the southern California music scene since the ’70s. How has it changed over the years? For better or worse?
A:  Southern California has always had a fierce competition in the music scene.  When my band played the original circuit in the ’80s, it wasn’t as much how we sounded, but how many people can we get in the door.  If we proved we could bring in a lot of people, we would get the prime time bookings.  We switched to playing covers for many years that helped us get a residency and make some good money.  In the early 2000s, I went back to my roots and started playing open mic’s.  I started performing with fellow songwriters and formed new bands.  It became less of a competition and more of a fellowship where everyone pulls for each other.
Q:  Your album “A Musician’s Son” was recorded between 2014 – 2021. Not many musicians have the patience (or fortitude) to work on a single project for that length of time. What was the process like? Was there a reason behind the long timeline?
A:  Most of the musicians on this album were friends that I have worked with over the years.  I did hire a couple of musicians to add their specialized parts.  We would start with laying down acoustic rhythm tracks to a click, add drums, and then add in other instruments with my final vocal coming last.  My engineer Brad Swanson was amazing in putting us all together as one cohesive unit.  In addition to working within a budget, I had two life events that took place.  I got married in 2016, and I retired after working for over 40 years in the motion picture industry.  The recording studio also relocated to South Carolina in 2019, and we had to finish the album remotely.  During 2020, I recorded another solo album (“Real”) in my home studio, which I consider my pandemic album.  Between January and March 2021, I put the final touches on “A Musician’s Son”.
Q:  You’ve told us you’ve written over 300 songs in the last 50 years – a wildly impressive number. What is your songwriting process like? Has it changed over the course of your career?
A:  Most of my lyrical ideas come from an intuition or a thought as I go through my day.  Sometimes when I pick up my guitar, I can stumble upon a chord pattern and melody that is really cool, and I make sure to record it.  If I feel I have something good, that’s when the work really starts.  Inspiration is one thing, but craftsmanship is another.  I studied songwriting at Cal State Northridge for two years under Jack Segal, and learned how important rewrites can be.  In the early days, I always took a notepad with me in case I came up with a song title or an idea.  At home, I would use my trusty cassette boom box and record demos.  This day and age, I use my iPhone for ideas.  My voice memos are always filled with licks, and my notes app is always filled with words.
Q:  Can you tell us about the first moment you picked up a guitar?
A:  It was when I got my first guitar for Christmas in 1965.  I was 9 years old.  When I picked it up, I would mimic the Beatles, Beach Boys, and Elvis.  My parents made my dream come true.
Q:  What was your first guitar? Do you still have/play it?

A:  It was a small nylon string guitar called St. George.  I still have it today.  Even though it can still be played, it is very brittle.

Q:  Perhaps in some unspecified amount of time, your musical career explodes in the best of ways. What does that look like for you?
A:  Now that I’m retired, I can dedicate more time to my music.  When I was younger, I thought an exploding music career was getting a record contract.  Even though we came close, it didn’t happen.  Today I take a very spiritual approach to my music.  When I can sell a CD to a stranger (not my family or friends) it feels really good.  The best feeling is when I can touch someone with my songs and receive great feedback.  My mantra is It’s never too late to write and perform songs.  Just put it out there.
Q:  You get to collaborate with anyone of your choosing. Who is it?
A:  That is a loaded question. LOL  There are so many brilliant musicians and idols to choose from.  With that said, I would love to collaborate with Jeff Tweedy of Wilco.  He is an amazing songwriter and producer.  I recently read his book, “How to Write one Song” and I felt so connected to his way of working and thinking.  He takes a very chill approach to his craft and always produces a great work of art.  I love that he is always on the cutting edge of rock or Alt Country, and it would be a fun experience.
Q:  Your favorite album of all time? (Yup, you gotta choose one.)
A:  “Ram” by Paul McCartney always sticks out as a personal favorite.  I love his organic sound and homegrown feel.  As a post-Beatles album in 1971, it may be the first indie record ever released.  Even though Paul and John were feuding at the time, it is still very Beatles like and takes me to a time in my life that gives me goose bumps.  I was grieving over The Beatles breakup, and Paul McCartney’s melodies and arrangements are unmistakably beautiful.  His flow from song to song with the different styles have held up so well over time.
Q:  Your favorite song of all time? (Again, only one!)
A:  Today, it is “Golden” by My Morning Jacket.  The melody takes me to a place of good feelings and retro vibes.  I originally thought this was a Neil Young song, but soon found out it was Jim James singing.  He lives inside every lyric he writes and invites me into his space.  It opened up a new world for me in listening to contemporary bands.
Q:  What would you like fans to know about you that they’re most likely unaware of?
A:   I am constantly humming and singing to myself.  Whether this is a nervous tick or a way to make me feel good, I love it.  My wife has been my most important inspiration in recent years.  She’s responsible for many of my best love songs.  I’m a big daydreamer and sometimes don’t listen to her like I should.  In addition to music and baseball, I am a big history buff and collect a lot of memorabilia.
Q:  Any shout-outs you wanna make?
A:  I would specifically like to shout out to Producer/engineer/drummer Brad Swanson who helped make my dream come true in releasing this record.  Special thanks also go to studio musicians Chad Watson (bass, piano, mandolin) and Rob Witham (lead guitar) who’s contributions to this album are immeasurable.  A final shout out to my music partner Tim Russell from (Brainard and Russell) who’s encouragement and support was so valuable to my solo en-devour.
Q:  Anything else you’d like to add?
A:  Thank you so much Jess for this opportunity to answer your questions.  I hope I didn’t ramble on too much. :)
—

<< Go to our full music review of: A Musician’s Son by Mark Brainard

Listen to A MUSICIAN’S SON by MARK BRAINARD: