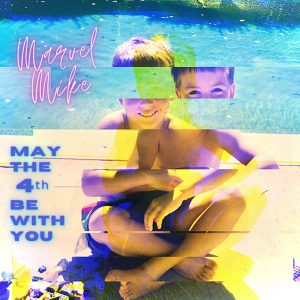 Burlington, Canada based artist Marvel Mike is a fully self-taught MC and producer. Honing his craft since his teenage years, his teaching career opened the door to a great deal of travel that has benefitted his artistic work, performing in places as distant as Kenya and China.

“The inception of this album came during lockdown back in April. I created the song “Strange Times In The City” as a way to put into perspective the new challenges we were facing. As it turns out, it lit the spark that would result in many months of writing music production.”

He’s been releasing music for nearly two decades, including the albums Marvelous (2004), Ill-Legitimate (2008), and Forward My Youth (2015). His fourth studio effort is aptly titled May The 4th Be With You, and this modern hip hop project is a testament to the skills he’s developed over the course of his career – this album radiates sincerity and dedication to the craft.

The album starts with  The Journey, and from its very first measures holds nothing back. Bright, melodic, and orchestral synths dominate the intro, giving way to Mike’s lyrics. He offers a compelling combination of intelligent word choice and smooth flow, something that proves to be a challenge for many indie rappers. We also appreciate the second appearance of a Star Wars reference, on this track in the second verse: “In some cities rap mighta had a clone war“.

Got That Bounce is inspired by the need for quality influences as a musician. Mike is so astutely aware of this critical element of good music-making that he breaks down his entire process in this track, reflecting on his work inspired by greats like Mannie Fresh and DJ Premier, all while explaining that he’s slowly and steadily crafting his own style. It’s paid off, clearly – despite a fairly technical and complex subject matter, this song is three-minute party.

We also love the closing track When The Time Comes for its particularly catchy melodies in the backing instrumentation. It’s something Mike does well across this project – while his lyrics are strictly rapped and don’t even hint at carrying any melodic tones, the beats that he builds beneath them are steeped in earworm melody phrases that give much of this project an inviting, accessible feel. It creates great cohesion between both the primary sections of this track and speaks to his skills as a producer.

We’ve heard so many quarantine-inspired songs that don’t quite cut it, songs urging togetherness or unity in these times of hardship with cheesy clichés. Very few songwriters have been able to capture the feeling of the past year without coming across as too on the nose. But on Strange Times in the City, it seems that Marvel Mike has managed to do what so many others could not. This smooth number has metallic, techno overtones, broken up by the wholly welcome inclusion of the saxaphone in the chorus – it adds a warm, melodic element over the cool and collected synths that drive the track (we see it quite a bit all over this project, but it’s a shining star here). Mike tells us this track was in fact inspired by the multitude of changes and difficulties we’ve all been facing during the pandemic, and in his lyrics his message is clear. But instead of trying to rally everyone together, this track simply observes how damn weird the last year has actually been. The end of the second verse really drives it home:

“The cash is tight, the stash is light,
If the fire don’t convince you then the ashes might
Dreamin of the moment when skies will seem bluer,
But what are the odds if lies still seem truer
2020 vision about the 19
Needed for people out on the frontline
The links must be strong in each part of the chain
As we make our way through this uncharted terrain”

If you’re a fan of underground hip hop, May the 4th Be With You is a must-listen. Full of brilliant word choice, high-level production, and authentic, genuine expression that comes through clear as day in this music, it’s a wonder this isn’t being heard by more people (yet). Come for the modern, fresh beats and smooth, inviting cadence, and stay for the insightful introspection that will leave you wanting a 5th album Marvel Mike far sooner than later.

BELOW:  Listen to May The Fourth Be With You by Marvel Mike and connect with his website and social media platforms. Please support Marvel Mike by visiting him online, and playing, downloading, and/or purchasing his music, or attending a live show! And, as always, thank you for supporting real music!

Listen to MAY THE 4TH BE WITH YOU by MARVEL MIKE: