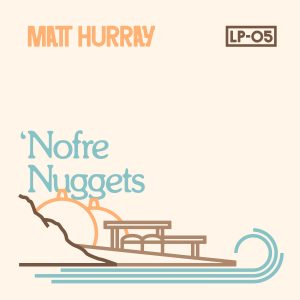 Below, you can read our interview with Matt Hurray and listen to his album ‘Nofre Nuggets. Check out our full music review of ‘Nofre Nuggets, HERE.

Q: Excited to be talking with you, Matt! You’ve been a musician since the age of 15 – has surf music always been the focus?
A: Surf music was not always the focus, but it did play a part of the process of learning how to play guitar. I was big-time into The Ventures, The Chantays, and The Challengers as a teenager and enjoyed learning how to play their songs.

Q: Surf rock is not nearly as common as it used to be, and it’s exciting to see that the genre is in fact alive and well! What got you into this type of music? And do you surf yourself?
A: As I mentioned, I was always into surf music. As a kid, my buddies and I would put on The Ventures Greatest Hits album (side one) as we were getting our bikes and boards ready to head over to 18th Street or Blackies, in Newport Beach to surf. Upon our return we would play side two and talk about our surf session and hang out. The music and the good times of those days always stuck with me.

In my previous band, we talked about making a surf instrumental album but never got around to it. I decided to move forward with a solo project that became Egyptian Surfer which consisted of eleven original surf tunes that was released in 2012. At this point I was hooked and immediately started to write and record songs for Unnecessary Commentary, an eighteen original song CD released in 2016.

Q: You perform both as a solo artist and with your backing band The Thrashers. Do you prefer one stage setup over the other?
A: I love performing with The Thrashers! The energy is rocking and they are by far the best band I have ever played with. Top quality guys and great musicians. It’s always a good time. With that being said, I also enjoy the smaller venue gigs where I perform solo with backing tracks from my recorded works. This creates an intimate setting where I can have conversations with and answer questions from the audience.

Q: You’ve got quite a few full-length releases in your catalog from the past decade. How has your music evolved in that time?
A: I have become a better guitar player and songwriter over the last eight years. I have really worked on perfecting the tone of my guitars when recording and I feel that aspect continues to gain strength. I am currently working on a new original album that I hope to release next summer.

Q: How long did “‘Nofre Nuggets” take to record?
A: ‘Norfre Nuggets took just under a year to record.

Q: You’ve mentioned that your daughters provided some of the background vocals in “The Endless Summer”. Is your family musical as well?
A: My family is musical! My wife grew up playing the piano. My daughters play guitar, ukulele, and piano. They enjoy singing and listening to all kinds of music. Wherever we are, we are surrounded by music!

Q: What was your first guitar? Do you still have/play it?
A: Acoustic: Takamine (the action was so high that it took me a while to be able to play bar chords!)
Electric: Squire Stratocaster (Made in Japan) This guitar looks like it has been through a few wars, but still sounds great!
I still have both of these guitars and play them regularly.

Q: Perhaps in some unspecified amount of time, your musical career explodes in the best of ways. What does that look like for you?
A: More shows and more travel. Sounds fun!

Q: You get to collaborate with anyone of your choosing. Who is it?
A: Dave Faulkner or The Hoodoo Gurus… That would be awesome!

Q: Your favorite album of all time? (Yup, you gotta choose one.)
A: London Calling / The Clash

Q: Your favorite song of all time? (Again, only one!)
A: Death or Glory!

Q: What would you like fans to know about you that they’re most likely unaware of?
A: I have a Rose Bowl ring

Q: Any shout-outs you wanna make?
A: Shout outs to The Thrashers and everyone who enjoys surf tunes!

<< Go to our full music review of: ‘Nofre Nuggets by Matt Hurray