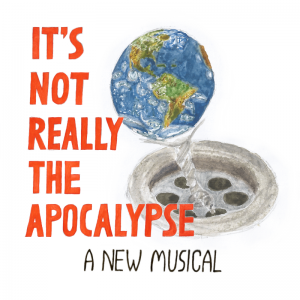 We found it surprising that It’s Not Really The Apocalypse – musical written by UK based composer Michael A. Grant – is already over a year old. The title alone seems like a direct reference to the current state of the world in 2020. But this project took Grant 18 months to write and another 5 to record – this is just a very well-timed release of a charming, quirky, and genuinely fun musical that begs the question – why does the apocalypse have to be so serious?

“The apocalypse seemed like the perfect subject matter, as it is a doom-laden topic but one that is easy to poke fun at (seeing as it has been explored so extensively, to the point of cliché). “

Grant is a lifelong musician and a professional woodwind performer, but It’s Not Really the Apocalypse is his first musical. He came up with the idea for the production when performing a ragtime-centric piece as a member of a pit orchestra. This show was written to intentionally juxtapose the jovial style of ragtime piano with the seriousness of the end of the world. And it does exactly that – It’s Not Really the Apocalypse is a funny, lighthearted take on armageddon that develops relatable characters and follows them on a complex emotional rollercoaster that is human relationships in a post-apocalyptic world. 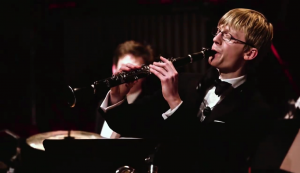 The musical starts bright and earnestly with a track titled Let’s Go on a Four Day Bender. The song details exactly what you might expect – all of the things you could expect to happen when a group of rowdy friends gets together for several nights of tomfoolery. This includes starting fights you cannot win, forgetting to pay your bar tab, and passing out on a policeman, all the while torturing your liver. Upon waking from the nasty hangover this has caused, our heroes find themselves the lone survivors of the apocalypse.

It’s Harder Than It Looks introduces our first conflict between our surviving protagonists, as each of the four is dealing with accepting their new roles in the post-apocalyptic world – between leadership, work division, and struggling with the loss of their previous lives, the uptempo yet dark melody and bouncing style of the pianos here really drive the tension home.

If I’d Known is a lovely reflection from Helen and Lizzie on all of the things they wouldn’t have wasted their time on had they been aware that the end of the world was nigh. The vocalists that Grant chose for these parts – Carolina Garcia-Cox and Emily Chesterton – really shine in the gorgeous harmonies in this track. The vocals are sincere and emotive, and the message – spend more time doing what you love while you have the chance – is relatable far beyond the scope of this production.

The finale track titled It’s Not Really the Apocalypse brings us to a satisfying conclusion – the world hasn’t truly ended if there are people left alive to sing. After their many trials and tribulations, our heroes are reunited as one group, and they appear optimistic about their future, singing:

“So what if we forgot just what we four have got?
For sure we four have got a lot to be thankful for,
And so what if often we are prone to disagree?
At least we’ve got each other’s company.”

We love The Last Man Left on Earth for addressing a common trope in an uncommon way. Variations of the expression “I wouldn’t be with you if you were the last person on earth” have been uttered hundreds of times across various forms of pop culture for years. But in this story, two of our protagonists Lizzie and Gary have a brief romantic history that culminated in this phrase, only to find themselves as the last two single people on the planet. Gary, who was previously rejected by Lizzie after a single date, has become potentially her only option at any sort of love or romance ever again. Like much of this musical, it’s a fun, lighthearted take on something that would be otherwise depressing.

Endlessly relatable and unapologetically witty. Musically simple yet emotionally complex.  Michael A. Grant has done a phenomenal job using simple piano and intentional musical structure to tell genuine human stories amidst a humorous take on a disaster. It’s Not Really the Apocalypse is the most fun you could ask for from the end of the world. And the general state of the real world today is wearing on you, give this a listen, and remember that if we have each other all can never be lost.

BELOW:  Listen to his album It’s Not Really The Apocalypse and connect with his website and social media platforms. Please support Michael A. Grant by visiting him online, and playing, downloading, and/or purchasing his music, or attending a live show! And, as always, thank you for supporting real music!

Listen to IT’S NOT REALLY THE APOCALYPSE by MICHAEL A. GRANT: