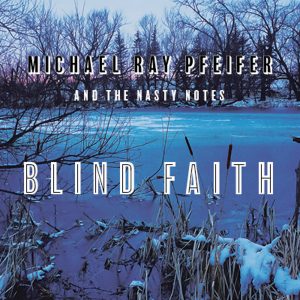 Minneapolis, Minnesota-based singer-songwriter, Michael Ray Pfeifer, has been making his brand of heart-felt Americana, alt-country music for some time now. Recently, he’s teamed-up once again with his band—The Nasty Notes—for their third studio album, the bright and unique, Blind Faith, which follows-up 2014’s The Higher You Climb, and 2010’s Fire On the Radio.

“Be true to yourself and make the music you love.”

Writing and singing all of the songs on the album, the rest of his nasty crew consists of: Casey Smith (guitars, bass, mandolin, vocals), Ryan Inselman (drums), Curt Hutchens (guitar on Rockets), Dan Carlsen (bass on Rockets), and Pat Wheeler (guitar on Pretty as a Rose, The Sun Still Shines, and Merry Go Round). 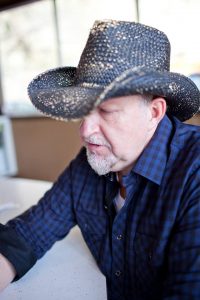 Our Favorite Track…
From its opening bar, the dangers of human lust are laid out well in the very Beatles-esque, Pretty As A Rose; which offers attitude and a catchy lyrical hook, mashed-up with a great rock’n’roll chord progression and fantastic rhythm track. This song belongs on the radio, a soundtrack, somewhere.

Another epic production and ode to lost love, Blind Faith, continues that fantastically epic modern spin on the 60’s rock sound. Be sure to stick around for the first slide-guitar solo at 2:46—the music is absolutely enveloping.

Stones Throw Away has a minimalist beauty which makes it a very close second to Pretty As A Rose. The track often consists of nothing more than Pfeifer’s bright, airy vocals and a touch of acoustic guitar in the background. Other synth, electric, and percussive elements dance in and out, creating an ambient listening experience that might be compared to a hypothetical collaboration between Travis and Massive Attack. It’s dark and wonderful.

In Conclusion…
I’ve said it before, and I’ll say it again—it’s the best feeling in the world when an album takes you by surprise. Admittedly, I assumed by the Michael Ray’s press shots and album cover that I was in for a country album. (For the record:  This is absolutely not an admonishment of country music—I love good country music!) But the point is, this album is as far from country as one could get. It’s more like a modern-day take on The Beatles-style of 60’s pop-rock with added depth and character.

An album dedicated to all sorts of love, Pfeifer bravely shows both his darkness and light, his stoic and playful sides. It is this contrast—as I’ve also said many times—which is crucial to the intriguing nature of the album. If you can still remember the days when even popular music was about something, when depth and substance still mattered to the radio, and if you’re still searching for that kind of music…you’re going to enjoy Michael Ray Pfeifer’s, Blind Faith.

Whose lovechild..?
The Beatles meet Travis.

BELOW:  Listen to Michael Ray Pfeifer’s album, Blind Faith, and connect with his website and social media platforms. Please support Michael Ray Pfeifer by visiting him online, and playing, downloading, and/or purchasing his music. And, as always, thank you for supporting real music!