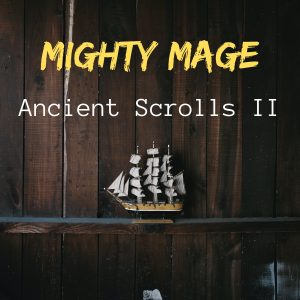 Mighty Mage – otherwise known as Khalid Hussain – began his foray into the musical arts at the age of 15 after being cast as Aladdin in a local production. From that point on, singing (and later guitar playing) became a regular component in his life. He released his first album just over a decade later, and currently, he’s released more than six professionally recorded projects under several different artists’ names.

Growing up in La Jolla, California, the music of Mighty Mage has roots in folk, rock, and reggae sounds. These influences are all most definitively present on his most recent release, Ancient Scrolls II. A follow up to the original Ancient Scrolls – a collection of music from his earlier years – Ancient Scrolls II is a similarly structured collection of music from days of Hussain’s past. These ten tracks showcase a wonderful range of lyrical beauty, elements of pop catchiness, rock rhythms, and above all, straightforward simplicity that allows his writing to shine.

Time Of My Life has great, lighthearted folk-pop energy, and a tone that has just a hint of an island feel. It’s bright without being too aggressively optimistic – rather, Hussain says “I know sometimes it doesn’t go well“, but aims to have a good time despite this. It’s got a bit of a “Don’t worry, be happy” vibe.

Living up to its name with darker production and a more intense tone is The Epic. The melancholy acoustic guitar intro gives way to emphatic bongos and a powerful bassline quickly driving the track along. This song tells the fantastical story of a wolf and lioness, and it’s delivered in a way that’s reminiscent of a parable.

We would guess that Searching For A Song was born out of real-life inspiration, as it speaks of something nearly every songwriter can relate to. The desire to create a song that captures a certain image or feeling can be a regular challenge for a writer, and the idea that its discovery is paramount is a familiar feeling. Hussain states it quite succinctly:

“Where could it be?
This song eludes me,
I need it to be free
Someone help me”

The inclusion of the saxophone on this track is also a great choice, adding just a touch of jazziness that makes this a stand out on the album.

We also love My Love for its vibrance and bouncy, percussive beat. Of all the tracks on the record, this one feels like it’s the closest to a true folk-rock-reggae hybrid. It’s captivatingly upbeat and instantly catchy; the kind of song you’ll instantly find yourself tapping your feet along to.

The album opens with Oh My (Acoustic) and closes with Oh My (Electric). There’s a lot to like about including two versions of the same track on one album, but on this project, it works especially well.

In both, the lyrics are beautifully simple, insightful yet uncomplicated, and incredibly relatable for it, especially given the turbulence this past year has presented all of us with:

“Oh my, how the world is changing
Oh my, how strange this all is now”

The acoustic version opens the album with soft reggae tones that puts the gentle melody carrying these broad and sweeping lyrics at the forefront of the track. In the electric version, different components of the song are highlighted – like the lovely female backing vocals and driving electric guitars – without losing the reggae feel. It almost seems to transform the meaning of the song. In the first, Hussain feels like a passive observer of the chaos of the world, but in the second, it feels as though he’s comfortably caught up in the middle of it. It’s a beautiful example of the impact production choices can have on a song’s interpretation.

Uncomplicated, unpretentious, and remarkably easy to listen to. Ancient Scrolls II is a great showing of songwriting skills and wise production. Khalid Hussain has shown us that you truly don’t need to overcomplicate things to make great music. On this project, Mighty Mage exudes authenticity and sageness in his style. Hussain has expressed interest in delving into electronic styles of music in the future, but with his clear artistic skills, we look forward to his expansion down other musical avenues. We’re sure it will be as enjoyable to listen to as Ancient Scrolls II has been.

BELOW:  Listen to Ancient Scrolls II and connect with his website and social media platforms. Please support Mighty Mage by visiting him online, and playing, downloading, and/or purchasing his music, or attending a live show! And, as always, thank you for supporting real music!