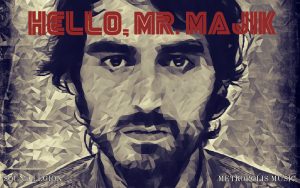 Wales, UK-based artist Mr. Majik calls his artistic work “Music for the Revolution“. He releases all of his music with a Collaborative Artists Music House called Sound Legion that he started with his wife (artist Bonnie Legion) in 2015.  Mr. Majik has multiple releases under his belt, including an EP titled Purgatory, but his most recent release is a full-length album titled Hello, Mr. Majik. This 15 track LP is chock full of sharp, cutting lyricism and witty and unapologetic retorts that appear to define his niche within the thriving UK hip hop scene.

From the very first line of this album, you can gauge the intensity of the lyrical content Mr. Majik prefers to create. After the particularly cinematic intro to Postal, it’s rapid-fire brutality from there on out. “Might turn up at your house with a home-made bomb” is about the most intense opening line to an album one could write. Edgy? Yes. Effective? Also yes. Beyond the shock value are well-timed delivery, a great flow, and well-composed lyrical concepts that make you listen and pay close attention. 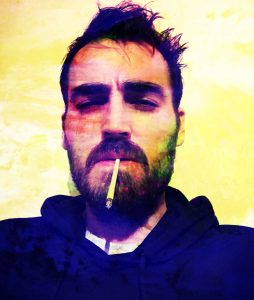 And while the sheer intensity of things is a theme across the entire album, each track retains its own distinctly different flavor. Insurgent takes on an inherently metallic, futuristic feel in production and becomes a full-on battle cry in its lyrics, while the piano-driven arrangement in Replicant is a softer introspective take on purpose and place in the world.

Looking underneath some of the tougher outer layers of a few of these tracks is a softer and more revealing center. Perhaps the best example of this is Half the Sky, which is a beautiful tribute to the strong and influential women in Mr. Majik’s life. But contrast this with the raw sexual intensity that is Daddy, and it’s clear that Mr. Majik is unafraid to cover all ends of the spectrum on any issue he wants to tackle within his work.

Ecstasy features a few particularly poignant lyrics that touch on the current socio-political landscape of the world (another topic you might be surprised to find on an album like this, but unsurprisingly, it’s delivered again and again as successfully as anything else). The most notable lines are most definitely “this generation’s Shakespeare is probably serving burgers”  and “they just wanna go to the bar and get corona, I just wanna spit a bar as sick as Covid“, but his entire take on persevering through tyranny is incredibly well-said. His delivery on this one has a great, almost melodic lilt to it that gives it a bit of an old-school feel. This same kind of commentary is present in Industrial, if not a little more direct, and represents some of his most compelling lyrical work on the album:

“Stand and fight, let’s hang the tyrants, we’re undivided, fuck the giants,
Ninety-nine David’s and one Goliath, food for thought, there’s a fucking hunger crisis,
There doesn’t need to be, but they’re so deceitful, there’s more empty houses than homeless people,
I wonder why, I just wanna fucking provide, but the game is rigged, I can see the blood in my eye“

Bonnie and Clyde in Space has a fun and electric melody in the synths that drive it, but the vocals of Bonnie Legion in this track are a warm and wonderful addition to the spacey sounds on display. Her voice works brilliantly against the grit that Mr. Majik brings to this (and every) track. The back-and-forth between them creates palpable chemistry, and the track flows perfectly despite the constant change in lead vocal. Combine this with the smoky melody that serves as the foundation for the chorus, and the result is a very different listening experience than much of the rest of the album. This change, however, only serves to showcase the extended artistic range of Mr. Majik – his writing works here as well as anywhere on this project.

The music of Mr. Majik is not for the faint of heart – oftentimes it is raw and vicious, unpredictable and temperamental. But it’s also so much more than that – there is nuance, intent, and feeling in this music, something that this kind of rap is often missing. If you’re looking for quality production beneath carefully written lyrics, delivered by a rapper with obvious performance skill who isn’t afraid to push the envelope of expectation, then Hello, Mr. Majik is very likely for you. Mr. Majik is a dark slice of the UK hip-hop scene seeking to inspire and incite, and no topic is 0ff-limits. If the revolution is coming any time soon, we won’t be surprised to hear this on the loudspeakers from the riot that starts it.

BELOW: Listen to Hello, Mr. Majik, connect with his website and social media platforms, and find his booking & contact information. Please support Mr. Majik by visiting him online, and playing, downloading, and/or purchasing his music, or attending a live show! And, as always, thank you for supporting real music!