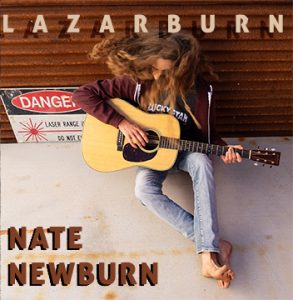 Below, you can read our interview with Nate Newburn and listen to his album Lazarburn. Check out our full music review of  Lazarburn, HERE.

Q: Great to be speaking with you Nate! You were born in L.A., a music mecca that so few are originally from. Did your early childhood there have any influence on the music you would later create?

A: Hi. Great to be chatting with you too! Yes. My early childhood in LA definitely influenced my music. Not so much in style in so much as access to incredibly talented musicians/teachers, all who’ve found their way to LA for music. This melting pot of talent is so vast and I’m just lucky to have found amazing mentors along the way who’ve had huge impacts.

Q: You spent a good deal of time in Cape Town, South Africa. How much did your experiences there shape your musical identity?

A: Infinitely – and much more than just my musical identity. From introducing me to African music and completely shifting my style of playing, staying on a traditional homestead in the middle of the forest, living off the land, immersing myself in drumming during all night ceremonies, showing me a completely different way of living, detached from the frenetic/frantic speed of the modern world.

Q: Your musical roots are pretty varied, ranging from Green Day to Bob Dylan to Radiohead. Which artists tend to influence your work the most today?

A: Um that’s very hard to say, however since the covid-19 induced lockdown and stay-at-home orders I’ve gotten into exploring tons of new music and I’ve been spending hours and hours finding so many mind-bogglingly good artists it’s been amazing. So I would say the most recent artist I’ve gotten into probably. At the moment I’ve been listening to a lot of jazz and Afrobeat and am loving people like Art Blakey and Fela Kuti – though with Fela Kuti I struggle with the moral dilemma of his apparent misogyny.

Q: The lyrics on much of “Lazarburn” are cutting commentary on big issues mixed with poetic delivery. What is your songwriting process like?

A: Thanks. It’s not so much a process in so much – as corny and cliché as this sounds – a download. If I think to myself, ok, it’s time to write a song it’ll either come out shitty or it won’t come. Songwriting has always been my means of expression so anything that personally affects me or something that I observe that creates a strong reaction I find that the song or poem will come from that, yet it draws on something beyond me or any of us, and in no religious means. Rather, I think it’s a universal energy we can all draw on.

Q: In that same vein, if listeners could take away one message from the music you’ve created on this album, what would you want it to be?

A: Protest because our lives depend on it.

Q: How long did “Lazarburn” take to record?

A: It took a couple recording sessions, each around 2/3 days of actual studio time.

Q: Can you tell us about the first moment you picked up a guitar?

A: It was a cheapie for a Bob Dylan Halloween costume and it definitely hooked me.

A: Um it was an Epiphone acoustic guitar and I had it until I was around 17, when it blew out of my hands on a windy day in Cape Town (fun fact, 100 days of the year have gale force winds there) and that, heartbreakingly, was the end of her.

A: It would be an honor for my voice to help add awareness to the plight of the planet and our daily world and to be part of a broader healing of the earth. So using my voice to create awareness for different social issues and environmental issues and being able to travel to amazing places around the world with my music.

A: Thom Yorke, but that could change.

A: You’re killing me! Probably American Idiot by Green Day due to it’s early impact on a 10 year old Nate who became obsessed with writing political American Idiot knock-offs based on my imaginary cat-world, repeating all the ‘fuck the government words’, including many a fuck (I’m sure to my parents delight) without having a single clue as to what anything actually meant. But it seems to have left me in good standing.

A: Hmm. Do I have to answer? Um, as ever-changing as this answer is, I’m gonna go with It’s Alright Ma (I’m Only Bleeding) by Dylan.

A: That if it all fucks out, I’m off to that remote area of South Africa I spoke of earlier to homestead, grow my own food, smoke my own weed, play as much music as I want, and live off the grid.

A: Besides my mom and dad – constant unwavering support, Robbi Robb for always being there for me and helping me turn my songs into the gems they have become, the beat shaman Danny Frankel for the incredible drums and percussion (and educating me on many different drummers), groove goddess Janie Cowan for the double bass, Alon Goldsmith for all the magnificent photography, album art work and life-long support, and way too many more people to mention.

A: I have a music video coming out November 25th (Thanksgiving) for an upcoming single from Lazarburn, Can’t Be Swayed (No More), which I’m very excited about. Also my full album will be officially out sometime in December.

<< Go to our full music review of:  Flesh & Metal by Noah James Hittner

Listen to LAZARBURN by NATE NEWBURN: