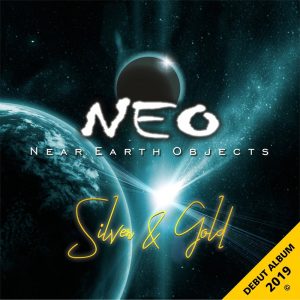 We’ve seen our fair share of bands get their start the same path as English rockers Near Earth Objects (NEO). The group was founded in 2011 and currently consists of Grant Huck (vocals), Toni Tockz (guitar & keys), John Mansell (bass), and Darren Snow (drums). Originally a bar band, they collectively decided they were tired of just playing covers and decided to work on something uniquely their own. In their words, this was their plan to “prove that being old does not prevent you from writing and performing original music.”

In fact, the band mentions more than once that they are of an older generation, but in all honesty, we never would have known had they not told us. Neither production, performance, nor songwriting on this album has an ounce of out-of-touch tones or signs of yearning for days gone by – though we do hear influences from some of the all-time greats in their genre, who just happen to be older as well. Their debut album Silver & Gold is quintessential modern alt-rock executed at an unquestionably high level. 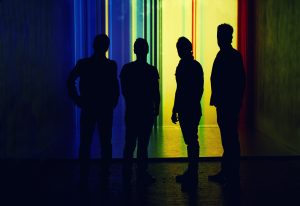 Opening the record is Strength of a Word, which introduces us to NEO with a beautiful, delicate guitar alone. The track builds very gradually, the chord progression often moving in unexpected but altogether welcome ways. The track opens up around the two-minute mark, and we get a taste of the full band sound, complete with vibey undertones and a driving beat. We’re fully hooked by the time we arrive at the guitar solo at 2:24 – there’s not much else like two guitars playing in note-perfect harmony, and it’s often difficult to execute well, but NEO has exceeded all expectations here.

The bright synth intro and uptempo energy of Adjust the Light is infectious. The intermittent synths add an almost sparkly quality to the track that is altogether unique for this genre. Huck’s vocals shine here as his versatility becomes more apparent. The dynamic range in this track (and many others on this record as well) is quite large, but his voice handles the jumps from lows to highs without any apparent difficulty – a mark of a talented vocalist.

Run for the City has a bright, melodious acoustic guitar intro, breaking the heavier tones up nicely across the record. This track is a touch more delicate than many of the others on this record, and we love this inclusion as it shows off the range NEO has as a group. The outro is reminiscent of Bruce Springsteen, someone who we rarely see emulated this well.

Deep Down takes us in a very soulful, bluesy direction, but without losing any of NEO’s signature rock edge. This track really highlights the skills of each of the band members. The melody absolutely suits Huck’s powerful and gritty voice, the guitar work from Tockz is once again in a league of its own, and the hard-hitting rhythm section of  Mansell and Snow play off of each other perfectly to really drive the beat home.

We also love Love Another Day for bringing a bit of funk to this rock record. The intro riff here has serious Delbert McClinton / Standing On Shaky Ground vibes, but with the addition of some spacey synths and heavier guitars, we end up going in a completely different direction. By the mid-point of this 6+ minute monster of a track, we feel like we may have even wandered into a psychedelic rock album. The song is cohesive across its parts, but the arrangement keeps you listening, wondering where we might end up next.

Hard-hitting melodies carried by exquisite vocals. Complex arrangements and chord changes that keep you guessing in the best of ways. Guitar riffs that are so expertly played that they quite nearly take your breath away. Driving, powerful alt-rock that emits authenticity and intention everywhere you turn. NEO might reference their ages as a negative thing,  but after listening to Silver & Gold, it’s clear that with their tenure there has also come serious skill and true understanding of their craft. This is a phenomenally produced record from a group whose music we expect will resonate with fans of both modern and classic rock alike. We’re already looking forward to the sophomore release from Near Earth Objects, and after you listen to their debut, we’d be willing to bet you will be too.

BELOW:  Listen to Silver & Gold and connect with their website and social media platforms. Please support Near Earth Objects (NEO) by visiting them online, and playing, downloading, and/or purchasing their music, or attending a live show! And, as always, thank you for supporting real music!

Listen to SILVER & GOLD by NEAR EARTH OBJECTS (NEO)