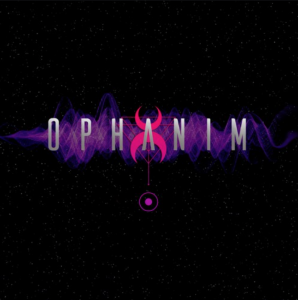 Below, you can read our interview with OPHÅNIM and listen to their self-titled album. Check out our full music review of OPHÅNIM, here.

Q: Great to be speaking with you, Jason & Carolyn! OPHÅNIM is currently based in Texas. What is the scene in your area like for electronic music?

Jason: Very small. I’ve been here for many years, mainly working/playing as a folk/country artist, but as an electronic act we really stand out and are part of a much smaller pool of artists.

Carolyn: I’m still new to Texas, only been here about a year. In Canada (Where I’m from) the scene is much similar where electronic music doesn’t get quite as much attention.

Q: OPHÅNIM is a duo – how long have you been performing together?

Jason: We met on Twitch in 2021 and did a collab project in the digital studio. In August of ’21 we were performing together in a cover band locally here in Texas.

Carolyn: I guess we’ve been performing together since Aug of 2021. It’s true what he said about Twitch, lol. I stream my solo music projects there part time. That’s where he found me, and how we started talking music and became friends.

Q: This self-titled project is the band’s debut album. Do you feel this is an extension of your sound created on your “Live at Spyker Studios” EP or an evolution in the band’s style?

Jason: The reverse actually, lol. We did the album first, mostly remotely (her in Canada, me in Texas). So the live EP is what we were able to reverse engineer once we were in the same place together.

Carolyn: It was really cool putting together an album remotely. I hadn’t really done that before. This album is actually kind of an extension of the original EP Jason asked me to collab with him on, which we also did remotely.

Q: How long did ” OPHÅNIM” take to record?

Jason & Carolyn: We started in April of ’21 and had it wrapped up by Sept. We were able to finish the final songs together.

Q: The music on your new album is nuanced, layered, and complex. What is your songwriting process like?

Jason: So I came from the folk/country scene and am a relative newcomer to electronic music (been making since 2016) but I’ve found great fun in working with loops and digital instruments, really exploring the sounds and almost finding a song within. For the Ophanim record I was blessed to have Carolyn provide us beautiful, ethereal soundscapes as well as epic drums and basslines to work within.

Carolyn: Yes, I do love my basslines :] lol. It’s funny because I come from a similar background of folk and country music, with some classical thrown in from my mom, but I quickly found and started incorporating ambient and electronic sounds to my arrangements. I’m an inherent improviser so most of my music comes from just picking up an instrument and noodling, whether it’s in a recording program like Ableton live, which is what I use, or in real life. From an improv I’ll go back and make any edits for an ‘album version’ and someone just leave it.

Jason: Guitar. I started playing when I was 10 and I haven’t put it down since. That’s me on the album ;)

Carolyn: My first instrument was piano, I started when I was 5, still playing 26 years later :] You can hear it throughout the album (particularly on “Transmission”).

Carolyn: Two words. “World Tour” (laughs) but in all seriousness, what I see is us able to perform and create in interesting, fascinating and inspiring places, whether that’s in a legendary studio, venue or near a volcano! I see us being able to tell our stories in the best ways, and what I mean by that is, I want our music to speak to the souls of others, help them experience something they may never have before, I think everyone should be able to.

Jason: In addition to all she just said, the best explosion for us is one that gives the most people the chance to enhance their life through our music. Music for me has always been my way of getting in touch with my higher self and it’s my hope and wish that other people can experience that and if it’s via music that we had a hand in creating then we are successful.

Both: There’s an Italian electro/house duo, Giolì & Assia. Check ’em out. We would absolutely collab with them if we had the chance.

Carolyn: “Art Angels” by Grimes, it’s the only one I can listen to anytime, anywhere, on any occasion, but my favorite time is in the morning when I wake up.

A: It is a legit tie between Reality (Original Demo) by Grimes, and a song I wrote for Jason called OYCMMFTW. Both do things to me that others songs just cannot do.

A: We like to put lots of “easter eggs” and lore in our music and videos, so really attentive fans have something special to discover.

Carolyn: I want to shout-out to my dad, he’s given me so much to help me move forward with my life and believe in myself. He straightened me out, showing me how to keep lists like a pro and generally stay organized.

Jason: Mom and Dad, without them I would never have picked up a guitar nor had the means to pursue music as far as I have.

A: We are already working on album number 2 so stay tuned.

<< Go to our full music review of: OPHÅNIM by OPHÅNIM