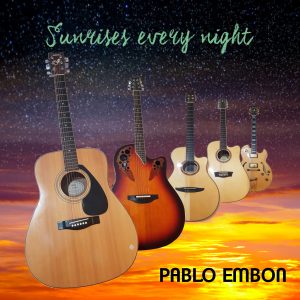 Q: Always good to be speaking with you, Pablo! Tell us about what you’ve been up to since this past February and the release of “In Your Skin”.

A: “In Your Skin” led the way to enhance some new areas in my music career development. That’s how I started working on my next project “Sunrises Every Night”, my new album releasing on December 15. Similarly to my previous album this one is also a collection of several Jazz stylings and Fusion Instrumentals. This production, however, is a concept album with parts and pieces suggesting the idea of people being able to find their own daily miracles in life (such as sunrises in the middle of the night) in order to move forward and grow. This concept shows in each track from different angles and musical styles but they all blend together towards the same goal. During the past year, I’ve been developing my vocal skills, working on different techniques, which is something I didn’t do much so far, but now it’s there, to support the new concept album in driving a journey of melodic exploration.

Q: Two albums in one year can be challenging. What inspired you to start on a second release this year?

A: The personal need to be creative, explore new things musically and produce music does not know much about calendar frameworks. The music creation process is kind of autonomous so to speak and I typically let it flow. Large number of elements in the new album are conceived as closing circles during the last 35 years of music journey. Incidentally I decided to include a song named “Sueños” which I composed in 1987 by completely rearranging it and taking it to a different place. Sometimes it feels like coming back is a way to move forward in music and this is exactly what happened during the recording of this album.

Q: You’ve released over 20 albums since 2004. How much has changed in your music and creative process since your first release?
A: My music has definitely evolved throughout the years. Developing myself as a musician and producer creates much greater possibilities. The technical aspects of music production have also changed dramatically as well. I became aware of the fact that music production itself is also an art. It is not just enough to record a song. It must transmit beauty along the way with the message itself. This is the main reason I spend a significant amount of time on nuances, which I believe are the key aspects of bringing a good song into something really exciting.

Q: You refer to yourself as a “jazz-fusion” artist. On “Sunrises Every Night”, what other genres did you most often find yourself blending with your jazz roots?
A: The concept of Fusion in my mind brings the idea of having some other genres of music also become apparent in a Jazz music context. One of the reasons some Jazz fusion tracks are perceived as more approachable by listeners is indeed because of these blending elements. I don’t like categorizing music that much but in any case, several moods and backgrounds of myself as a musician derive from other genres such as Latin, Rock, R&B, Soul, Smooth and Classical. This album includes several orchestral arrangements which blend with Jazz passages and other genres alike.

Q: How long did “Sunrises Every Night” take to record, and what was the process like? Did you have more remote recording sessions like you did for “In Your Skin”?
A: The album was recorded in 7 months. I used a quite varied set of instruments and moods in the production. I also added several vocal parts which circle back to my music roots when I used to sing in bands. Vocalizing and singing is a recent feature I reinstated in my latest albums since I consider it as an intrinsic part of myself.
Typically the compositions were focused on each track based on a given musical idea. I usually work along with the arrangement of the tracks as I compose them, since I am the only performer. The recording process involves several layers of productions in order to pave the instrumentation fingerprint to achieve the concept of the song. The already recorded instruments are therefore the reference for the next ones up to come. Also, as I am my own Mixing engineer the mixing process comes hand in hand with some of the arrangements and circle back to perfect the original composition itself. It’s an iterative process. There were no remote recording sessions this time such as in “In Your Skin”,

Q: For many artists, their most popular tracks are not their personal favorites. Does this apply to you, on this album or previous releases?
A: Absolutely!!. I have my own favorites tracks in my album but typically they don’t align well with what the listeners get most engaged with. I understand this perfectly. Music as an art is a very subjective matter. My only driver is to bring music that moves me as a starting point and then let the listeners pick their own favorite.

Q: Who are your main musical influences? Can their influence be seen in “Sunrises Every Night”?
A: I am a lover of the Jazz Fusion genre. I always admired artists like Pat Metheny, Al DiMeola, Herbie Hancock, George Benson, Alan Parsons including The Beatles. Each of these artists have unique music elements I feel attracted to. It is very difficult for me to confirm that these influences can be clearly perceived in my music but they have all enriched me and helped me develop as an artist bringing some of these together with my own style.

Q: If you could change one thing about the music industry, what would it be?
A: I am old school. In my early years in music, if you wanted to be a real musician you’d need to release a physical album. That was what people used to buy in the stores. I understand that this concept does not work like that anymore nowadays. It was wonderful to feel the excitement of going to street record stores, browsing, listening to music, and then purchasing something I’d love, knowing it is valuable for me because it was not available online and is considered something personal. Like a gift from the artist. I truly think that music should be special.

Q: What’s next for you after this release? Is there another album planned for 2022?
A: There is always something out there, I just don’t see it yet but as always, music will surprise me in many ways along the path. My mind is always looking for challenges and new things. In a sense, a never-ending story for me.

Q: If listeners take away one thing from this album, what would you hope it would be?
A: I hope that listeners can truly connect with themselves by listening to the album. These days we don’t allow much of it to happen to us. Let the music be a getaway car at least for a few minutes.

Q: Anything else you’d like to add?
A: Thanks to all those supporting my music for so many years and thanks to The Ark of Music for hosting me today.

<< Go to our full music review of:  Sunrises Every Night by Pablo Embon

Listen to SUNRISES EVERY NIGHT by PABLO EMBON: