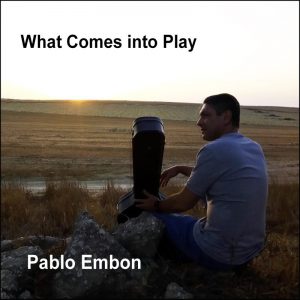 Just last November we had the privilege of meeting Pablo Embon in our interview and review for his album, Funky Side of the Road. We are thrilled that the Israel-based by way of Argentina composer and multi-instrumentalist is back again with his latest project, What Comes Into Play, an artistically blended array of jazz, funk, latin, alternative, world, and other styles.

It’s worth mentioning that What Comes Into Play represents the latest of a 16-ALBUM ANTHOLOGY, which also includes:  2016’s Funky Side of the Road & The World Within, 2015’s Wicked Strings, 2014’s Perennial Sounds, 2013’s Muse Kaleidoscope, and so-so-so much more!

With guitars and keys forming the core instruments of this newest work, Embon has, once gain, composed, performed, and recorded the entire album on his own—a feat that requires an uncanny level of focus and resolve.

Opening with the latin-laced, Baby Steps, this number sounds like something that belongs on the Miami Vice soundtrack (the classic TV show—not the movie). The track’s ultra-smooth bass-line and rhythm set the table for some silky synth keys and guitar, which seem to ooze out of the speaker. The whole thing sounds like The Miami Sound Machine has started making jazz.

Bluesy You is a slow and easy ride through jazz-blues influenced guitar and keys. If you’re gun-shy of jazz, this is the kind of track that can turn you around. 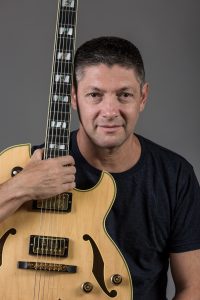 Flogging A Dead Horse opens with a mysterious alt-rock vibe which transitions quickly into a jazzy riff whose piano and guitar improv drift in and out of rock-centered themes. Pulling out the whole of his instrumental arsenal, Embon makes the track acoustic, then electric, then acoustic once more. Very cool.

Wish I Were There is bright and full of life. Be sure to stick around long enough for the slow-down at 3:16, which shows Pablo understands the vital importance of musical contrast.

With an intriguing, adventurous world-vibe, Infinite Raga, caught me by surprise with its Indian-influenced scales and instrumentation—a unique and refreshing inclusion when united with jazz.

The modern jazz number, The Fall, could easily be tossed onto a Guy Ritchie soundtrack.

Our Favorite Track:
Somewhere In This World opens with a worthwhile minute and a half of lone, rolling piano; which then trades places with a latin-influenced classical guitar. The song picks up a bit of steam near the back quarter, winding down with rolling, jazzy keys. As whole, the piece is ambient and adventurous.

Concluding with, Morning T, Pablo sends his fans away with a smile on their lips, and a warmth in their heart. At just a minute and a half, there’s keys only here, and it is delightfully minimalist.

Pablo Embon has, once again, honored his untamed creativity in his latest effort, What Comes Into Play, an aptly titled collection of songs which—while always wading in the waters of jazz—are fed tastefully by contributory streams of Latin, Arab, Funk, and other world styles; creating an exciting atmosphere where virtually anything goes. Embon has also showed his growth in the studio, as the album’s production and mix are truly “that much” better than previous efforts. All in all, What Comes Into Play, is another fine project by, perhaps, one of the best kept secrets in Jazz the world has to offer.

BELOW, you can listen to music from Pablo Embon’s album, What Comes Into Play, and connect with his website and social media platforms. Please support Pablo Embon by visiting him online, and playing, downloading, and/or purchasing his music. And, as always, thank you for supporting real music!

Listen to music from Pablo Embon’s album, What Comes Into Play: