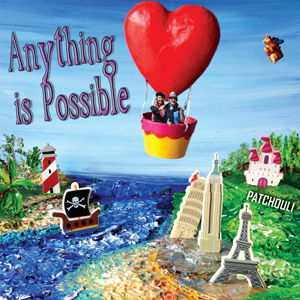 The duo known as Patchouli consists of master guitarist Bruce Hecksel and singer/songwriter, guitarist Julie Patchouli. These two living musical legends have performed over 3,500 live shows, traveled over a million miles on tour, recorded and released 19 CDs, earned multiple songwriting and industry awards, performed on TV, film and are played on radio programs around the world.

That being the case, it’s likely you’ve heard of them, perhaps even seen them perform live. If not, I must strongly urge you to do so. For, the feel-good-vibrations at a Patchouli show are, in my experience, unparalleled. Their authentic, musical light washes over audiences, leaving no mouth un-smiled.

I can still recall my first live show experience with Julie and Bruce. It was 2009, and I was in La Farge, WI for an annual fair event. While walking around perusing the fairgrounds I heard some music playing in the distance. The music grabbed me, and without saying a word to the group of people I was with, I ran across the fairgrounds in the direction of the sound. Moments later I found its source. There, on stage, were Julie and Bruce. I was completely captivated. Now, seven years later, we’re taking a look at Patchouli’s latest album, Anything is Possible. 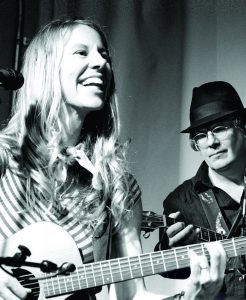 The opening, album-titled track, Anything is Possible, delivers what many have come to know and expect from these two song-smiths. In a perfect, melodic wave of acoustic guitar and vocal harmony, the track sets not only a musical tone for the album, but a philosophical one as well. Julie and Bruce explain that change is inevitable. The good news is that the fear we feel in the face of change can be turned into hope, with a simple decision…

Track four, the beautiful ballad of unconditional love, After After All, builds slowly. Finger-picking, Julie’s voice, violin, percussion, chorus. As the melody progresses, a sky-full of memories sweep over and ask permission to be set free. Walls crumble in the presence of music like this. Only the lifetime of tender sharing that Julie and Bruce have offered the world could’ve taught these artists how to create something so simultaneously tangible and ethereal.

True to the project, Away We Go, is a rhythmic ode to faith and perseverance in times of mystery and doubt. Patchouli reminds us that sometimes one must dig-in and stick it out, for the sake of everything.

Hobo’s Lullaby is sweet and soft. Julie’s light finger-picking, Bruce’s solo leads dance and flutter about, and a touch of percussion create an affecting end-of-the-day ambiance. 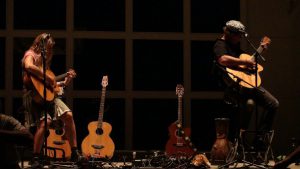 The final track is a newly recorded version of an old Patchouli classic. The Woods originally appeared years ago on their album, The Summer Finding. The song is an anthem for the natural world and the healing powers offered in quiet places outdoors. This new version brings with it a touch of keys and electric guitar. It is a lovely return to an epic classic.

Ultimately, Patchouli’s Anything is Possible shows that these two wise troubadours of the music universe continue to evolve, to change, to grow. With refreshing honesty, they make it clear that this isn’t easy…even for them. And, in bravely continuing, year after year, to share their joy and pain, they remain a beacon of light and honesty for so many.

(By the way, this busy duo also has an alter-ego Spanish/Flamenco guitar project known as Terra Guitarra. Check it out—it’s fantastic.)

Below, you can listen to music from Patchouli’s album, Anything is Possible, connect with them on their website and social media platforms, watch their music video, check out their live show/tour schedule, and find their booking & contact information. Please support Patchouli by visiting them online, and playing, downloading, and/or purchasing their music. And, as always, thank you for supporting real music!

Listen to music from Patchouli’s album, Anything is Possible:

Watch Patchouli’s music video for the song After, After All: