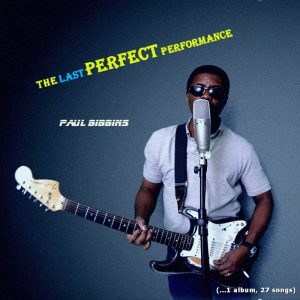 Born in New Orleans but currently living in the Dallas area, solo artist Paul Bibbins has been a musician for most of his life. Taking up the guitar as a teenager in 1973, Bibbins believes much of his most creative work was developed in his earliest years of refining his craft, and he still works with and develops the ideas he created back then. Case in point – a few of the songs on his latest record, The Last Perfect Performance, date back 40 years.

The Last Perfect Performance is an extensive work of love and labor by Bibbins, taking up to a month to finish recording some of the included works. The project is an astounding 27 tracks long, and it includes 7 new tracks written in 2021, as well as the entirety of two of Bibbin’s previous albums. This resulting massive triple-album runs the gauntlet of Bibbin’s musical style – syncopated, uncompromising, and truly self-driven classic rock with a hardened edge.

From the first track through the last, The Last Perfect Performance is wholly Bibbin’s unique brand of heavy, retro-influenced rock. He doesn’t shy away from experimentation within his chosen brand of driving, gritty guitars, and smoky vocals – rather, he leans into unusual rhythms and unconventional time signatures in a way that’s not often seen in rock music today. Early on this can be seen particularly clearly in Come and Go Babe, embracing a range of eclectic time signatures throughout that, while never predictable, still has a considerable amount of cohesion and flow.

The title track The Last Perfect Performance is also an early standout. The strummy intro and slow build give it a slightly different texture than the surrounding pieces, and its progression feels almost orchestral as it works back and forth between primary sections like movements of a symphony. It’s well thought out, and it still retains decidedly prog-rock roots and keeps an electric guitar at the center of it all.

Uniquely, Bibbins says that he doesn’t write songs that come from personal experience. While his lyrics won’t give you much insight into his life, they do give you plenty of insight into his songwriting abilities. While much of this project is riff-focused, lyrically there are most certainly stand-out moments – like in Insight (Part 2), for example. We get a touch of poeticism and a believable feeling of rawness and vulnerability in the verses of this track:

“Well the fire in a man’s heart is the cutting room floor,
So if he tells you what he feels,
You’ve come upon so much more,
And as you see the steel curtain fall,
Fire the shot that touches his soul,
Fire the shot he’s gotta be told,
All life is in“

We also like Eagle’s World Blues for bringing in a hearty dose of classic blues riffs and rhythms – and the familiarity brings a welcome balance to the project. And those moments also prove that Bibbins can play within the “rules” when he wants to… but the rest of the album proves that he certainly doesn’t need to.

Hiding all the way down at #27 and closing out this extensive work is Bibbin’s cover of the Hendrix classic Voodoo Child. It’s clear that this iconic ’70s sound has had a significant influence on his own work – the heavy distortion, the ripping solos – it’s all in the tracks that lead up to this hard-hitting, satisfying conclusion. 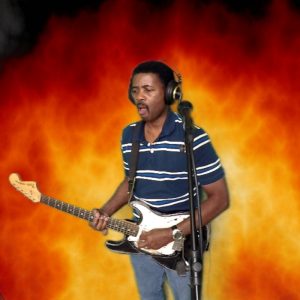 With three album’s worth of material to choose from, it’s difficult to pick a singular favorite. We like Ever The Fire, Forever The Wind for its slightly psychedelic undertones, Dreamin’ is Flyin’ for its particularly catchy and cutting opening riff, and Bibbin’s cover of The Star-Spangled Banner for its completely free-form expression of the ultimate classic for lead guitarists. And there are still over a dozen tracks that we’ve yet to touch on – if you’re into boldly pushing the limits of expectations for what a three-piece rock arrangement can do, we think you’ll find quite a few favorites on this project as well.

Paul Bibbins is an artist who knows what he likes and knows how to execute. Rock fans – get comfortable with being out of your element, embrace the unfamiliarity of the non-standard rhythms, and don’t be surprised when you find yourself enjoying something new and verifiably unique. The Last Perfect Performance is a successful blend of artistry and musicianship, and fans on both the progressive rock and classic rock ends of the spectrum will find work that resonates with them here.

BELOW:  Listen to The Last Perfect Performance and connect with his website and social media platforms. Please support Paul Bibbins by visiting him online, and playing, downloading, and/or purchasing his music, or attending a live show! And, as always, thank you for supporting real music!

Listen to THE LAST PERFECT PERFORMANCE by PAUL BIBBINS: