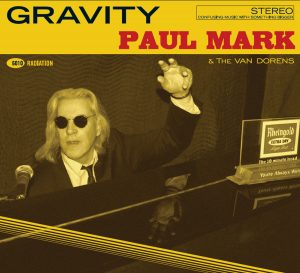 It’s always a pleasure when the work of truly gifted songwriters makes its way into our hands. The musical stylings of Paul Mark unequivocably fall into this category. As a songwriter, producer, and musician himself, Mark has been garnering praise from audiences and critics alike for years, and his most recent project (and 11th commercially-released album) should be no exception to this rule. Gravity is an unabashedly brilliant collection of music that highlights all of the best features of Mark’s musical capabilities.

Backed by his urban blues/rock/roots band The Van Dorens – a regularly changing group of exceptionally talented musicians and engineers – Gravity explores an incredibly wide variety of genres without ever feeling disjointed as a composition. With influences ranging from rock and soul to country and cabaret, this seems to embody Mark’s prolific performance history, as he’s performed over a thousand times with his band in the past few decades. All of the years of refinement and development of his style come to a head in Gravity. This is a record for musicians, for lyric-lovers, and for seekers of eclectic storytelling and boundary-pushing music. 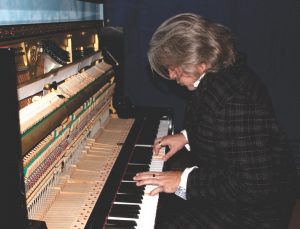 The album opens with absolute vigor and vivacious energy – an almost cinematic timbre in the air around the opening notes. In the very first lines of this record, the entire tone is set – a bit fantastical, a bit theatrical, and wholeheartedly fervent. This track Gravity is Failing feels as though it belongs somewhere between a silver screen depiction of an old-timey saloon and a seedy traveling circus. It’s bold and perhaps just a touch raucous, but not at all unrefined despite this. Mark’s vocals are on full display in this opening track as well – ragged, smoky, intense – the near ridiculousness of the message in this track is wonderfully counterbalanced by such a serious and impassioned vocal performance. It’s the perfect blend of thespian flair and true soulfulness.

Coronation takes on a very different sonic angle but maintains the theatrical atmosphere, and as an instrumental, it’s an interesting inclusion on the album. The organ line showcases the instrument as dramatically as it can be displayed, starting with a dark and foreboding sequence and building into something more reminiscent of the regal ceremony brought to mind by the title. The placement of this track directly before (and blending seamlessly into) Con Man VIP is another symbolically suggestive choice, as the former invokes images of majesty and the latter the literal opposite. This track quickly settles into a driving blues-rock rhythm, in stark contrast to the previous track. The story here is an intriguing one, as we’re told of the rise of a snake oil salesman, a rightly named title character, and with the placement of these two tracks together the second track seems to be fully suggesting corruption within the ruling class.

We also love You Can Take It With You for the levity on a topic that is usually presented in a heavier sense in popular music. The idea that you can take all of your earthly possessions with you to the afterlife is not only discussed in a particularly amusing way, it also causes the listener to stop and think about the meaning of the famous phrase as well as the implications. There’s the slightest hint of a serious undercurrent to this honky-tonk, classic country-sounding, jovial tune.

The Next Fight is a showing of truly illustrious lyricism, combined with an arrangement where each element of the song’s musical makeup contributes effortlessly to the underlying story. The slow and battered bluesy drive of this track paints a picture of a man whose soul remains intact but whose heart is no longer in any kind of fight. In the tired (but never lazy) guitar solos, the prominent harmonies (almost sounding like a plea at times), and the clearly intentional space left between so many of the notes (reminiscent of dragging one’s feet) – each component of this composition drives the story home a little further. This track also contains some of our favorite Paul Mark lyrics:

“Your battered bones say it’s time to switch off the light
Promoters claim you owe `em one more fight
The spirit is willing, but you can’t left hook a lie
Or dodge that jackhammer jab on Friday night“

These, carried by the raspy vocals that are a constant on this record really make this one of the most authentic-sounding tracks on the album. It’s an excellent showing of how each layer of this song works with the next, putting all of Mark’s talents on simultaneous display.

A theatrical, cinematic experience from start to finish. Lyrically brilliant, melodically excellent, and a slew of musical performances on every included instrument that could make even the most tenured session players jealous. This is unbridled Americana in perhaps the most authentic sense of the word. Paul Mark is critically acclaimed for very good reason, and Gravity only stands as a testament to his accolades. There’s a little something for everyone on this record, and you’ll likely find the song for you has notes of levity and sincerity, pulled together by the exquisite songwriting that is truly at the root of this album.

BELOW:  Listen to Gravity and connect with their website and social media platforms. Please support Paul Mark & The Van Dorens by visiting them online, and playing, downloading, and/or purchasing their music, or attending a live show! And, as always, thank you for supporting real music!

Listen to GRAVITY by PAUL MARK AND THE VAN DORENS:

Share PAUL MARK AND THE VAN DORENS with your people: