Many artists try to evoke feelings in their listeners, but it isn’t often that the desired feeling could be a degree of fear. But for Illinois-based electronic music producer Em Baker, darkness is at the center of her music. Under artist name P’like, Baker has recently released the album Soteria, and it is a collection of experimental electronic tracks that are haunting – at times almost frightening – but rooted in well-written music and backed by excellent production.

Baker’s musical education started very early, taking piano lessons at the age of five. She dabbled in drums, bass, and guitar before discovering her love for electronic music production in her early 20’s. Baker writes, records, produces, and mixes all of her own tracks, and her experience shows on her latest release. Soteria is P’like’s first album recorded with multiple collaborators, and while each of the tracks has their own unique flair, the dynamic, gothic undertones that are distinctly P’like sounds are at the heart of this album. 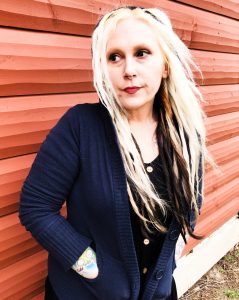 From the first seconds of Candy Cigarettes, it’s clear that when P’like says dark electronic, the emphasis is on dark. The intro is haunting, building anticipation like the opening scenes of a horror movie. And as the song progresses, we’re given a mix of both modern electronic sounds and a smattering of unsettling effects that are spine-chillingly present but don’t overwhelm the musicality of the track.

Sanity Meter verges more into dark-pop territory, where the goal is not just being unsettling, but rather more traditionally artistic expression. That’s not to say that the breathy vocals and whispers don’t foster a bit of a sense of unease.

The Real Plot features multi-instrumentalists and vocalists Joakim Aaberg and Marcus Lilja, and treats us to a more lyrical focus than some of the previous tracks. You can hear where their melodic influence gives this song a different timbre, but it combines nicely with the driving, booming drum beat, and variety of background synths and effects that have come to sound like P’like signatures.

We don’t feel bad in admitting that the unexpected growl in the intro of Baku-San, Come Eat My Dream made us jump, nor do we feel bad that the child’s laughter quickly following made us turn all the lights on. This track feels like it’s right out of a horror movie, but in all the right ways. There is suspense, intrigue, and dissonance that keeps you on the edge of your seat. But it is still grounded in musicality, so the song never loses that melodic familiarity.

Expertly produced. Haunting and intriguing. P’like has a unique sound and style that brings the element of unease into her music without losing the melody itself. Immerse yourself in a world of dark soundscapes with Soteria. For those interested in music that pushes the boundaries of the expected, in a genre that is eclectic and underrepresented in the music industry, this experimental electronic piece is an album to listen to. Check out Soteria below.

BELOW:  Listen to her album Soteria and connect with her website and social media platforms. Please support P’like by visiting her online, and playing, downloading, and/or purchasing her music, or attending a live show! And, as always, thank you for supporting real music!

Listen to SOTERIA by P’LIKE: