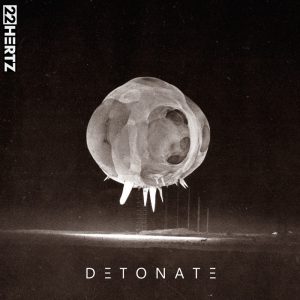 Below, you can read our interview with Ralf Muller of 22 Hertz, and listen to their single, Detonate. Check out our full music review of Detonate, HERE.

Where/when did your musical roots sprout? Was it family…friends…fantasy? When did you decide you wanted to be a rock star?
No, not family or friends. I grew up surrounded by a non-musical environment. I did notice that I was able to play an organ really fast after learning at a local Woolworth when I was maybe 5 years old. I never wanted to be a rock star, more a guitarist in a band or something. However, just before I began the 22HERTZ project, I caught myself saying (after watching a music video), “I can do that, and even better. So I want to be a rock star too.”

You were originally with a heavy metal band called Point Blank. What happened there? Artistic differences? Family stuff?
Yes, it was my first serious attempt to embark on the journey of a musician. It basically fell apart because no one in the band wanted to make it as bad as I did. I tried hard for five years. But a band, just like a chain, is only as strong as its weakest link.

22 Hertz was born in Montreal in 2010 as your exclusive, solo effort. What inspired you to go solo, and what inspired the name 22 Hertz?
Life lesson #1:  You can only count on yourself. That’s why I went solo. At least this way, shit is gonna get done. Less shit cause I’m by myself. But none the less, it’ll get done.

Being a musician/recording artist myself, I know how challenging it is to record an entire album on your own. Tell us about your process. How long did it take?
Oh god, I moved out of Montreal just before the album was finished writing. Then, I had to do six hour car rides back and forth to the studio I hired to mix it. What a nightmare, never doing that again. 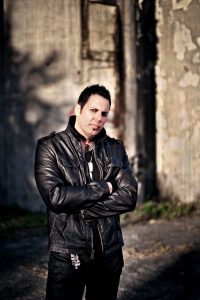 Your live show band is made up of five talented guys. Where did you find them? Was it a lengthy audition process?
I’m still looking to complete the permanent lineup. It is very hard to find someone, even if you pay them! Incredible.

Your sound gets comparisons to Nine Inch Nails—an obvious compliment. From an artist’s perspective, do you enjoy comparisons like that, or would you prefer to be unclassified?
You mean when 22HERTZ gets compared to one of the best rock bands ever? Yeah, I like it. But to be totally honest, other people’s opinions are none of my business.

What artists have most greatly inspired your work?
Well NIN, especially live, introduced me to songs that can be very heavy without it being heavy metal. Songs can be made heavy or powerful with synths and texture choices. I come from a heavy-metal background, so I need powerful sounds. Steve Vai opened the door to my imagination in both melody and rhythm. But there are many other bands that influence me in ways I’m not even aware of.

Can you tell us about the first moment you picked up a guitar?
Yeah, it was after a camping trip. I saw a guy playing an acoustic guitar around a campfire with his friends, and they were singing. I thought that looks so fun! I can’t wait to get back to do that with my brother’s guitar (he got one for his birthday but never touched it). So, when I finally tried it—noise! I tell ya, noise of the worst kind!

What was your first guitar? Do you still have/play it?
I don’t remember much about my first guitar, but I know it was the shape of a Les Paul.

Perhaps in some unspecified amount of time, your musical career explodes in the best of ways…what does that look like for you?
I guess some serious touring, maybe collaborating with other artists.

You get to collaborate with any artist of your choosing—dead or alive. Who is it?
Off the top of my head, Trent Reznor.

Your favorite album of all time?
Passion and Warfare—Steve Vai.

Your favorite song of all time?
Whispering a Prayer Live in London—Steve Vai.

What would you like fans to know about you that they’re most likely unaware of?
No one in the industry is helping me with anything.

Any shout-outs you wanna make?
Learn about bitcoin, kids.

Anything else you’d like to add?
We never die.

Listen to Detonate by 22 Hertz: