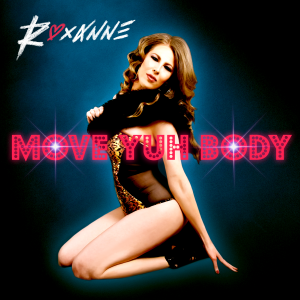 Below, you can read our interview with artist Roxanne, and listen to her single Move Yuh Body. Check out our full music review of Move Yuh Body, HERE.

Q: Great to be talking with you, Roxanne! You’re based in Ottawa, Ontario – how is the music scene there and how has it affected your own musical endeavors?
A: Ottawa’s music scene is diverse regarding music circles, genres, and opportunities. From small music venues, legendary venues, to festivals, the Ottawa music scene offers a great variety in performance settings for artists. Performing on many stages from my beginnings in classical music and opera at the Ottawa National Arts Center to performing in bars and clubs, and festivals as a singer-songwriter, I’ve learned to become a better performer by adapting my performances based on the music genre, the type of event, performing on various stages, and for different audiences. Passionate for many music genres as a songwriter and performing artist, Ottawa’s diverse music culture continues to offer a space for these different genres to be showcased. Though Ottawa is a smaller music city than Montreal and Toronto, Ottawa does hold its own. This music diversity has helped me become a well-rounded music artist, and like the evolution of my musicianship, my musical endeavors continue to expand as I continue seeking new opportunities to experience within the music scene.

Q: Your roots as a performer are in classical and operatic styles, but your most recent release Move Yuh Body is decidedly an electro-pop tune. How did you end up working in such contrasting genres? A: Before embarking on studies in classical music and opera, I was a big fan of dance music, disco, pop, and R&B. I only got into classical music and opera as it was the genre of the program offered in the art school I attended. But, when it came to writing my own original music as a singer-songwriter, I think it’s fair to say that I went back to my original roots as a music enthusiast and re-connected with popular music. Developing a deep appreciation for classical music and opera as a performer throughout my University studies and early career, I also was aware that I had a deep need and desire to express myself through my own original music, and when it did, it came out in the genre of electro-pop. I guess you can say that writing in this music genre was a bit like my artistic alter ego from the classical and opera music realm. Though these two genres are worlds of their own, and are musically worlds apart, they both offer something unique, and represent different sides of me as a person and as an artist.

Q: Alongside your solo project, you have both a reggae band Nile Groove, as well as a neo-soul band The Roxanne Project. Your artistic range is impressive! Is your solo work your main focus?
A: I think, in part, my solo work is my focus. Even though I never made my solo work public before the releases of my solo singles “Like Suga” “Take a Ride”, and “Move Yuh Body”, my solo work is how I began songwriting. At that time, because I really enjoyed being part of music groups which is what lead me to finding Nile Groove, I choose to put my solo work aside and focus on Nile Groove. After writing and producing “Uncovered” and “Insatiable”, my two albums with Nile Groove, I felt it was time for me to re-focus on my solo work songs, so alongside writing songs for a third Nile Groove album, which is upcoming, I also focused on making “Love Rebel”, my upcoming debut solo album which will be released in 2021. After writing the songs for “Love Rebel”, I wrote more songs but as these touched on the neo-soul genre; I decided to form “The Roxanne Project”. Currently, I’m focusing on balancing all three projects because I love how they provide opportunities to challenge me artistically to further develop my skills as a singer-songwriter, producer, and performer, and I also really enjoy the unique experience each project brings. My view is that all my original work, whether with my bands or as a solo artist, represents my versatility as an artist and my passion for musical diversity.

Q: The pop stylings of your most recent work seem to be a newer style for you – do you plan to continue in a pop direction as a solo artist, or are there other genre influences that you might want to include in future releases?
A: I’ve always been and will always be influenced by many music genres, and love pushing my creativity and artistry forward. All the genres of my songs mirror what I’m feeling at that time I write my songs, so all music genres or stylings are possible with my solo work or my work with Nile Groove and The Roxanne Project. Although I do plan continuing in the pop direction with my solo work, I’m beginning to add stylings including trap, and R&B to the new songs I’m writing. I also think it’s really interesting to see what’s coming up in my songwriting during this pandemic. So, I’m really excited for the future to share my upcoming tracks with fans.

Q: What is your songwriting process like? Does it vary based on which project you’re writing for?
A: My songwriting regardless of the project, whether being my solo work, my work with Nile Groove, with The Roxanne Project, or collaborations with other artists, is very consistent. It generally begins with a beat and a melodic line with a few lyrics that dictate what the song is about. I expand the song more by letting creativity flow freely, singing anything that comes through that creative wave. During that exploration process, parts of the song are organically created, whether it’s a melody for the chorus, verses, bridge. I then further explore these parts by finding chords on the piano choosing which chord patterns fit the song best while offering sonic variety. When the song has a defined structure, I write the lyrics. I then record the song through digital music software and begin to think about instrumentation and develop instrumental motifs or hooks. If the project is for Nile Groove, or The Roxanne Project, I bring the demo to the group where they can expand on it. If it’s my solo work, I bring the demo to the studio and begin the recording process.

Q: How long did “Move Yuh Body” take to record?
A: “Move Yuh Body”, like most of my songs was recorded in one session. It was the first song recorded from my released singles and the first song recorded as we began recording my upcoming “Love Rebel” album. I’ll never forget how much I was looking forward to getting in that vocal booth to sing it and also doing the production work on it. It probably is the most fun I’ve ever had recording a song to date in studio, perhaps because I knew that I was finally working on my solo work, and it was the beginning of eventually having my first solo album.

Q: Perhaps in some unspecified amount of time, your musical career explodes in the best of ways. What does that look like for you?
A: That’s a great thought. For me, living the music dream would be having abundant and accessible resources and financial means to focus on creating a life creating music and performing music in a much bigger way. It would consist of performing internationally on big stages; songwriting for my solo work, my bands, television, and the dramatic arts; collaborating with established artists, working on a variety of projects including cross-overs; creating and producing more music videos, creating music documentaries and/or music docu-series, and appearing in a film as a singer-songwriter; being a speaker on music and help new artists in the music industry; writing an autobiographical literary work of my life and music journey, and also giving back through philanthropy initiatives and projects.

Q: You get to collaborate with anyone of your choosing. Who is it?
A: I would love to collaborate with Lady Gaga. I have a lot of respect for her as an artist. She is a brilliant singer-songwriter, performer, and can sing and write in any genre. Even though she is considered a pop artist, her range within pop music is extensive as she includes fusion and various pop stylings. I identify with that creative need to express something different by accessing different sonic palettes and hope that that collaboration could happen one day.

Q: Your favorite album of all time? (Yup, you gotta choose one.)
A: There are so many but since I have to choose one, I choose “Much Music Dance Mix ‘94”. It was the first album I bought and the “Much Music Dance Mix” series also enhanced by the Much Music video revolution was the original playlist in cd format back in the day. It gave listeners a variety of options regarding listening to various artists and songs all on one single album.

Q: Your favorite song of all time? (Again, only one!)
A: Again. There are so many songs I love but, to choose only one, I’d choose “The Sweetest Taboo” by Sade because I love Sade and her music, and have listened to that song on “The Best of Sade” album countless times. It’s a classic.

Q: What would you like fans to know about you that they’re most likely unaware of?
A: This may come as a surprise but I’m actually a shy person.

Q: Any shout-outs you wanna make?
A: I want to send out a huge shout out to recording and mixing engineer, Jason Jaknunas from Ottawa’s Metropolitan Studios; to mastering engineer, Waleed Abdulhamid from PHS Studio in Toronto; and to Ottawa-based percussionist, bass writer, and group members of Nile Groove and The Roxanne Project, Salah Adem for helping to make all of it happen. I’d like to thank my fans for their continuous support. You know I love you. And, last but not least, I’d like to send a big shout out to you guys for this music interview.

Q: Anything else you’d like to add?
A: I just want to thank the readers for checking out this interview. Also, I’m inviting everyone to follow me on my social media to know more about me and my upcoming projects. Be on the lookout because I’ve got a lot of new music coming your way.