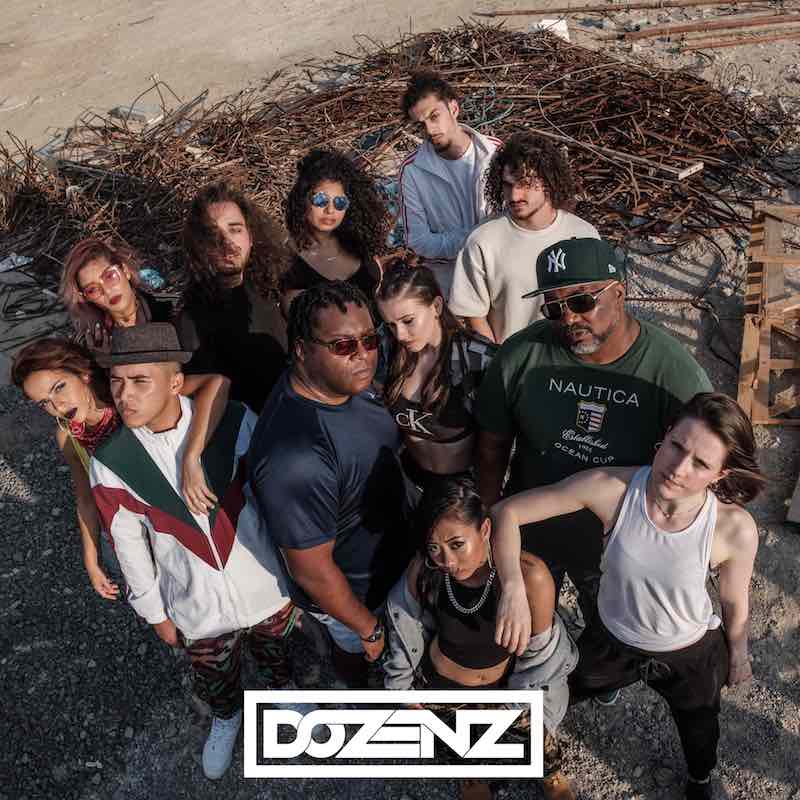 Below, you can read our interview with Dozenz, and listen to The Album. Check out our full music review of The Album, HERE.

Q:  Saleh Hamed, you were Born in Birmingham, UK, but consider your official hometown to be Abu Dhabi, the capital of the United Arab Emirates. It sounds like there’s an interesting story there, care to share it?
A:  My dad was in the military so we moved around.  He met my mom when he was in the UK, they got married, had me in Birmingham and then we moved to L.A. for a few years. Stayed long enough to become a life long Lakers fan and then we moved out to Abu Dhabi and to a military township in the middle of the desert. We would have to commute 40 minutes a day to get to school straight drive (50 km) or to go grocery shopping. My mom would play music on the drives. She was really into Motown, Carly Simon, Simon and Garfunkle, George Michael and any contemporary singer/songwriter type of music. It is during those car journeys that I built up my music understanding. Although my mom didn’t know any of the “technical” terms (like kick, snare, chord etc.), but she had a wonderful way of pointing out that things that stood out for her, like the “hooks”, so my mom became my music theory guinea pig. I would play her music and ask her what she was feeling, experiencing, etc., and learn about drops, choruses, drama, pacing etc. That’s also where I started writing lyrics (poetry and short stories first), because there really wasn’t much to do in the UAE in the mid 80s and even less in the middle of the desert. A few years later I moved to Leeds to finish up high school (fifth and sixth form they called it) where I became a life long Liverpool supporter (McManaman!). It’s in Leeds that I discovered Radiohead and Oasis and drifted away from my very hip-hop soul. I tried to get into the local band scene there but couldn’t play anything so my first gig was helping produce my friend’s band, Yellowshop. It was fun but brief. I moved to Nottingham and its University next. Luckily my flat mate was a guitar player and loved Radiohead too, and some Oasis, so he taught me Wonderwall on guitar and I was off.

Q:  You’ve engrossed your musical aptitude into everything from hip-hop, to alt-rock, to pop. What artists in each of those respective genres has inspired you most? Is there a genre, style, or influence that feels most at home to you?
A:  Tough one because I have a lot of sources of inspiration. In general, I’m always impressed by anyone who can write and sing what becomes a standard “pub song”, you know the ones bar bands will play anywhere in the world (Sweet child of mine, Hotel California, Wonderwall, No woman No cry etc). My first big music love was The Beach Boys. The harmonies they did are so rich and I would take turns listening to each track and trying to figure out the different singing parts.

In hip-hop I think my start was Run-DMC, who were the coolest thing happening when I was a kid in LA, but then I drifted more towards the R&B, Funk and Soul side in those car drives with my mom listening to Motown, James Brown, Stevie Wonder. Later, the whole New Jack Swing era really excited me with bands like Blackstreet, BoyzIIMen, TLC, and Jodeci. You can hear it in my tracks where I’ll throw a rap in the last prechorus. I think Kanye West is the artist I draw the most inspiration from now. His tracks always seem to be pushing boundaries and breaking them. I like that, no limits. Rapping wise though I’m 100% a HOVA fan, Jay-z is just a great entertainer, lyrically. Rock wise I’m an unashamed Anglophile. The usual suspects: Starts with The Beatles (No Rolling Stones, sorry) U2, Oasis, Radiohead, Embrace, Manic Street Preachers, Ash (they should have been bigger!), Blur, The Verve, Stereophonics, Muse and Coldplay. But I have a soft spot for Crowded House, INXS and Tears for Fears too. I love big productions and producers who create unique sonic identities for their tracks (Nigel Godrich, Brian Eno). Pop wise I think it’s the producers who I was into, so George Martin, Quincy Jones, Jimmy Jam and Terry Lewis, Teddy Riley, Max Martin, Pharrel, Timbaland, Dr. Dre, Darkchild etc. Because Pop changed over the years it’s hard to lock it down, but I am willing to admit I was into Take That, N*Sync, Britney Spears and all the “Now, Thats….” mainstays. I always wanted to reach people and so Pop held the secrets to connecting with an audience.

Q:  Your current stage moniker, Dozenz, has multiple special meanings for you. Please explain..?
A:  Dozens is a trash talking game we played as kids in the states (did not know it was called that ’til later) Funny enough, Arabs have a similar game too. I think it might be common in other places too. I was in a band that was very successful in the middle east and then quit to do other things. During my down time I started doubting my abilities (was it all a dream? Fluke). Something snapped and I wrote about 30 songs in the space of a few weeks and I really liked them. Decided I would challenge myself to do an album of Dozens of songs, working with dozens of collaborators and have dozens of hits. So, Dozenz. The spirit of the project deep down is challenge and response hence the link to the trash talking game. I have something to prove to myself or the world will prove me wrong. 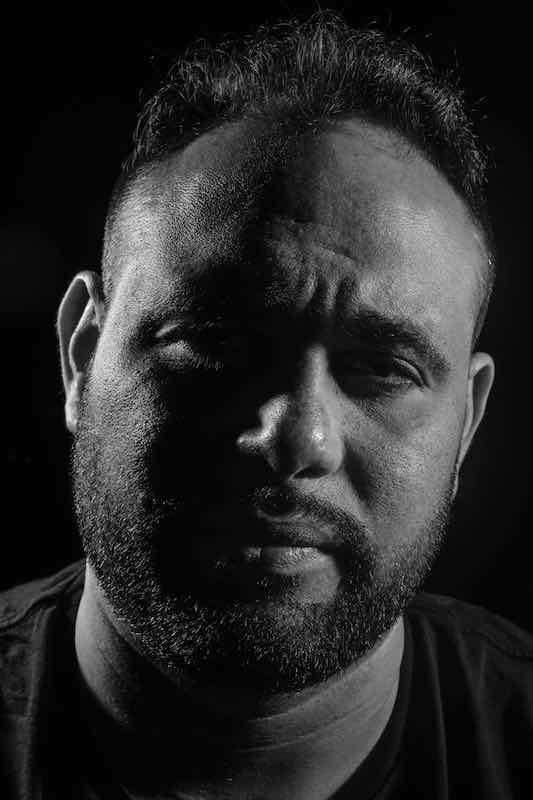 Q:  You’ve likened your efforts with Dozenz to that of Moby or Fatboy Slim. Meaning: you do all of the songwriting and production, but correspond with other vocal performers to bring out the final magic. Explain your collaboration process. How are you meeting and interacting with your collaborators?
A:   Both great producers who had a sound, but moved around genres and mixed and matched as they pleased. I write the songs including lyrics, top-line, and do a production of what the vibe of the song will be. Then I will find a vocalist from my local community or online and do demo with them. Sometimes I’ll find the right singer straight off the bat, sometimes I’ll try half a dozen. I’ll keep going till I find the right vocals. Then, I’ll rebuild the track around the vocals. For example, Need Nobody was originally written for one male vocal performance but ended up being a male and female and the female vocal is the more prominent. Sometimes I’ll get a vocal and it will inspire a completely new track. Once the track is rebuilt then I might bring in some instrumentalists to add some extra “flava”. For example on Bigger Than Life and Thug For You I really wanted the drums to have an authentic rootsy feel.

Q:  There are a dozen people on the The Album’s cover. Was that by coincidence? Who are they? What roll(s) did they play on the record?
A:  When I had finished Need Nobody and worked with a local director and some very talented school kids for the video I realized there was a lot of hidden talent in the local community. I wanted to showcase the local style and the street art. Everyone of the people in that photo are struggling artists (one of them, Fafa, is currently breaking out and doing well for herself). They had all contributed or were contributing to the Dozenz collaboration ethos, and we were building stuff in the literal and figurative desert (hence the building site location)

Q:  Does music pay the bills or is there also a j.o.b. in your life as well?
A:  There is a J.O.B. for sure. In the UAE the opportunities for supporting yourself with music are tremendously limited. We don’t have the infrastructure or market size at the moment. But also, if you aren’t Taylor Swift does music pay anyone’s bill’s anymore?

Q:  Perhaps in some unspecified amount of time, your musical career explodes in the best of ways…what does that look like for you?
A:  All my tracks get licensed, covered, played insanely and I can do music 100% of my time. The dream is I get a phone call from Taylor Swift and she wants to work on an album together. I have listening parties with Nigel Godrich and Brian Eno. Dozenz becomes a collective and brand all of its own with DozenzX Talks (like TedX). We build a legitimate music industry in the middle east and start exporting A-Pop (like K-Pop but with Arabs). Kids all around the world now have Arab pop cultural icons and we build bridges between communities everywhere.

Q:  You get to collaborate with anyone of your choosing. Who is it?
A:  Bruno Mars. That guy is the ultimate pop vocalist and performer right now. Uptown Funk is a wonder.

Q:  Your favorite album of all time?
A:  Tough. It will change but there are a few that always are in contention (Ok Computer, Rush of Blood to the Head, Revolver, Pet Sounds, The Black Album, What’s the Story?, etc.) but the best album IMO is Kid A by Radiohead. It’s a complete, unified, distinct and cohesive whole that is immediately engaging and relentless in its execution. No one has managed to take such a hard right turn in the middle of their career and do it so well (Achtung Baby has some bright spots but the album is patchy).

Q:  Your favorite song of all time?
A:  Lover, You Should Have Come Over by Jeff Buckley. I love great, evocative lyrics and this song is a masterclass in all meanings of the word. The intro creates a world to explore in less than 5 seconds, the vocal performance is way beyond Jeff’s years at that point, the structure of the song, the instrumentation and the actual recording are all timeless.

Q:  What would you like fans to know about you that they’re most likely unaware of?
A:  I don’t care about making money from music and will work with anyone who wants to collaborate. I love music for music. I never claimed any of my royalties for any of the albums I worked on.

Q:  Any shout-outs you wanna make?
A:  Shout out to my longtime collaborator and sounding board Ahmed Jamali! He keeps me in check musically and constantly encourages me to raise my game.

Q:  Anything else you’d like to add?
A:  I am Sudanese, Turkish, Irish, English, Emirati and have lived on 3 different continents during my life. I have had to deal with being the fish out of water all my life. The music I make comes from all of that. It’s a mixed bag because I’m a mixed bag. My music is my truth and an honest reflection of all my influences during my life. Not many people have my type of history and background, but they are out there and I hope we find each other (maybe through the music) and discover we aren’t alone.

<< Go to our full music review of:  THE ALBUM by DOZENZ

Listen to THE ALBUM by DOZENZ: